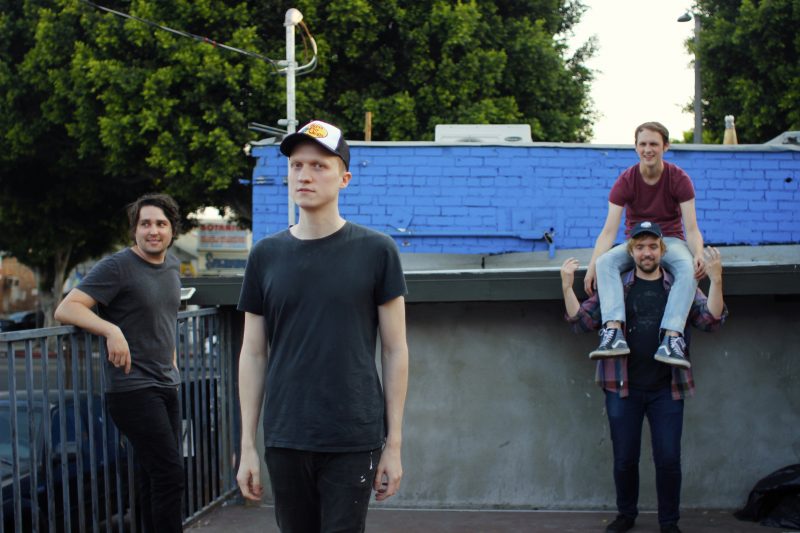 Los Angeles-based musician Kenny Becker, known by the moniker of Goon, just released his debut EP Dusk of Punk and it’s sounding all sorts of awesome. The six track EP has a variety of enticing flavors that result in a never-a-dull-moment kind of experience. With Dusk of Punk, Goon reaches for all your senses; and it’s no surprise as Becker has a medical condition that periodically deadens his sense of smell and hearing. Well, that’s not the case with Dusk of Punk. From the lo-fi sounds of “Dizzy” to the approachable indie pop-esque stylings of “Green Peppers” and then the brash punk of “Merchant Hall” — Goon serves up a unique blend of all the awesome sounds.

“I try really hard to be true to the songs I write, if that makes sense,” shares Becker. “For example while writing “Green Peppers,” I had this urge to take it a more traditional rock n’ roll route, but felt deep down that it was asking for a more rowdy-strummed classical guitar with eclectic synth tones thing. It was weird to do at the time, but I’m glad I stuck with it. That ‘truthfulness’ seems to be a trait that is common with artists like Pixies and Boards of Canada. Those two are easy inspirations for the EP.”

With music so rich and full of variety, Goon’s musical influences don’t stop at Pixies and Boards of Canada. Equally iInspired by prolific acts such as Nirvana, Radiohead and Pavement, Goon has also pulled influence from sounds that aren’t directly heard in his Dusk of Punk EP. Noted as one of his “most exciting musical discoveries,” Goon credits bossa nova as an influential sound from outside the traditional sphere of rock ‘n’ roll, that has provided him “with some beautifully dark chord voicings.”

It’s this type of out-of-the-box thinking that make Goon’s Dusk of Punk EP such an interesting and fulfilling listen. Whether you love the slow burn of the drumless “Scab” or the pent up chaos of “Merchant Hall” — Goon’s debut EP is a solid introduction that leaves the listener curious for more.

Goon’s Dusk of Punk EP is out now digitally and on CD. The EP is also available as a “Mystery Box Edition” cassette. The cassettes are dual colored and also have hidden songs on each side.

“There are multiple variations of which secret songs will appear on the cassette,” reveals Becker. “There are a total of 5 songs that people might receive. Some are even in reverse so unless you have a player that can play the cassette in reverse, you won’t be able to know how it actually sounds.”

Goon are currently working on their full-length album and planning a West Coast tour in January. The band have an upcoming Los Angeles show date scheduled for October 21 at The Echo. Rumor has it, it’s going to be Halloween-themed, and surely not to miss. Get your tickets here.

Stream Goon’s Dusk of Punk EP below and / or purchase a physical copy via Goon’s Bandcamp page. For more Goon updates and tour news, follow Goon on Facebook.