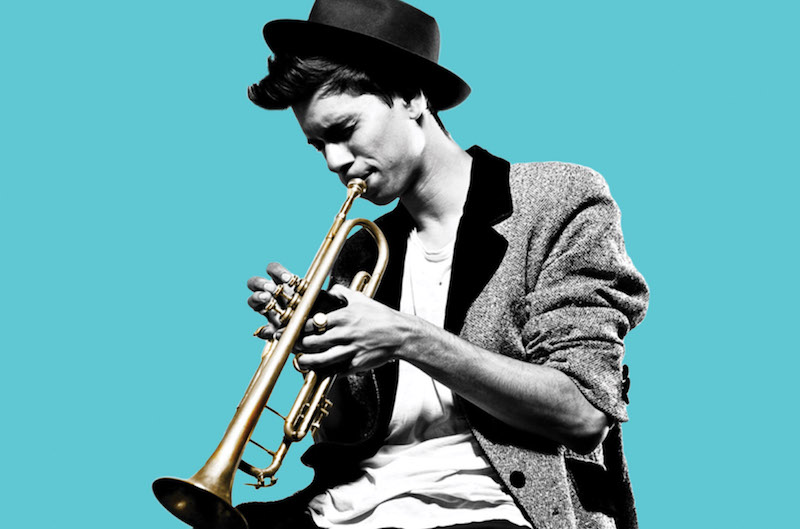 Even if the name is unfamiliar at first, chances are you’ve heard Spencer Ludwig’s signature trumpeting long before you even knew there was a man behind the horn. In a world in which instrumentals are as easily recorded as pushing a button on a keyboard, Ludwig’s ever-shining presence both in the studio and onstage has become the rarest of phenomenas in recent years. From the lyrical clarion trumpeting he contributed to Capital Cities’ debut Tidal Wave of Mystery, to the ridiculously exhausting roster of acts he’s shared the stage with (basically Portugal. the Man to Fitz and the Tantrums, and everyone in between), Ludwig has spent the last five years building his repertoire as the go-to trumpeter for the biggest names in indie-pop.

It wasn’t very long ago that Ludwig was working through his jazz studies at the California Institute of the Arts, paying his way through school by giving music lessons and playing tirelessly in numerous bands to cover his housing costs. Working as a freelance trumpet player in Los Angeles, it was at a nightly gig that Ryan Merchant and Sebu Simonian of Capital Cities took notice of the young prodigy’s talents and brought him back to the studio for a jam session that solidified Ludwig’s placement as the band’s lead trumpet wizard.

“We all got along great and the vibe was good musically, and that led to a four year journey,” Ludwig explained. “But playing with them really inspired me and helped craft the artist that I am today. It really showed me the power of the trumpet in pop music, and the way that they allowed me to play with so much musical freedom and also with so much stage freedom as a performer, really allowed me to grow into myself as a trumpet player.”

The power of the trumpet would be reoccurring throughout Ludwig’s career–and the singularity that he embodies is as much a product of his own skillful lip buzzing and finger-jittering on his brass piece, as it is of the crowds he performs in front of. Even in the deepest vestiges of indie-pop’s most hallowed outfits, those that profess and demand authenticity in every form, it’s not uncommon for live instrumentals and backing vocals to be replaced with prerecorded audio brought forth with the push of a button. This is less a sinister abandonment of creative honesty than it is one of simple practicality–sometimes you just can’t fly out that full string section to perform at every show. It’s a luxury usually only afforded to larger groups who can shoulder the extra manpower because their core group is so large already, like Arcade Fire or Of Monsters and Men, while indie superstar acts like Florence and the Machine quite simply foot the bill for backing singers and a full brass section because they can. So when there is a live instrumental present, especially for an act that might not typically have one, the crowd aptly loses its shit.

When Ludwig steps out with his horn, whether it’s for “Safe and Sound,” Foster the People’s “Best Friend,” or St. Lucia’s “All Eyes On You,” the crowd knows it’s in for a treat; what they don’t know, is that on his horn Ludwig is a veritable madman. But the sheer insanity with which he blares out the instantly recognizable brass hooks of indie-pop anthems is only the half of it, and at the time Ludwig was still a budding musician trying to find himself.

“I think we are all a makeup of the experiences we’ve had so far in our lives, and I attribute my sound very much to the various bands that I’ve collaborated with. I’ve learned so much along the way in each of those bands and was able to try out things as a performer and as a trumpet player, and the things that I found people reacting positively to I sort of brought into my own project,” Ludwig said of what he gained in those early years. “I like to think what my performance brings is the culmination of the energy that I drew from and gathered when I was onstage with Capital Cities and Foster the People, Fitz and the Tantrums, and St Lucia, all of that really inspired me and helped me to make the music that I make with the sound that I have. It helped me to gain the confidence that I have as a performer.”

Ludwig weighs in heavy and emphasizes on the inspiration that he drew from being around these monumental acts, and he’s breathless with appreciation. From Capital Cities especially, with which he spent the most time with and was an official member for a period, Ludwig learned the power not just of the trumpet, but of great synths and drums as well. It would take two years into touring with Capital Cities in 2014 for him to finally begin pushing the envelope in his solo career. 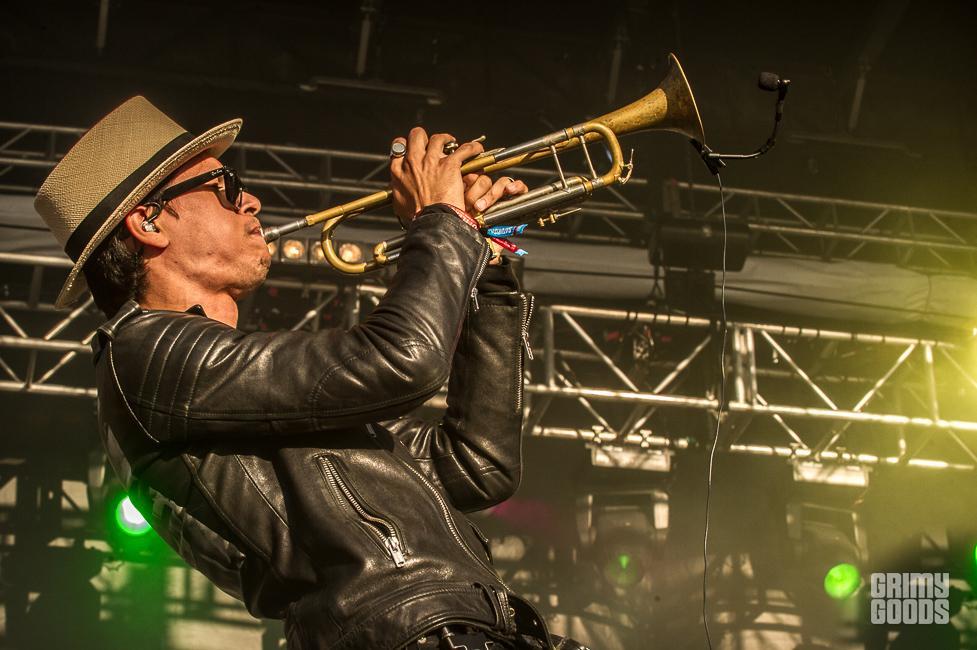 “I didn’t find my voice as a singer/songwriter until I started pursuing my project. That’s something I had to do on my own, just really analyzing my stuff and listening to it over and over and over and over again, thousands of times, and comparing it at times to what’s out there and really seeing if I was contributing something different. Because I didn’t want it to sound like anything particular, although I did want  it to have obvious references as far as what my sound is inspired by.”

That journey of course began long before his discovery by Merchant and Simonian, back to when he picked up the saxophone for the first time–an instrument a fourteen year old Ludwig thought was the “dopest” thing around. Growing up in household with parents who were raised in the era of disco, there was never a shortage of Michael Jackson, Earth Wind and Fire, or Marvin Gaye running through his house, and this invigorated Ludwig in his musical appetite. But everything really came together the moment he made a risky but destiny-laden decision to do his Cal Arts audition with a trumpet–an instrument he’d never played before. Ludwig had already given up saxophone for french horn after a music counselor made the suggestion, as there were no chairs open for sax; faced with the prospect of spending his college years playing an instrument he never really loved, the move to trumpet was the only logical one for him. With his trumpet in hand, Ludwig began expressing himself not only through the music program he was engaged in while going to college, but also through the genres of music he was encountering outside of it.

“The trumpet has always been the core of my sound. I was inspired to pick up the trumpet my last year of high school when I was introduced to Miles Davis. But before that I was into rock, I was into classic rock, I was into indie rock, and I was into Mars Volta… but being a music student I was studying and being fed the people that made jazz great and classical great. I was really in love with Debbie C in high school, I’d discovered Bjork at that time–and then it all kind of expanded, Radiohead came into my life,” Ludwig said of his influences.

“The trumpet was this instrument I was using to express myself within a music program but then I was also finding ways to express myself with it in other genres of music. So that when you get together with people and you jam, something weird happens because all the sounds that you and your friends were inspired by kind of start to create something new. Growing up in LA I was in a community with lots of musical people and we jammed all the time, and we created many, many bands, within bands, using the same people, changing band names. Also in LA hip hop was a huge influence on my life, from the classics to the current, and the whole wave of trip hop and electronic beat scene.”

By the time he started writing his own music he’d already been fed all the amazing influences he’d come across throughout his life, and on top of that, he was now a professional musician who had just finished touring with Capital Cities and Foster the People. He’d spent years at a time within the festival circuit, playing festivals multiple times a month over the years, completely inundated within the menagerie of music he was surrounded by. When it finally came time to write his own music, Ludwig took bits and pieces of all the different artists and genres that he loved–his only rule being: “If it feels good, it is good.”

Ludwig’s work in the studio is only half the battle, however, and he sees the singles he’s released thus far simply as “invitations” to his live shows–that’s where the real magic happens. He describes them as the most important and exciting part of making music to him, every song is wildly different and the only common threads are his voice, trumpet, and the dancing sensation they give off. It’s all about high energy and heavy improvisation; Ludwig’s goal is to affix you so completely under his spell, that your ability to deny him your body from dancing should be completely eradicated.

“I want to see people dancing, I want to see people singing the words by the second, third chorus. I purposefully was trying to make something that was easily relatable, easily digestible and just gets you feeling good and inspired to move your body,” Ludwig explained. “I borrowing tempos from genres and songs that had a history of always making move undeniably, within each song I wanted to create that undeniable aspect, that you can’t not move to certain feelings. That was a lot of the inspiration that went behind each song. Even specific movements and dances that I do when I’m listening to music, I brought those into the studio thinking, ‘I want a song that makes you move like this, or that.'”

For his bandmates, Ludwig pushes the concert experience to be as cathartic and moving for them, as it is for the crowd: “Another really important aspect of the live show is improvisation; although the trumpet solos on the record are modest, the trumpet solos and solo sections are extended in the live shows. We do this so that all of us can take the music to a new place and discover new things individually and as a group–because the most exciting part of playing music live is the unknown factor, so I like to extend those sections. I’m lucky to play with people who I’ve had relationships with for a very long time, having been instrumentalists in the scene for a long time, so I feel like I’m up there with family. So I always ask everyone to dig and to stretch within my music, in order to find their voice within it.”

Spencer Ludwig plays the Echoplex on Jan 10, tickets are still available here. For more info, visit his website and Facebook page. Take a listen to his most recent single “Diggy” below.