Mingling punkish vitality with enduring sentiments, Australian five-piece Gang of Youths left The Echo a smoldering heap in the aftermath of their set last Thursday. Ending an exhausting tour of the US with their sights on Europe for the final leg of their global trek, the band gave fans a rager to remember them by. Led by the ever outspoken David Le’aupepe, any Gang of Youths show is all unapologetic passion fueled by the bands guitar-drive anthems. The songs are written to be roared out in unison by the crowd while Le’aupepe and company swing their guitars in wild accentuation of their heavy riffs and hammer-one.

Opening with one of their new singles, “What Can I Do If the Fire Goes Out,” most of the night was dominated by their raw processions of angsty, existential tunes. With Le’aupepe casting his wild eyed look into the crowd and often stepping close to touch the heads and cheeks of fans, his mane of hair an illuminated halo of stage lights, fearless intimacy became thoroughly interwoven with arduous passion.

About halfway through the set Le’aupepe introduced three new songs which included a nine minute slow burner that showed off the bands instrumental chops, while giving brief explanations of their inception, as well as that of an older song, “Knuckles White Dry.” As Le’aupepe often explains to crowds, the latter song is a vivisection of his drives home with his ex from the cancer treatment center she’d visit–and who as of three months previous had passed away. Lyrically, and poetically, Le’aupepe’s songwriting is brutally gutting as is in its openness–transforming singularly personal experiences into unabashedly relatable moments. But when he speaks to the crowd, his narration of those moments are as affecting as the lyrics themselves and only accentuate the ways in which they bite, gnaw, and move your heart.

The thing is, for all the heavy topics that Gang of Youths deal in, hopelessness is never given a foothold. Howling along in defiance to, “Restraint & Release,” or with tired but unwavering conviction in “Poison Drum,” Le’aupepe and company take all the death, loss, horror, and existential weight of human existence in stride. “But I’m not afraid/No I’m not/I’m terrified,” Le’aupepe screams to us, and although it’s an inexplicably true statement it comes with an asterisk. You can be, should be even, terrified–just don’t ever give in.

Le’aupepe trades the soapbox for a stage and his words of urgency are stammered out in sincerity. Quoting Bukowski and emphasizing the sentiments behind song, “Atlas Drowned,” with a quip about Ayn Rand being a shitty writer anyways, Le’aupepe puts a fire in your belly in the unsure but passionate way he talks about his music. “I’m just exercising my right to be insecure about these songs not being good,” was the reason he gave for his monologues, but at no point did he sound preachy, political, or self-righteous. Le’aupepe is as unsure of himself as the rest of us, and there’s a comfort in sharing that with someone as loquacious as him.

As he shook his hips and ass, waving his arms, and even doing a little snippet of Beyoncé’s, “Single Ladies,” dance during, “Magnolia,” all the angst of the night seemed to melt into the sings upbeat rhythms. Jumping into the crowd and dancing with fans, Le’aupepe refused to let there be any barrier between him and the people around him as he wrapped his arms around people’s necks and tossed his body against there’s.

The Soft White Sixties rocked the boat with their eclectic catalog of sounds as the night’s opener. Lead singer Octavio Genera is a fireball of groovy emotions, traversing a steep collection of synth-driven ditties and guitar-burning rollickers. One minute he’s shaking his tambourine to a delirious riff and the next he’s sliding and spinning to manic percussion drives. Sweating everything they had and leaving the roo saturated with their giddy energies, The Soft White Sixties matched the ardor of Gang of Youths and made it clear they need to make a headlining return for themselves in the process.

The Soft White Sixties at the Echo by Steven Ward

More Photos of Gang of Youths wth Soft White Sixties at The Echo! 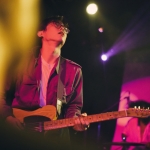 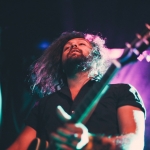 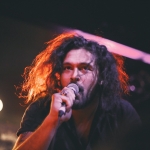 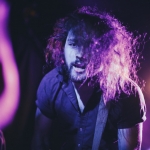 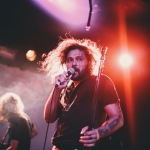 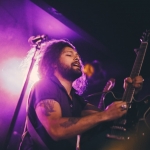 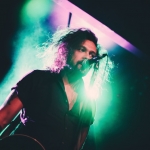 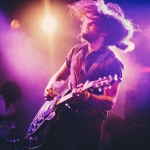 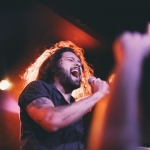 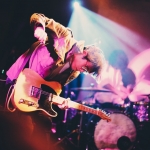 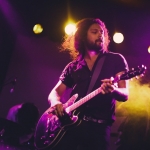 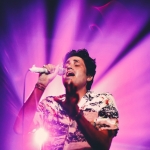 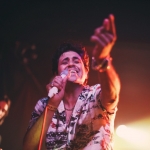 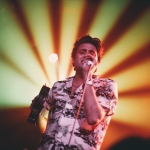