The house was full for the 15th anniversary of the Yeah Yeah Yeahs’ seminal album Fever To Tell (it enters its 15th anniversary in 2018). Judging by the mature age group, it was easy to see that the Fonda was made up of longtime Yeah Yeah Yeahs fans. In addition to fans from all over So Cal (some even from nearby states), a lot of of our favorite musicians were in the house as well. Romy from the XX, Matt Maust of the Cold War Kids’ — even Eric Wareheim and Seth Green weren’t going to miss out on this special one-off Yeah Yeah Yeahs gig.

Ahead of the show we were treated to a nostalgic photography exhibit where photos taken by guitarist, Nick Zinner revealed some intimate moments from the band’s 17-year career. From the Yeah Yeah Yeahs early press photo when they were just babes, to a couch-sleeping Karen O surrounded by little girls — Zinner’s photography exhibit was a welcoming look into the world of the Yeah Yeah Yeahs.

Before rolling into a sweaty 17-song set, we were all treated to a screening of ‘There Is No Modern Romance,’ a Yeah Yeah Yeahs tour documentary featuring 26 minutes of unreleased, unseen behind-the-scenes video of the band on their 2003 UK tour. It was an even deeper look into the incredible indie rock / punk journey of the Yeah Yeah Yeahs (along with a hilarious cameo by Har Mar Superstar). Despite many fans watching the final stretch of the Dogers’ game via their iPhones, most of us were fully engaged by the film. It was the perfect primer for the epic dance party that ensued after the film.

Opening up with “Modern Romance,” the Yeah Yeah Yeahs immediately ripped into the hypnotic electro beats of “Rich.” I was ecstatic. And mind you, I just had a baby. Despite growing engorged by the time the Yeah Yeah Yeahs hit the stage, I wasn’t about to miss any second of their set. Even if it meant walking out of the venue with leaky boob stains. So long as I didn’t end up like Rose Byrne’s character in ‘The Neighbors’, I was all good.

The room got real hot, real quick. Even the front of house where we were standing by the sound board became a hot box. Beer glistened the floors, while fans (including my husband and I) sang our hearts out to songs like “Black Tongue,” “Zero,” “Sacrilege” and many more favorites. Even my husband was fan-boying out back to his nerdy college kid days. Soon as “Pin” took its play, he sang along, banging his fluffy head of hair like an excited ‘gold lion.’

Karen O was without a doubt taking us on a trip through memory lane. With many of the Yeah Yeah Yeahs’ definitive catalog etching a memory in our lives, moments of love, loss and heartbreak festered deep. “Cheated Hearts” brought painful memories of a failed long distance relationship from NY to LA, while the heartwarming “Maps” — the iconic song that brought the Yeah Yeah Yeahs into the proverbial indie limelight — had me tearing up like an awkward school girl that just got her heart split in two. Only my tears weren’t tears of sadness, they were tears of joy. I don’t know if it’s because I’m postpartum and my newfound mommy hormones were taking over, or if it was the beer buzz combined with my magical milk boobs — but my heart was swelling with love. As Karen sweetly shouted before playing the song:

I’ve experienced love and loss, but for me now, “Maps” represents life and love. Nobody can ever love my baby girl and my husband the way I love them. So yeah, “Maps” had me ugly-crying in pure loved-up bliss. I’m sure all the beer consumed didn’t help holding back those tears either.

Along with her fierce stage antics that involve mouthing a mic and lassoing it above her head, as though she were a snake charmer, Karen O also shone with her signature style. When you go to a Yeah Yeah Yeahs show, you’re being treated to more than just incredible music. The visuals are always something to look forward to. I’m talking about Karen O’s dope fits. Designed by Christian Joy, Karen O’s outfits are a part of the Yeah Yeah Yeahs’ shows that always deliver excitement and surprise. From her pants that read “Scream” and Shake,” to that badass ‘Black Tongue’ jacket — Karen O was looking magnificent.

The eye candy didn’t end there, Yeah Yeah Yeahs’ had a fresh stage set up. Their piercing rays of light shot out from the stage to the beat of the music. With each beam, we were injected with even more infectious energy. And how about all the celebratory confetti streams falling from the sky? Or that massive eye ball (beach ball) bouncing across the crowd from stage left to stage right. Hands down, Yeah Yeah Yeahs were and are always, a spicy visual and aural treat.

Wrapping up their performance, the Yeah Yeah Yeahs closed up with the euphoric “Y Control” and the raucous “Tick.” While a rather big dude who’s head resembled that of Grandpa Simpson, pummeled his way back into the crowd for his 3rd or 4th time (dude was quite the drinker and upsetting people with his constant trips to the bar), I was tired of being pushed around and threatened to squirt him in the face with my breastmilk. Let’s just say he never crossed my path again. I then got lost with my husband in the chilling beauty that is “Y Control” (my husband’s favorite Yeah Yeah Yeahs song). There’s just something about Nick Zinner’s distinct tremolo picking. It’s riveting, it’s sad, it’s beautiful, and it just intensifies all the feels. It makes the song.

As we all came down from the euphoria of “Y Control,” I was in a happy daze. Cozy and comfortable in my sweat bubble (and feverishly hotter than ever as my boobs were now fully engorged), I then had to deal with some lame shit. Two high-heeled girls making their way from the pit to the soundboard (where it was a bit more breathable), decided to squeeze into the tiny space in front of me as they yapped about how damn hot it was. Ugh. I figured I’d just suck it up and deal with it, but as soon as the manic sounds of “Tick” came on I knew the Yeah Yeah Yeahs were going out with a bang, and so was I. Not sure what took over me (or where the burst of energy came from considering I was on four hours of new mommy sleep), but the old punk in me surfaced and I started bouncing across the floor, holding my boobs in place and just wildin’ the fuck out. It was exhilarating; a cathartic stress release. And to top it all off, the Olsen Twins (look-a-likes) couldn’t handle the slam dancing. They exited within seconds of my blissful thrashing.

As the Fonda Theatre curtains began to fall, we made our way back to our cars with smiles on our shimmering faces. We were fully satiated. By this hour my boobs were now leaking, and I couldn’t race to the car quick enough to express some relief (damn, this thing is handy). I may have suffered some temporary engorgment ‘fever to tell’ and embarrassing breastmilk stains, but it was totally worth it. 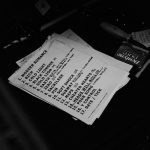 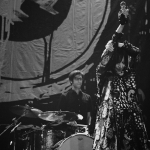 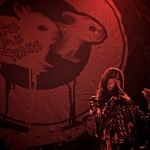 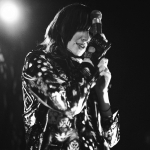 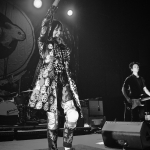 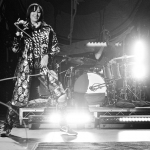 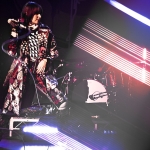 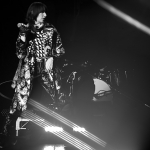 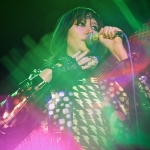 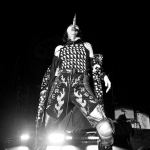 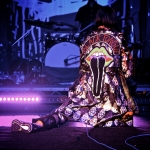 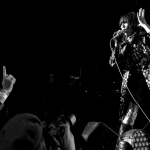 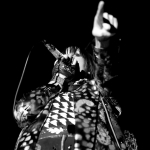 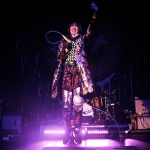 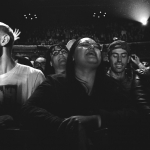 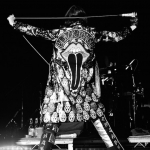 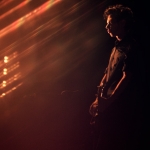