While catching your favorite band at a live concert can be an incredible experience, it can also (unfortunately) become an annoying and uncomfortable experience due to the fact that some people just have no concert etiquette.

I’ve had it all happen to me at show: I’ve had beer spilled on me, I’ve been painfully stepped on (with a heel), I’ve been thrown up on (yes, that really happened, not once, but twice) and I’ve even gotten into a scuffle or two. If you’re an avid show-goer and have been attending concerts for many years, at least a handful of these things have happened to you. It just comes with the territory of hitting shows multiple times a week.

A concert should be a moving and blissful experience, but sometimes you just want to punch that chatty Cathy in the throat or tell the girl next to you with her massive purse to check in her bag or leave it at home. While some people say you should just ignore these outside annoyances or move to another spot, it’s not always that convenient and easy to do. With that said, a little concert etiquette can go a long way.

For all the selfish jerks out there ruining concert experiences across the globe, take heed:

1. Incessant Talking — Not only is it totally disrespectful to the artist/band performing on stage right before your eyes, but it’s absolutely annoying and rude to those around you. Save the conversation for a quiet dinner, the rest of us are trying to enjoy the performance and not hear about who yet met on Tinder. In the words of Run DMC, “you talk too much, you never shut up.”

2. Grinders — We’re not talking about the dating app here, we’re talking about people that purposely rub up on those in front of them. In most cases it’s men getting way too close to women. Yes, we’re aware that concerts can be a very tight squeeze; however, there are a lot of creeps that do this on purpose. When there is plenty of room around you and some sweaty dude is bumpin’ his uglies on your booty, that is just to cool.

3. Demanding “Personal Space” — On the contrary to #2, people who demand personal space at a concert are just as lame as the grinders. Sure, it’s okay to not want to have someone breathe their halitosis down your neck (if the concert allows for the room); however, it’s not okay to take up a radius of space where at least five more people can comfortably squeeze into. I recently had an awful experience with two females that were bullying anyone that tried to get in on the ample space around them. I most certainly did not put up with their bull shit. It’s an asinine concept to go to a concert and be offended that people are crowding you. If you want “personal space,” go pay for VIP or premium seating. 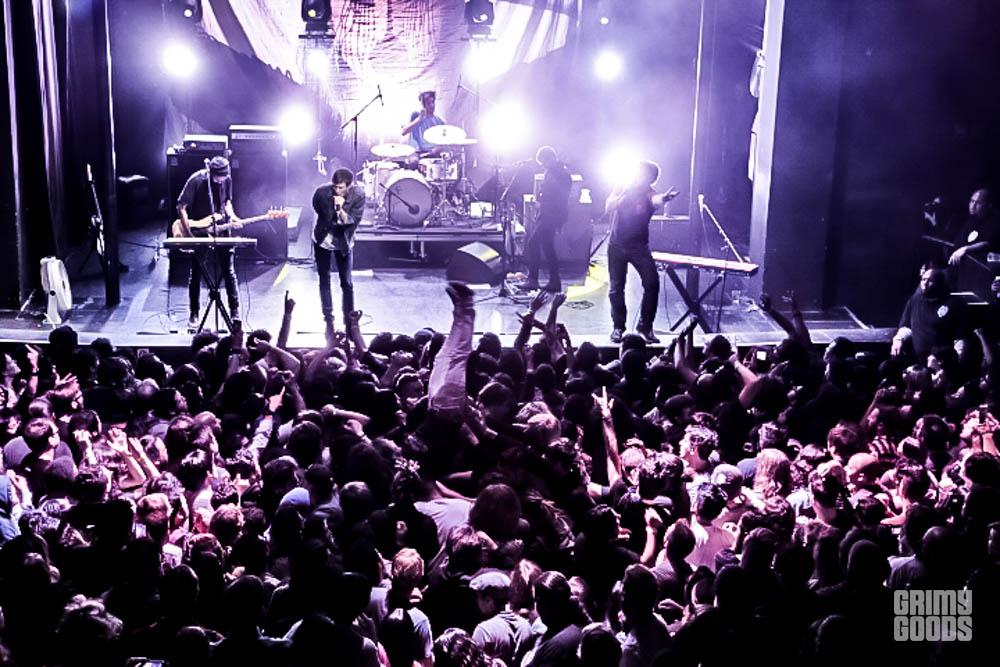 4. Large Brimmed Hats — We get it. You want to be fashionable and trendy, but wearing a large brimmed hat to a concert is just silly. Don’t get me wrong, some hats are okay, but if your hat takes up more space than your body, it’s totally not okay. Not only are people bumping into your hat, but you’re blocking the views of so many people. Leave the “big ass Stevie Nicks gypsy hat” for when you’re trying to block the sun, and not a fellow concert-goer.

5. Amateur Videographer / Photographer — Please, please, please — put your damn phone down and enjoy the LIVE show experience. I understand that you want to snap a few photos, and that’s totally fine. Or maybe you want to Instagram a 15-second video clip of your favorite song — right on, go for it. But by no means is it alright for you to have your intrusive phone up in the air recording entire songs or taking dozens of photos just for that near perfect Instagram photo. Even artists hate when you pull that shit. You want to shoot a lot of photos, get approved for a photo pass and join the rest of the photographers in the photo pit for three songs.

And if you’re going to take a photo with your phone, TURN OFF YOUR FLASH.

Oh, and don’t be that dork shooting with a big ass iPad. Ain’t nobody got time for that.

6. Rude Photographers — Speaking of “photographers,” there can be jerks in the photo pit too. Yes, Grimy Goods is a music blog and we have a vast and very talented team of photographers all up in the front lines and pits covering shows. And yeah, it can be annoying. But that’s why there is usually a three-song photo rule. Take your photos and then move to the back. Don’t camp out in the photo pit or front row for the entire set. AND if you’re a concert-goer in the front row, don’t be a dick to the photographer. Chances are they’ll be done after three songs. With smaller venue where there is no photo pit (The Echo, The Troubadour, etc), the photographer may shoot more than just three songs, but by no means should they be taking up prime real estate and snapping away for the duration of the entire night.

7. The Tall Guy — If you are a tall fellow (or gal) it’s totally not okay to slam your way to the front lines and prop yourself directly in front of people that are a bit more vertically challenged than you. Conversely, if the tall person has been posted up for some time and a shorter person arrives later and asks the tall person to move, that is lame. If you can’t see and the person in front of you has been there much longer than you have, you need to move. However, there is nothing wrong with asking someone to move up or back a little—regardless of how long they have been there—if they are rudely taking up open space (see #3).

9. Crop-dusters — For some reason, I’m always getting crop-dusted at shows. I don’t know why, but I feel like I’m a fart magnet. My brothers farted on me when I was kid, like, all the time. In Jr. High, my guy friend once farted on my head when I was bending over to pick up something. And now I seem to get crop-dusted at shows at least once a month. If you can cut an inert fart, then have at it. But if your farts stink something deadly, please go to the bathroom and let them rip. Getting caught in a thick stench with nowhere to run is not fun. 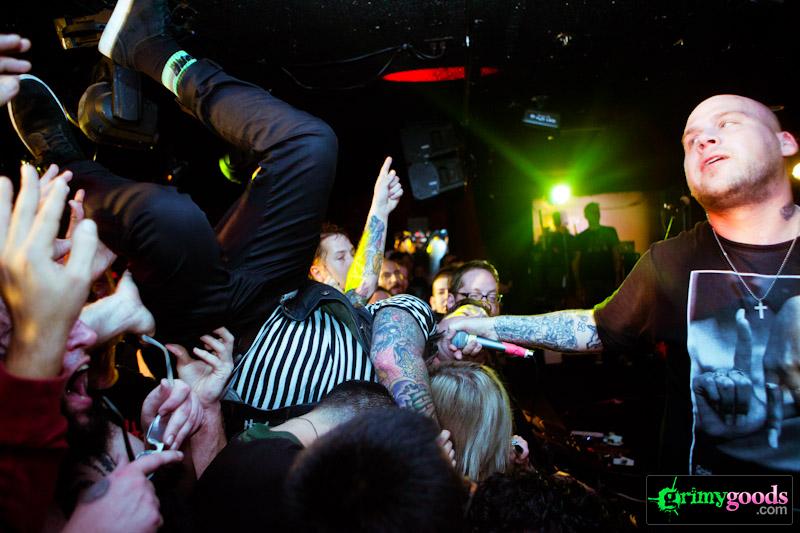 10. Stage Diving / Crowd-surfing / Moshing — While crowdsourcing via our Facebook page to find out what annoys people at shows, I was surprised to see how many of our readers hated moshing and crowd-surfing. For me, this is a touchy one. Crowd-surfing, stage diving and moshing remind me of my youth and the many punks shows I kicked off my concert-going life with. But when it’s not a punk show where that kind of behavior is welcomed, it can get really annoying. Especially when the show you’re at is chill stoney music (The Growlers, Mac DeMarco) and kids just keep getting crazy as though they were at an early Minor Threat gig. If even the artist/band is getting annoyed by all the stage diving and crowd-surfing, you really need to tone it down and let them do their thing. Now, if it’s a band like Los Crudos, Dawn of Humans, The Bronx, Dillinger Escape Plan, Trash Talk, etc. — then by all means, mosh and surf away!

FYI: Don’t mosh to this.

11.Being Rude to Opening Bands — I don’t care how awful the opening act is, you should not make them feel bad. Chanting for the headliner, heckling, throwing things — none of those are acceptable. Watch, wait and clap. At least they’re out there trying.

12. The Cool Kid — This person is just too cool to show any emotion at concerts. They don’t move around, let alone dance. They have resting bitch face. They look constipated. They don’t cheer. They don’t clap. They just stand there. And sometimes they fall asleep (I’ve seen this numerous times). I’m not saying everyone has to be moving and grooving, but show some sign of appreciation for the artist performing right before your eyes.

While this concert etiquette list is by no means a set of rules you must follow, they are a list of things that annoy the majority of people at shows. In the end, we all want to have an incredible show experience, so pass it on.

UPDATE (2018) — Every now and then, some jerk will ruin your concert experience. Sometimes you can avoid it, sometimes you can’t. Last night at Cage The Elephant’s show at the Shrine Auditorium, that jerk came in the form of a woman that was obsessed with videoing and photographing just about every song. I’ve never in my 21 years of attending concerts ever seen anyone this trigger-happy. We pretty much watched the entire show through the lens of her phone. Incessant sharing culture disgusts me (you can read my rant here). With that said, I think we need to share our Concert Etiquette feature once again. Lady, if you’re reading this post, I hope you learn a thing or two.

UPDATE (August 5, 2015) — Last week we felt the need to update our 2011 post: “Concert Etiquette – “13 Lame Things You Should NOT Do at a Show” and thanks to the insight of many of you, we now have an updated list that will hopefully be read by people who need a little concert etiquette in their lives. Big thanks to our Facebook and Twitter followers who gave us their hilarious and honest feedback

What annoys you at shows?

“6 ft 8 Herman Munster looking dudes who stand in the front of the stage and hold their phones high in front of them to shoot video, with their elbows sticking out. People who talk the whole time, but really, they’re trying to yell over the band. Drunk people who insist on pushing through the crowd with full beers and end up spilling the whole thing on my feet. That one person with the frizziest Chaka Khan hair who stands right in front of me at every single show. Girls with pointy leather tote bags who stand in front of me and stab my boobs. There’s always one farting vegan hipster who will just stand there and wallow in his own stench instead of moving away from the crowd… not a care in the world. Oh yeah, and people who think taking photos of the band with an iPad is a good idea.”
~ Sharlynn V

“+1 on no tablet pics/vids. Phones were bad enough, but now have people who insist on bringing their desktop monitor-sized tablets and hold them up right in your line of sight.”
~ John H

“Butt heads who decide they want to start a mosh pit. They don’t give a damn about anyone else around them, they are the most selfish, annoying jerks. Moshing is so incredibly uncool & is a pathetic joke. I like to hope one of these losers bumps me so I have an excuse to kick them as hard as I can. I have strong, powerful, long legs.”
~ Nikki K