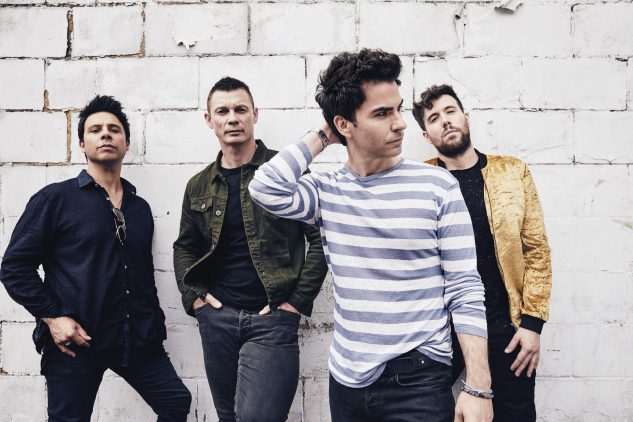 In their over two decades run as a band, Welsh rockers Stereophonics have nurtured a commercially successful project that’s established a massive worldwide fan base, released ten albums, and created a catalog of music filled to the brim with hits. With the release a few weeks ago of their tenth studio album Scream Above the Sounds, the band’s milestones continue to grow but they refuse to spend too much time focusing on any one thing that’s already in the past, preferring instead to look ahead at what’s to come. Speaking with lead-singer and guitarist Kelly Jones, he explained that since their beginnings Stereophonics never wanted to be a band that spent its decade-spanning career together reminiscing about that one hit song they wrote decades ago.

“The main thing is there’s a lot of bands that say they’ve been together twenty-years but they’re still talking about one album–something we never wanted to do was talk about some seminal album from the nineties. Thankfully through hard work, a great following, and picking up new fans along the way we’ve got some big songs on every record over twenty-years,” Jones said. “So it’s always been about moving forward and the songs have always been the boss of our band, and I think that’s what kept us together and excited to still want to hang out with each other. We never wanted to be this band that talked about what they did two decades ago, it’s always about going forward and looking out at a crowd of new people who’ve never heard the band before and just love the new record or they just discovered a song of ours.”

That new record has already made its impact with fans new and old, with singles like “All In One Night” and “Before Anyone Knew Our Name” resonating with its melodically raw approach to no-frills rock. Born out of a varying source of influences and tastes, the critical change that came with recording Scream Above the Sounds, as well as their previous two albums, was the procurement of their studio space to record. A move that removed the time-constraints and tensions that had previously existed in their recording process, freeing them up to just create music.

“It was the first time the band had its own studio, so it’s kind of been a freeing process really. The seven albums prior to that we had to book studio time and cram it between tours, you’re always stuck within a time frame,” Jones explained. “But on these records, I’ve kind of just been going into the studio making songs and I haven’t been considering where they will fit or what styles of music will go with the others. So as a songwriter it’s been really nice just making music all day and then figuring out later how to compile them into an album.”

A quick look at Stereophonics large discography reveals a devoted consistency to releasing an album every two years, which repeats throughout their career with exception of the four-year break between their seventh and eighth albums. According to Jones, it just naturally fell that way for the band as they finished up the tour for their first album and felt the itch to record something new–before they knew it they were touring for that second album and on the cycle went. Yet the real achievement has always been that given such ambitious pushes despite time constraints and touring, Stereophonics has never really compromised its devotion to their music for quick releases.

“That kind of happened for twenty years,” Jones says with a laugh. “Each album I make I try to write from an honest place. This record was a lot of different feelings from stuff like childhood to adulthood, memories, feelings, and expectations and a lot of the anxiety in the air right now across the world and I try to come out very celebratory in not forgetting the small things in life.”

Touring around the world for two decades and now doing it again this month, Jones has seen and heard a lot of those anxieties. Inside and outside the venues they’ll be playing in the U.S. and Europe over the next seven months there’s an embroiling of all kinds of division culturally and politically. For bands embarking on tours that take them potentially to different parts of the world, there’s a lot to consider in terms of where to play and where not to.

“I think the world is experiencing many similar things in many different countries. I think young people are not sensing a feeling of leadership and I think they’re getting confused and not really sure about what they should be doing about it all. You can tell with every leadership there’s a lot of ego and power as opposed to trying to do what they can for the people who are voting for us,” Jones said of the turmoil and how it affects the band. “It’s very disconcerting because you don’t really believe anybody, you don’t believe anyone is telling the truth about anything. So before when we used to come to the states we’d just get in a bus and tour the country, but now it’s a much more targeted prong approach as we try to build up that momentum again as a band.”

With only two dates in the states and both of those on the west coast, there’s a small window for fans to catch the band’s return but one well worth the attempt. For Jones, the joys of their large catalog of music are that their live shows don’t hinge on any one song, so the setlist is huge and filled to the brim with favorites with equally hefty emotive value picked from the over a hundred songs they have to choose from. Los Angeles even holds a special place in the frontman’s heart (probably), as when he thinks of the city it reminds of beloved Grammy Award-winning singer/songwriter Seal.

“When I think of L.A. we recorded our fourth album there and we lived in a house in the Bird Streets and when we were there Seal was staying there. And one of the memories that sticks is of Seal asking me to go jogging with him,” Jones said. “Now Seal is about six-feet-fucking-nine and I’m fucking five-foot-six and I just have this memory of like one of his steps being about five of mine. It was the first time I’d lived in a house in L.A. as opposed to some hotel on the strip where I suppose everyone’s gotten lost at some point in their life.”

Everyone gets at least one humorous or strange Los Angeles anecdote in their lives, and it appears Welsh bands in town to record an album are no exception.

Stereophonics will be making a stop in Los Angeles to play The Mayan on November 30. Their tenth studio album Scream Above the Sounds is out now via Stylus Records. Visit the band’s website and Facebook to stay updated on future releases and tour announcements.