The most obvious difference between the first and second day of Outside Lands was just how spread out the acts were on the latter. The festival prices itself on not having any time conflicts but Saturday saw breaks between sets that actually allowed fans to explore some of the event’s other offerings. Whether it was checking out the killer comedy acts at The Barbary or seeing what star or musician was cooking away on the GastroMagic stage, there really was an endless variety of things to fill your time with. And with some wine in hand from the titular Wine Lands or a bacon-infused concoction from Bacon Land, you were free to roam and still listen to the music echoing through the trees to soundtrack your stroll through the park.

Day two saw a number of the weekend’s most anticipated acts and with Florence and the Machine set to close out the night, the electricity in the air from the moment the gates opened was tangible. Once again though the earlier acts managed to shine just as much as the headliners, with SoCal native Cuco doing it up big with his band. With the Sutro and a canopy of trees around him, Cuco channeled all the dreaminess he could muster from his slow-burning love songs. Definitely one to continue to watch, the young singer already has a dedicated following that seemingly caravanned up from his hometown just to see him as his crowd was not only massive but caught completely under his spell.

But Cuco wasn’t the only soft-voiced sweetheart to sweep the Outside Lands crowd off its feet, as Daniel Caesar had his own moment on the Twin Peaks stage not longer after. To Caesar’s credit, not only is he an astounding vocalist with a knack for bringing to life a rapturous R&B sound, but he’s also one keeping alive such things with a younger generation. There’s nothing really modern about Caesar’s approach and his no-frills production puts the focus on his cutting croons and slick grooves—which is exactly where it should be.

Chvrches at Outside Lands day one by Steven Ward

At the Land’s End stage synth-pop powerhouse Chvrches launched into a set that they treated as a headlining slot. Led by the small in stature, but big in vocal prowess Lauren Mayberry, it can never be said that the band put on a dull show. Even if you weren’t a fan and happened to be strolling by, you’d be hard pressed to not be even slightly taken aback by the sheer dynamo of passion that is Chvrches. Mayberry is hurricane of shrill howls and soaring cries, her voice taking on an almost ethereal clarity as it rings from the dozens of speakers around her. A band created for arena shows and festival appearances, Chvrches has no problem filling the time slot before Florence Welch’s performance—and they did so with a shimmering gusto.

As the evening drifted closer the crowds grew exponential, with much of splitting either to snag a spot for Florence’s set or to party with one-third of The xx’s lineup, Jaime xx. One of the few DJs present who lived up to the hype, Jaime brings all his veteran experience as The xx’s producer and injects his shoes with something dutifully sublime. With his own record out which functions as the backbone of his sets, he also isn’t afraid to drift a bit and improvise depending on what the crowd is feeling. Like a true puppet master, Jaime had his crowd under his complete control as he spun record after record beneath the huge disco ball that glittered above him.

In the purest form of grace and beauty Florence and the Machine descended on Outside Lands just as the sun had faded behind the trees. Coated in red hues and glistening white, Welch was the picturesque embodiment of otherworldliness that lives and breathes in her music. Barefoot and wild, the young singer/songwriter spent the entirety of her set attempting to bridge the gaps between herself and the crowd that had gathered around her. Drawing from a discography that essentially combines the imagery of 18th century poets and Shakespearean allusions with the sentiments of baroque rock, Welch has always channeled something of old-soul wisdom despite her apparent youth. Like Stevie Knicks, Janis joplin and Patti Smith before her, Welch is not only a rock-star onstage, but also a living conduit of the energy she puts forth in her music.

There’s a genuine wonder to her existence onstage that seems to astound even her and she dance, sings, and caresses the crowd like an old friend. Her albums are chalk full of anthems and ballads that simultaneously sooth as they fill your soul with fire, and with her full band at her back there’s an almost divine nature to them that is hard to overcome. We’ve said it once and we will keep saying it: Welch is one of the most talented singer/songwriters and performers of her generation. Her authenticity is unmatched and not one second of her songs or performances ever feel trite. She engulfs you with her embrace and when she runs through the crowd barefoot howling to the tune of keys, trumpets, and harp strings touching the face of each person in the crowd—it’s impossible to deny.

Daniel Caesar at Outside Lands day one by Steven Ward

Cuco at Outside Lands day one by Steven Ward 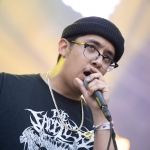 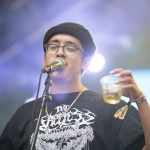 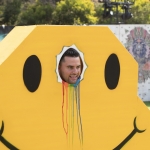 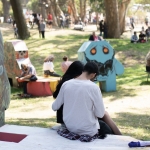 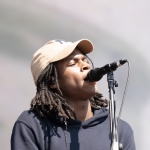 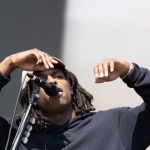 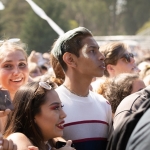 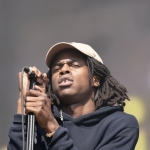 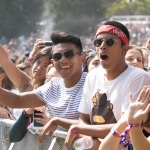 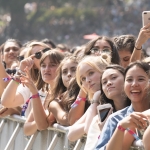 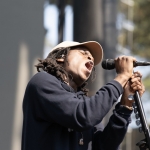 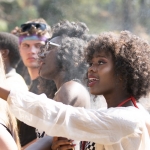 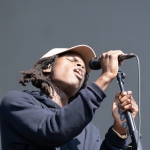 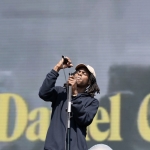 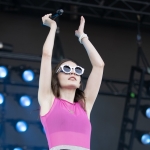 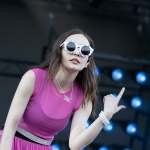 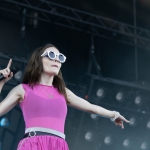 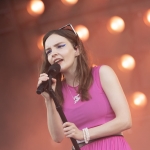 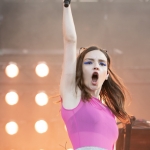 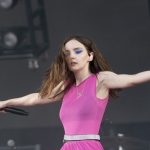