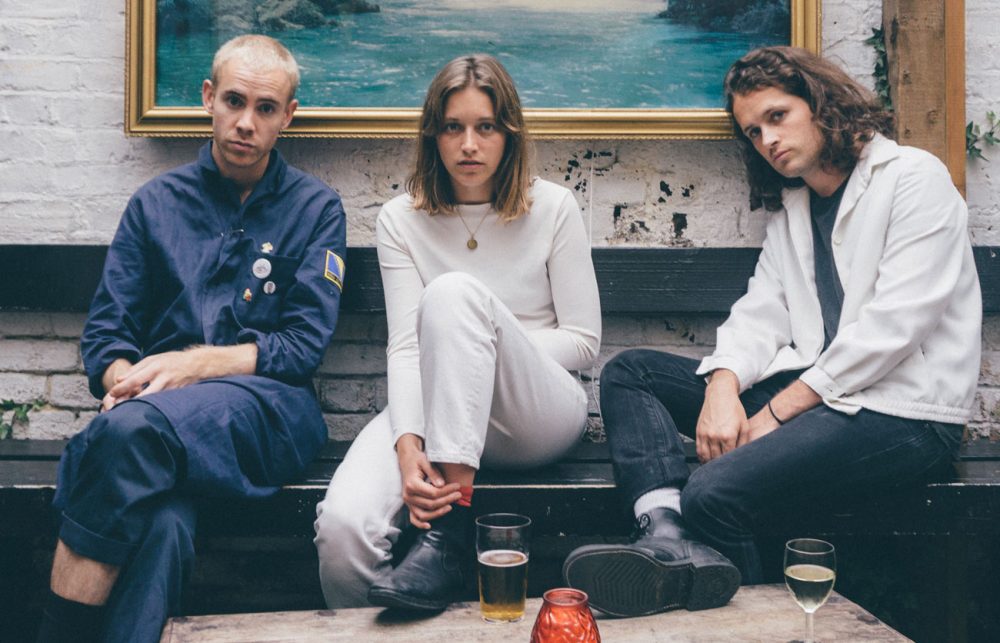 U.K.-based three-piece whenyoung have revealed the title track and accompanying music video for “Given Up” off their upcoming debut EP out November 9. Directed by Bunny Kinney and filmed in London’s Peckham Liberals Club, the video boils down to a bunch of sporadic cuts of different characters in various states of drunken bliss and angst at what is presumably a whenyoung show. The video is driven entirely on the potent and virulent guitar lines that whine over an enthusiastic tumble of drum-work, all of which is encompassed by vocalist/bassist Aoife Power’s warm croons. “Given Up” mingles a lot of what makes whenyoung so damn exciting to listen to; even with what little they have available to listen to right now, the trio has a clear knack for crafting incredibly authentic and honest rock pieces. Behind each of Power’s cutting howls, Niall Burns and Andrew Flood can be found dueling one another on guitar and drums respectively, offering up a set of sublime and invigorating textures and melodies.

“[“Given Up”] was written after a series of late nights and self-inflicted misdirection,” the band has said of the single. “The central message is to take your life by the reins and create your own future.”

After banding together in a meeting of cheap vodka and The Velvet Underground, the trio moved from their hometown of Limerick, Ireland to London last year and became whenyoung. With a string of festival appearances across Europe and a number of upcoming headlining shows, in addition to supporting the likes of The Vaccines, it’s pretty clear the band is rolling fast towards something spectacular. If any more proof of that is needed, look no further than their version of the often-covered Cranberries classic “Dreams.” Power’s slightly accented cries invoke a powerful reminiscence of Dolores O’Riordan and it’s quite the faithful tribute to the Cranberries, who also formed in Limerick in 1989. Another single, “Pretty Pure,” dives head-first into more sleek indie-pop sentiments, but once again Power’s piercing vocals, coupled with Burns’ and Flood’s excited playing, deliver some seriously exhilarating rock. With an entire EP on the way,

Watch whenyoung’s first single “Given Up” off their upcoming EP.

whenyoung is currently on a headlining tour of Europe and will be joining The Vaccines and Blossoms in support of their own tours this fall. No U.S. dates are scheduled just yet, but it’s only a matter of time before the band makes it stateside. Visit their website and Facebook to stay updated on future releases and tour announcements.

And here’s the amazing Cranberries’ cover