You’ve probably heard a lot about St. Vincent recently. Only a few weeks ago, she gave an intimate and surprisingly stripped back show at the Belasco Theater. That show turned out to be a preview for her new EP, MassEducation, comprised of piano renditions of her own material. On first glance, that’s quite a leap for one of the most notable contemporary guitarists, but she pulled it off like the rock star that she is.

This past Monday, Annie Clark was back in full form at the Palladium. She returned with her band—bassist Toko Yasuda, drummer Matt Johnson, and keyboardist Daniel Mintseris—for a spectacle that provided everything a longtime fan of St. Vincent would love, including music, color, and lights.

When the band walked out onto the darkened stage, they were helped up to individual thrones lined up in tandem across the stage, eliminating any chance that a player would be blocked by another. Clark came out a few moments later in lustrous orange spandex, clutching a matching orange guitar of her own design in her hand. As the quartet settled in, the stage was exploding with light from the panels upstage and from below—their thrones, it turned out, were mirrored inside and incorporated as part of the rest of the night’s light show.

Without any pre-show music or even an opening act to warm us up, St. Vincent’s entrance made that much more of an impact. The band burst out the gate with so much stimuli that the most detailed memory I have of it is just a cloud of strobe lights and noise. At first, it felt like most of her set was from her 2017 LP, Masseduction, complemented by pre-recorded clips in that album’s art style to use as background visuals.  “Los Ageless” was an early track in the set, paired with the image of Clark getting brutally punched in the face with a boxing glove.

Aside from that recent studio record, she pulled from all over her varied catalogue, hitting singles like “Cruel,” “Digital Witness,” and “Eye of the Tiger” from her record with David Byrne. LA crowds may not dance, but St. Vincent fans show their appreciation by singing just about every word back to her, with plenty of love shown for her acclaimed self-titled record. Clark poured her soul into her performance, never loosening the grip on her guitar until the very end. With just a mic, she climbed down from her mini-stage to stand closer to the crowd, riffing about LA to the tune of her single, “New York.” “So far in a few blocks…of traffic,” she mused, before launching into a piano rendition using the track’s original lyrics.

She maintained the acoustic energy going into the encore. After introducing her band, Yasuda and Johnson promptly left, giving Mintseris and Clark all the space they needed for a reverent “Happy Birthday Johnny.” When Mintseris disappeared, it left us with just Annie Clark, the ringleader of this massive affair. By the time she reached her final song, she had been onstage for well over 90 minutes—likely not her most intense performance ever, but still a long time to spend surrounded on all sides by light and sound. So we were more than willing to forgive her for forgetting the correct first verse to “Severed Crossed Fingers,” the night’s grand finale.

The next news from St. Vincent should explain what she and Bobcat Goldthwait are up to. Both that Belasco performance and Monday’s blowout at the Palladium were filmed, which could become a live concert movie, but even the Talking Heads classic Stop Making Sense only featured one recorded show. Something tells me that there will be more to Clark’s project than just a concert on film, but many questions remain. Was the acoustic EP always part of this scheme? Will she be recording her next show in New York at the Brooklyn Academy of Music? How will they cut this all together? Whatever it is, will it be ready by Christmas? I sure hope so—I have plenty of music lovers to buy for. 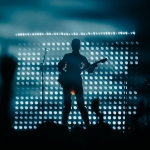 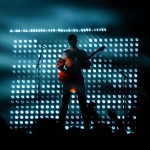 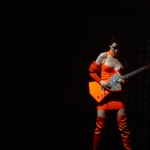 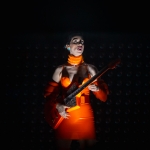 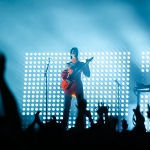 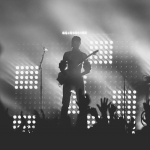 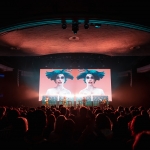 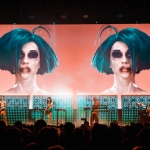 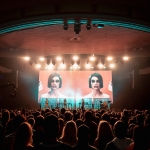 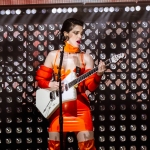 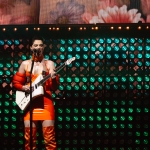 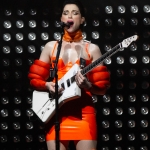 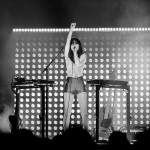 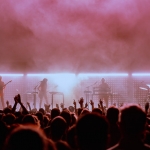 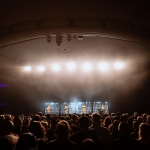 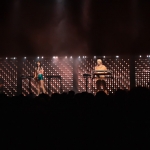 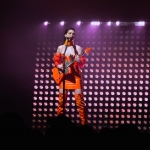 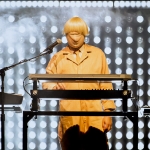 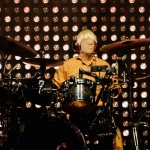 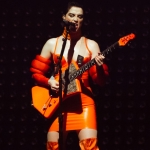