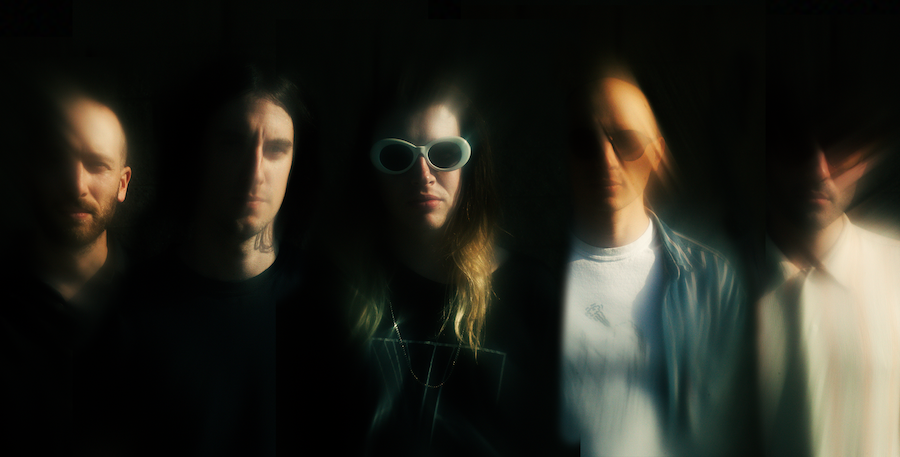 On the final leg of their first U.S. Tour, Ulrika Spacek rips up the stage at Desert Daze 2018. With their debut LP The Album Paranoia released in 2016 and their sophomore LP Modern English Decoration in 2017, the band has made quite a name for themselves in such a short time; from touring with Slowdive and Ride to performing on the BBC. Formed out of London’s DIY scene, Ulrika Spacek—comprised of Rhys Edwards (lead vocals/guitar), Rhys Williams (guitar), Joseph Stone (guitar/keyboard), Syd Kemp (bass), and Callum Brown (drums)—are what you would call a genre-defying rock band; and they have no intention of glazing themselves in a definition either. With their fuzz driven riffs, their neo-psychedelic spacey-ness, and affinity for visual art, listening to the band almost feels like an immersive experience. Since their inception, the band has worked hard to get to where they are now.

As we huddled around a splintery picnic bench at Desert Daze last month, we sat down with the band to talk their first tour in the US, the festival, and their growth as artists since they began.

How was your experience of playing for the first time in the US?

Rhys: Its a new place for us. Its quite exotic for us – its a whole new world. Desert Daze was the first contact we had with America. We weren’t able to do it in terms of money and then Phil [Pirrone] said he would book our tour. The whole tour was in connection with the festival. It was a great way to come to America.

Callum: It’s been a really positive reaction so far. The crowds have been really warm and it was nice to round up the west coast tour with Desert Daze. We were all really nervous before but we settled into it once we got on stage.

What has been your favorite aspect of the festival?

Rhys: The placement of us in terms of the billing — we’ve never had such a nice slot. In Europe, we usually play the bigger stages but early on when the sun is still out and we can’t use visuals. I think that’s what makes it so unique. Its a festival with such an amazing lineup and to be very much a part of it is amazing.

Rhys: We’re in good company at this festival. It feels like family and it’s nice to see familiar faces.

How do the bands you play with challenge you to keep evolving as musicians?

Rhys: When you tour, you naturally get to see live music. With every band, theres a least one thing you find endearing. You’e always learning—even if it means that you’re learning more about yourself. Sometimes, you learn what you dislike about things and that can be more important than anything.

Callum: It’s good to keep your head down a bit and focus on your own self. You have to get your head in the right space.

How did you guys decide that this variation of the band is what you wanted to stick with? How do you challenge each other with your ideas?

Rhys: When the music sounded interesting to us, it felt like it was something. You never need to discuss those things. A lot of it comes down to musical taste. If your tastes align, you don’t need to say anything.

Rhys: But we write music a lot like reflecting each other. One of us will right a part and someone will write something in response. That’s kind of how we communicate.

On their local scene in London:

Callum: I’m also a promoter so I’ve been doing it for about 7 years. It’s about supporting the local scene—stuff I like and see that has potential. It’s important to encourage new music. Whether its something you’re massively into or not, just give it a chance. You just don’t know the outcome.

Rhys: When we started, we put our own night on. We invited friends to play and had exhibitions. I feel like the best way to contribute to things is just to start something. It was a bit scary because you have to hope that people will come. But if you believe that you’re offering something a bit different, they will.

Syd: I see a lot of people coming to London not only for working in my studio, but for the excitement of the scene thats in London that people want to witness in a way. It’s really great to see that. I see so many bands coming all from Europe just coming to see the London scene.

Do you find that theres a struggle with individuality with the band?

Callum: Putting ego aside is a way of serving the soul—it is a struggle going back and forth with yourself. Like thinking “What am I doing?” or “Is this good enough?” or “Should I put my stamp on a song?” You just have to trust the others.

Syd: It’s not knowing your place but knowing what other people can bring at the right time. In that way, you don’t really think about yourself. You can’t wait to see what the other will bring.

Rhys: Other people shape what you play. They pull you in a slightly different direction that you normally wouldn’t.

Joe: I think we’ve figured out recently on our latest album that having our own time to record some parts —like trusting the others and having faith in their taste—has been helpful. It’s that level of trust that is really encouraging and you feel like you’re able to experiment while they’ve got your back. But also, learning how to say “I don’t think this works” is good too.

Rhys: I don’t think we feel bound by this thing that everyone has to fill every song.

Joe: It’s fun swapping around instruments on the record — like if someone has a special moment moment. Its nice not to be locked into a part. There are lots of things we’d like to incorporate and obviously, we’re not masters of every instrument so it’s kind of working our way through it and thinking about who would be the best for each part.

As you start bigger tours and having more demands as artists – how do you get into those special moments of taking time to be creative?

Joe: This year we released an EP (Suggestive Listening) for record store day, it was a much smaller campaign and collection of songs but it gave us a lot of time away of touring and out of the band. It’s a nice shift to give more time to writing and studio time. It’s been quite a couple of years for us—with releasing albums quite close together and doing a lot of touring. And meanwhile, your gear remains locked-up or in the back of the van most of the time. It’s good to get it in a different environment.

What was the time that you guys realized that you wanted to take yourselves seriously as a band?

Rhys: I think we always took it seriously from the start. Not in some career-ist way. I think, quite quickly, you realize that in terms of chasing a career out of it, you can lose yourself. Like what are you even chasing? To be in America out of just wanting to make something creative is amazing.

What’s the quality of someone’s live sound that keeps you listening? What are the best parts about playing festivals?

Joe: We watched Beak> last night and we felt really inspired by the way that they mic their instruments. It worked perfectly with their music and how they recorded their albums. It’s a cool way to bring out their playing style or how someone hits the drums — it’s more interesting than a regular stage plot.

Rhys: Playing a club show is always the way we want to be heard. Playing inside is ideal.

Joe: Things can always be tricky when you have fifteen minutes to get all your shit onstage and then quickly check if everything is working. It’s always a lot more difficult [at festivals] than your own show.

Rhys: You just deal with what you have. And when you have a really warm audience, it’s interesting how you don’t care about what mix you have. You probably care more about mixing when you feel that the audience isn’t in it. That’s when you come together the most.

Rhys: Album sometime next year. Hopefully, we can come back from America with fresh ears.

Make sure to check out Ulrika Spacek’s latest EP Suggestive Listening out on all streaming platforms.