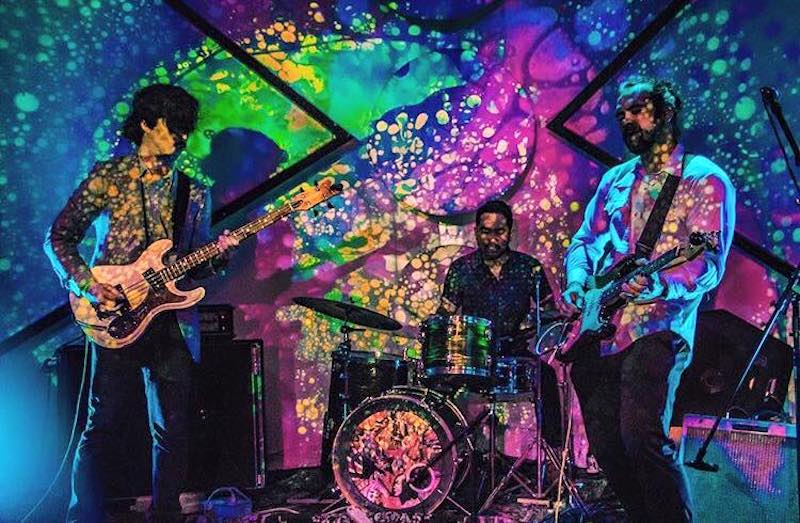 The last we saw of Trabants, they were playing a set at Echo Park Rising back in August. It turns out that well before then, the band’s leader, Eric Penna, had begun working on a new album. That album, which emulates spaghetti westerns of the 1960’s, is finally finished after a painstaking process, and will officially come out on November 26th. Take a listen to Nel Cuore Di Una Terra Selvaggia (In The Heart of a Savage Land) in advance below and mark your calendars for their performance at Harvard & Stone the following night, Tuesday November 27th.

Penna’s mission when he set out to create this record was simple yet specific: “I wanted to create something that played like a movie in your mind as you listened.” He found spaghetti westerns particularly compelling musically, and so he developed an obsession with the genre. He wrote the new LP after watching classic Italian movies, and it does indeed feel like a tale from the wild west. Penna strove for authenticity as far as the instrumentation was concerned, which are one of the essential reasons that the new music is so very immersive. It also was a key moment that showed how much he truly cared about getting it all right, which is why it has taken him nearly three years to release new material:

“I spent 8 of those months on hold looking for a harpsichord that would stay in tune well enough to record since it was a pivotal sound I wanted to incorporate. I ended up hitting the jackpot in skid row where a man named curtis berak has a huge space where he restores old harpsichords and maintains those of the Los Angeles philharmonic. He kindly set me up with one of the most majestic instruments I have ever played and it became the cornerstone of the whole project.”

From the outset, this is a study in Westerns. Just like any decent soundtrack, the tracks paint a succinct scene, should you care to follow along with their version of the story. The beauty of an  independent score is the space to imagine your own story instead. However you interpret it, it will always have elements of exposition, action, and suspense. Characters can be heard wandering in and out by the sound of horns and whistles. The recording process for the album could be described a similar way—as slightly transient, but made better for it. This is of course the nature of Trabants: as an instrumental rock band with a rotating lineup. But the process touched Penna more than usual:

“This band has always had a rotating line up and I got to really utilize contributions from many different people on one album. We could utilized a totally different palate of sounds like flutes, whistling, orchestral percussion, string bass and mixed it with the surf/garage thing we’ve done before. It really felt like an orchestra of people had played once it was all over.”
See Trabants play alongside Premonitions on their final residency night at Harvard and Stone on Tuesday, November 27th. Pre-order Nel Cuore Di Una Terra Selvaggia on Bandcamp. Follow the band on Facebook, Twitter, and Instagram.

Listen to the full album: