Brookside, a golf course and country club bordering the Rose Bowl hosted the Pasadena Daydream Festival on Saturday August 31, 2019 and it was “Hot, Hot, Hot!!!” The lineup was hot; the setlists were hot. Everyone was hot. We’re talking literally and metaphorically here, though the setlists were probably just figuratively hot.  A legion of music lovers, largely clad in black, braved some seriously sticky heat to enjoy a fantastic music festival curated by Robert Smith of The Cure.

Pasadena Daydream Festival’s two stages provided a steady stream of music with thankfully no overlap. If you wanted to see every band and arrived early enough to get through the excruciatingly long security lines, you could have experienced them all. Unlike some festivals, there was not a band or artist that should be missed.

Kælan Mikla, an Icelandic trio, brought their brand of dark synth, post-punk goth to the Willow stage. Hearing this band, you would logically assume that the wardrobe would necessitate a head-to-toe black on black ensemble with perhaps, should science allow, an even darker color. Bassist Margrét rósa Dóru-Harrýsdóttir looked the goth part, all dressed in black with a Cleopatra cut dyed a shade of Raggedy Ann red, but singer Laufey Soffía Þórsdóttir opted for a Scandinavian summer dress that brought more than a few of us Midsommar flashbacks. True goth fans that arrived at the festival later in the afternoon missed one hell of a performance that included songs like “Næturblóm” and “Kalt.” Robert Smith enjoys this band so much that they have been included in the lineups to three of his personally curated festivals.

Scottish rockers The Twilight Sad were the first to play The Oaks stage. Singer James Graham promised the crowd some “miserable Scottish music,” and he and his band did their best to deliver. Any seasoned festival goer knows that one or more bands are going to be bitten by the “sound problems bug.” Unfortunately for fans of the band, it was The Twilight Sad this time. They did ultimately recover for a few songs, but sound issues marred their already too short 30-minute set.

The Oaks stage maintained its Scottish status as the next band up was Mogwai. At times, they were sort of reminiscent of Sonic Youth or My Bloody Valentine if no one in those bands sang. Mogwai is what an instrumental band must be, which is precise, tight, and a good live show. “I’m Jim Morrison, I’m Dead” was a fine slow burn of a song, and “Old Poisons” was loud, harsh, and melted faces off (in a good way).

I’m not sure who brought the most “gothy” music performance to the festival, Kælan Mikla or Chelsea Wolfe. Wolfe seems to have a broader base of influences.  Her discography is certainly more varied by genre, but she chose a set awash in reverb with sweetly dark melodies that alternated between brooding to driving, heavy riffs. It was a perfect blend of the two biggest acts on the ticket: The Pixies’ loud, soft, loud style of music, and The Cure’s gothic brooding and darkly, longing pop. Wolfe’s set had her channeling Siouxsie Sioux on a doom metal bender while trying to hide an affinity for Appalachian folk music. While she didn’t play anything from her forthcoming album, Birth of Violence, songs of note included “16 Psyche” and “Survive.”

The festival swelled from good attendance to “wow, this is a lot of people” during the Deftones’ performance.  With the sun and humidity bearing down, a herd of people move in large mass from the Willow tent, the entrance, bathrooms, and the plethora of food and drink stands as the opening chords of “Be Quiet and Drive (Far Away)” rang out into stifling air. Seeing thousands of people rush to a crowd that already contained thousands of people was something to behold. Frontman Chino Moreno, dressed in all white, sang the songs with his whisper to a scream technique as the band worked the stage and expertly played their riffs, bass lines, and pounding drums. The band played the song “Gauze” live for the first time during the middle of the set, right after “Hole in the Earth.” Moreno joined the crowd for a little while he sang “Knife Prty.” Upon his return to the stage he seemed a bit sweatier and remarked, “It’s hot, but it’s lovely.”

Every now and then, if you go to a festival or see an opening band in concert, you find an amazing live band. The Joy Formidable are nothing short of electric live and easily the most entertaining performance of the festival. Ritzy Bryan, Rhydian Davies, and Matt Thomas are not only fantastic musicians but are energetic, engaging, and hilarious.  Upon finishing “Cradle,” Matt’s snare drum took a bit of damage, though his nearly four-foot gong was perfectly usable and still untouched. While he tightened and tested his snare, Ritzy introduced the band to the crowd. Soon after she mused that she wouldn’t be a very good marathon runner stating, “I came out of the gate like Raahhh, and then I’m like fuck me— why am I wearing velvet? It’s fucking boiling. What a dick!” To which Rhydian doing his best Ron Burgundy impression replied, “Milk was a bad choice!” After a few moments Ritzy asked Matt how his snare was to which he responded, “It’s probably gonna die.” It’s alright to be pessimistic drummers is it,” Ritzy remarked to the crowd. After ascertaining how many drummers were int the crowd, she asked “Are you still drummers or have you all been sacked? I’m jokin’— kinda.” Deciding that the snare might hold, the band launched into “Passerby.” How good were The Joy Formidable? Almost everyone stayed to the very end of their set virtually dooming any decent sightline of the Pixies.

When the crowd left The Joy Formidable set at the Willow tent, they were met with an enormous crowd waiting for the Pixies. The band started with an extended bass run on “Gouge Away” and followed with “Bone Machine.” After a few songs, it became evident that Paz Lenchanten was doing a fantastic job on bass and backing vocals. Something else was different, though. Frank Black had slicked back hair. If you’ve ever seen Black live from the 90’s to the present, you would know how strange it was to see his head unshaven. They played most of the old hits and surprised us with “Catfish Kate” and “Bird of Prey” from their forthcoming album, Beneath the Eyrie.

The Pixies are a great band with talented musicians that play great songs. They are not what you would call flashy. Usually, the only showy thing they do during an entire set is Joey Santiago’s guitar solo during Vamos. Besides using his fingers, he’s been known to use all sorts of objects. This time he enlisted his flat cap to rock the solo. The band finished their 25-song set with “Gigantic” and put down their instruments, locked arms, and bowed twice to the audience before waving goodbye. Never once did anyone in the band speak a word during the show.

Looking at the massive crowd after the Pixies performance, it became painfully obvious that if anyone wanted to see The Cure from their current vantage point, they could not move. Bathrooms, food, drink, and sadly, Throwing Muses would have to be missed. I made the painful decision to miss Kristen Hersh and her band Throwing Muses. There would be no “Bright Yellow Gun” or “Not Too Soon” for me. A few of my acquaintances made me quite jealous with their reports of how great the band’s set was. I had to remind myself that seeing The Cure from a mile away would have caused greater regret.  I can only hope to see Throwing Muses the next time Hersh reforms them.

The sun had been down for an hour as most of the Pasadena Daydream crowd waited in their spots. It was still hot and muggy, but the anticipation of the show did not allow for any lack of resilience now. Once the smoke began billowing and red light flooded the stage, the band took to the platform with instruments in hand to thunderous applause. “Plainsong” drifted through the dense evening air as the crowd simultaneously lost their minds. Robert Smith crossed his arms, almost holding himself as he took in the audience. He gazed out at the mammoth crowd for a few moments before he draped himself across the mike stand and began to sing “I think it’s dark and it looks like rain, you said” as the smoke engulfed him. Before the song had finished someone had brought him a guitar, and the band instantly began to play “Pictures of You.” Bassist Simon Gallup and Smith nearly merged their bass and guitar as the two played the intro to the song, each instrument’s neck radiating out in opposite directions. The Cure went on to play a Disintegration heavy setlist with several favorites in for good measure. The biggest surprise of the evening was their inclusion of “Just One Kiss” to the setlist. It’s been reported that the song from the Japanese Whispers album had yet to have ever been performed by The Cure in the United States. If it has, it has certainly been rare.

The Cure have been around for over 40 years now and were recently inducted to the Rock and Roll Hall of Fame. After all these years it is still a joy to watch Smith sing songs while playing his guitar or throwing his hands up dramatically when alone with the microphone. But honestly, nothing seems to please the audience more than to watch his signature sashay dancing and they were treated to a handful of examples Saturday night. The happy pop hits and morose goth deep cuts blended seamlessly for nearly two hours as the band played songs like “A Forrest” and “Just Like Heaven” before closing with “Disintegration.”  A sweaty and winded Smith waved to the audience as he and his band left the stage. It had been 20 songs…. Surely an encore was forthcoming?

Moments later The Cure returned to the stage. Smith asked the audience, “How do you feel?” He then informed us “Here’s 30 minutes of popular music” with the band leading into “Lullaby.” Smith spent much of the encore without the encumbrance of an instrument, leaving him free to dance and engage with the audience a bit. He sang a bit of the Pixies “Where is my Mind” before playing “Friday, I’m in Love” to the delight of the crowd. Having already asked the audience about how they felt, Smith let them know that “it’s been the best day of summer.” With that, The Cure left the concertgoers on a high note, playing “Boys Don’t Cry.” 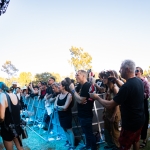 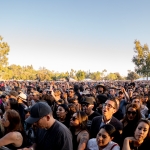 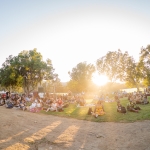 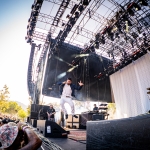 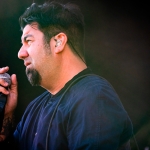 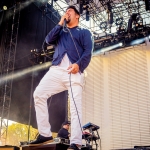 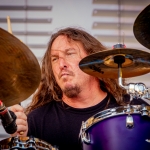 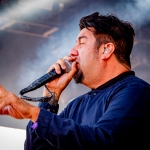 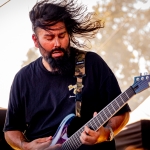 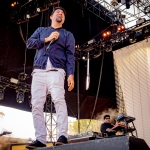 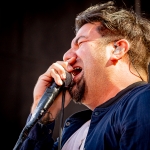 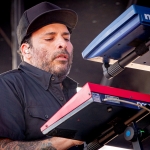 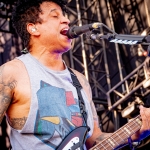 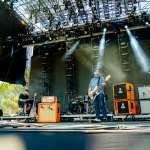 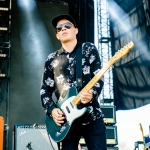 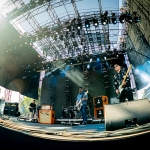 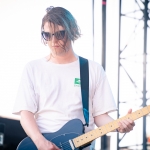 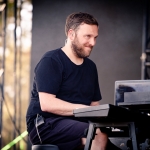 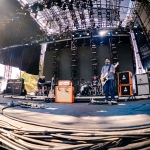 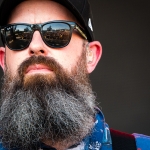