You’d be hard-pressed to imagine a way that Day Two of ACL Fest could have been different from Day One. Whereas the day before had everyone putting on sunblock and buying cowboy hats/sunglasses (I know I had to), Day Two created an ocean of umbrellas and ponchos.

After the first day, I thought I had a pretty good handle on the supplies necessary to brave ACL Fest. I headed to Wal-Mart at 5:30am and grabbed a new backpack, hand sanitizer, Febreeze, gum, band-aids for my newly acquired blisters and everything else I could think of. I was pretty damn proud of my ability to plan and off we headed to the festival.

But all my planning was for naught, as I forgot the one thing needed most: the poncho. We waked our way to the festival, or in my case, hobbled my way, and as we crossed the Colorado River/Ladybird Lake, all you could see on both sides were rain clouds and drizzling. But we had hope things would let up, and onward we soldiered.

We started the festival with an interview with the Suckers, a progressive rock-band based out of Brooklyn, New York who played 2009 SXSW here in Austin. The band only has out a single EP of 4 songs, but is currently in the studio finishing up some new material for a full LP release, but more on that during Sunday’s coverage when the band plays.

After the interview, the rain let up and we were able to get out to the Grizzly Bear show at the Dell stage. The crowd was excited with seeing the band away from the bad weather as the sun had finally started to peak its way through the thick quilt of clouds. Grizzly Bear played a solid set, being forced a little back from the front of the stage due to the rain. Grizzly Bear played SXSW already and apparently rocked the house, but this time around, some of the pure musicianship from the album just didn’t translate. Maybe it was the potential of rain or maybe it was the open-air format, but when the mud settled, it felt like some of their magic was lost.

By this time, the sun had come out and we were thinking today would end up being great. The rain wasn’t too bad to have destroyed the landscape and Paul and I were both comfortable taking photos and not being worried about our equipment getting destroyed. Flogging Molly was the next stop for us and the energy and anticipation of the crowd made the air crackle. Or that’s what I thought it was, because about 5 minutes before the band started, the rain went from a drizzle to a torrent and we just couldn’t risk the equipment.

To the chagrin of all in attendance, we had to push our way back out of the crowd and stand on the edge of everything where the band did their thing. From the first note, the crowd was going and many folks there were warning people to go ahead and put their umbrellas away because once the pit started, all rules were off. Big words, but the actions didn’t quite match. Even the diehard who were willing to let the music move them found their spirits a little soggy. But the band never let up, probably because they’re used to this sort of weather in their native Ireland.

We headed back to the Press area to escape the rain and hopefully wait things out. Luckily for us, a media outlet didn’t show up and their tent was available for some of us to hang out in. After about an hour we checked the weather and it just wasn’t going to let up for the rest of the day, so we made the call to leave for the day and see how things would be the next day. For my purposes, I could watch coverage on Hulu and see some of the bands we wanted to cover. Unfortunately for Paul, photos of his computer screen don’t have quite the same impact.

As for the bands later that night, only Ghostland Observatory was being broadcast on Hulu. Watching the show online was a much lesser experience, but some of GO’s patented badassery still came through. Austin music fans have no doubt seen this distinct duo, but it was nice to think of all the exposure the band would get from Hulu and ACL itself. Electronica fans know who they are, but what about fans of Pearl Jam or Flogging Molly? Now they’d get a chance and Ghostland didn’t let Austin down. Frontman Aaron Behren stalked around the stage like a pro, his high pitched, Freddie Mercury-laden voice echoing throughout the park.

Right before I hopped into the shower to wash off the funk of the day, Paul told me he had a 103 degree fever and wouldn’t be able to shoot on Day Three. Now I was going to be writing and photo-documenting the event.

All I could hope for was a better climate than Saturday, otherwise, things were going to get really tricky, really fast. 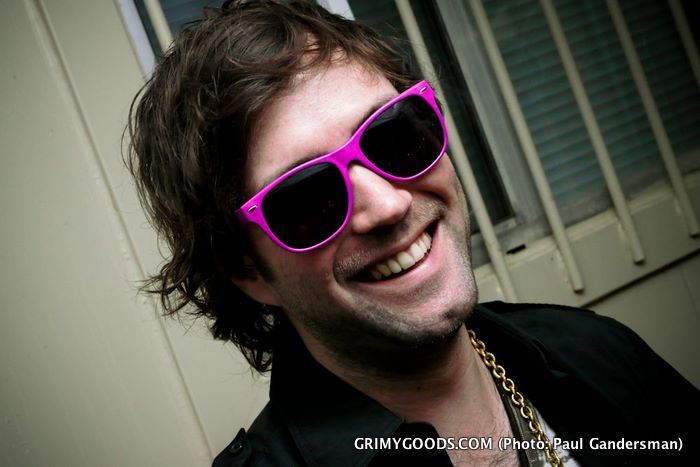