If you weren’t at The Echo on January 20, 2010, and I’m guessing you weren’t because it was pouring rain and no one goes out in the rain in this town, then you really missed out on an amazing show.  I’ve been to a lot of shows but I’ve never seen every act of the night put out such a strong performance.

When we first walked in the place was a little empty, probably because of the end of times weather.  Heavy Young Heathens took the stage first and rocked out like The Echo was packed.  I was amazed by their skill and that two brothers, Aron and Robert Mardo, could deliver so much intense, face-melting rock.

There are plenty of pairs of dudes with synthesizers trying to make magic happen, but this is totally different.  Heavy Young Heathens play drum and bass first, and then lace keyboards and theremin through their songs.  Thrashing around in jeans and a leather jacket, with big black hair, Aron seduces beats out of his bass while dancing with the theremin.  Between the leather and songs like “Sha La La La La,” Heavy Young Heathens are like a modern, almost psychedelic version of Primal Scream with a Ramones influence and quite the sense of humor — as seen in their song “Gone Stamos” and with all their loud la la las.

If you live in LA and you don’t know how to deal with weather, stop giving a fuck about getting wet and go see Heavy Young Heathens. They’ll kick your ass, make you laugh, take two puffs of a cigarette on stage just to put it out, and then Robert will come out from behind his drum set with an acoustic guitar to sing you a sweet lil 60s pop love song with dark synth waves.  Your face will melt, your heart will melt, and then you’ll remember they’re brothers and try to come up with a master plan that will get you into having the holidays with that awesome family instead of the one you were born into. Meanwhile, they’re finishing their set with Johnny Cash’s “Who Do You Think You Are” and you’re singing along just to get back on earth.

By the way, you can download HYH’s full album on their Web site, heavyyoungheathens.com.

* The Heavy Young Heathens also played with The Blood Arm and The Ettes. Check out their reviews and photos too! 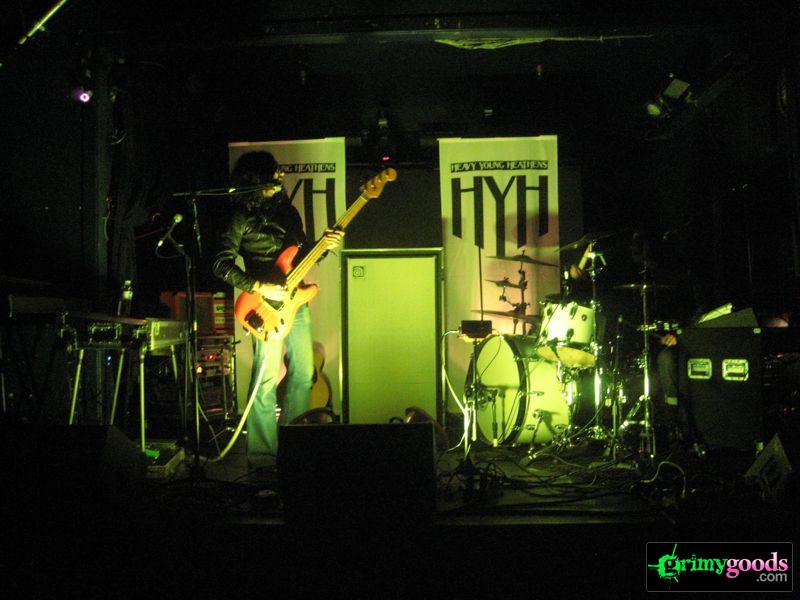