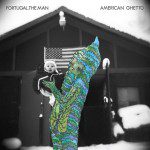 Listening to “American Ghetto,” the brain categorizes sounds and rhythms heard by referencing them against other bands and sounds heard before, but it isn’t long before it’s apparent that nothing quite fits for Portugal. The Man. Because the band creates an intriguing blend of snyth-laden ambience, delicate vocals, beautiful harmonies, and inspiring lyrics that pull from many different artists, but without copying them completely. So the result is still very unique.

Made up of former members of Anatomy of a Ghost, Portugal. The Man writes soundscapes that sweep up from the cold tundra of their native Wasilla, Alaska, and meld hotly with the indie thoughtfulness of current home-base Portland, Oregon. “American Ghetto” is the latest of the band’s six-album stretch that started back in 2006, and it marks a turn in the band’s cohesion of songs and album order. From the beginning of the first track, “The Dead Dog,” Portugal. The Man gives you finely produced layered guitars played slow and wet, buzzing basses and keys, sharp drums, and excellent singing from John Gourley.

From there, the album strengthens with a pace similar to a live performance warming into a room. The synths become slightly abstract, and drums more driving when needed, and most impressive of all come the vocal teamwork of Gourley along with Ryan Neighbors and Zachary Scott. As the band progresses through tracks, Gourley frees his vocal range to spill into his signature high-pitch yet watery tone, with Neighbors and Scott supporting. The vocals really begin to shine and their mixing is superb, with voices emanating from different depths and directions and with impeccable timing.

The rhythm of the entire album is so tasteful, with songs ending when they should and stretching when necessary. The album climaxes eight songs in with the catchy “Do What We Do.” With the bass driving, vocals riding, and synths paving the way, you can’t help but shimmer backseat with them as they steer into desert horizons.

Portugal. The Man then lights a cigarette for the comedown, and through a three-track finish brings you full circle back to feeling good, “When the war ends, we’ll wonder what it was about. When we grow old, we’ll all wonder how we missed out.” And with that they leave you, no doubt eager for a chance to see them live.

4 thoughts on ““American Ghetto” by Portugal. The Man – Album Review and Stream”