These kids seriously look like they’re barely of legal age but perform as though they’ve been doing it for decades. San Francisco’s latest indie sensation, The Morning Benders played a fun set at The Troubadour last Thursday, March 25, 2010. Maxing the venue out until there were no more tickets available, all sorts of people were in house. From industry peeps and musicians such as Kelcey Ayer and Taylor Rice from the Local Natives and of course the many die-hard fans, it was an exciting show. Which by the way, I couldn’t help but notice how many Asian hipsters were in the house. Considering the adorable Morning Benders have some Asian background, they sure did bring in the Asian persuasion to The Troubadour that night. 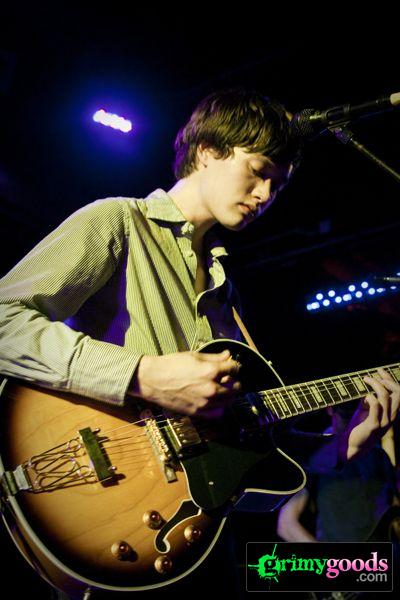 Although the boys played a relatively short set consisting of nine songs all from their new album “Big Echo” and a cover of Neil Young’s “Bad Fog of Loneliness,” as their encore, it wouldn’t have hurt to play some old tunes from “Talking Through Tin Cans.” In fact, I recall hearing an annoyingly funny kid with a curly red afro yelling out “Chris Chu, Chris Chu, play some old shit you pussy!” It was actually kind of funny and even funnier when I realized they were friends.

With their angelic faces, these guys can sure bring the heat as though it were straight from hell—the boys know how to work the crowd and engage us with their charming musings. Opening up with the lovely “Stitches” where the arrangements flow so beautifully with a touch of psychedelia, The Morning Benders then got us grooving to the sweet sounds of “Promises.” The boys then turned up the hip shakes and smiles with “All Day Daylight.” As I looked around, the crowd was happily singing along to the chorus, “And somewhere someone sails the ocean, somewhere someone’s sailing the seas, somewhere someone’s calling out my name, somewhere they can’t see me…” But the real goods came when the boys closed with their hit song “Excuses.” Check out the video below to see this lovely song get a funny candid twist. From the crazy crowd interaction to Chu’s holding back from laughing along with his candid words, it was a really fun closer. Also,the boys had an explosive psychedelic outro of about three whole minutes ending with the Benders kneeled down in a pose. Click here for the photo.

Very good shit. Go check the boys out live and do yourself a favor and buy their new album “Big Echo.”

Click here for a photo of their full setlist.

6 thoughts on “The Morning Benders at The Troubadour – Full Show Review, Photos and Videos”