Ever since Klaxons catapulted into the indie new wave scene in 2007 with their Mercury Prize winning debut album, “Myths of the Near Future,” they’ve harnessed a sound that’s difficult to ignore. Three years later now, the London four-piece struck back with their new album, “Surfing the Void,” and played a sold-out show at the Troubadour last Saturday in West Hollywood.

The line stretched around the corner of the venue even an hour before doors opened. Though I spotted some neon glow necklaces, the crowd seemed eclectic. There were even some metal heads!

Baby Monster opened with airy, poppy electronic songs that got some of the audience members dancing.  After their set, many eyes dashed up impatiently towards the upstairs band lounge where the Klaxons readied themselves before their entrance on stage.

Their record label, Polydor, initially rejected their latest album for being too experimental so they had to re-record parts of it.  The album cover alone exudes eccentricity; it features a suited-up astronaut cat. With that in mind, it’s hard to expect what was going to happen once the band came on stage. A tiger costume head rested atop an amp and set the scene as the members came on stage with a roar from the crowd.

They opened with “Flashover,” the satisfyingly fast paced song from their new album. The danceable pop elements of Klaxons’ songs are exciting because they possess a sense of urgency and danger—at any moment their calm falsetto and psychedelic guitar parts can give way to thrashing drum beats and rough, commanding vocals.

Around the middle of their set, the crowd completely exploded when they played, “Magick.” People danced so hard that the contents of my pockets fell out as I was thrust into the edge of the stage. It was madness but in the best way until they finished their last song and some crazed fan instantly jumped on stage (before the band even left) and unsuccessfully ripped a duct taped set list.  So much for concert-going etiquette.

Nonetheless, Klaxons returned for an encore and closed the night with “Surfing the Void” and “Atlantis to Interzone.” Yeah, Klaxons still destroy after three years. It’s definitely not over yet. 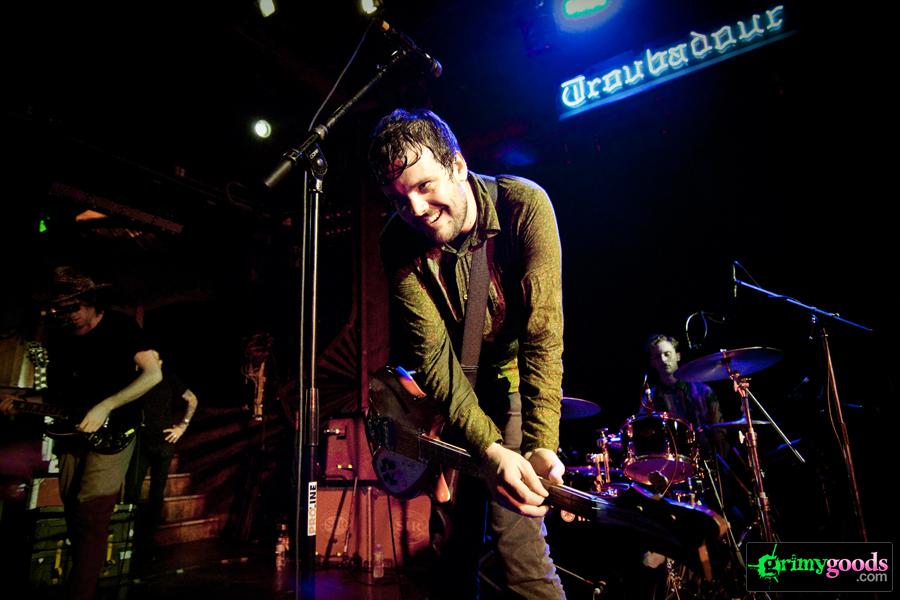 6 thoughts on “Klaxons at The Troubadour – Photo Gallery & Review”