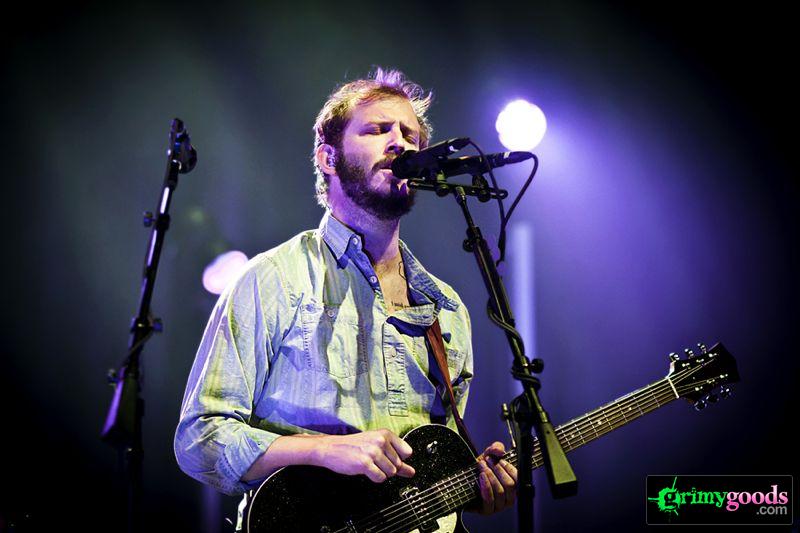 After winning the hearts of just about every female in America with his heartfelt debut, For Emma, Forever Ago, Justin Vernon—the famed indie soul-folk singer of Bon Iver, performed a breathtaking show at the Gibson Amphitheatre in support of his self-titled sophomore album.

As the second show to his sold-out performance at the Shrine the night before, the Gibson was nicely packed but not all the seats were filled. Although the Amphitheater was an uncomfortably chilling temperature, there was a warm and exciting vibe radiating throughout venue. Fans were respectfully quiet, aside from the drunk blonde that was escorted out of the venue as she kicked and punched to a cantankerous babble of absurdities. Who the hell gets wasted drunk at a Bon Iver show?

Opening up this stellar evening of music, were Oklahoma’s Other Lives. We had caught the five-piece ensemble at Sasquatch! this past May and were totally and utterly awe struck. I don’t think Bon Iver could have been paired with a more suitable and comparable supporting act. Other Lives have this sheer grace and humbling quality. Their music is captivating with rich lyrical content and a remarkable mix of soothing instruments. With each member effortlessly transitioning from one instrument to the next, Other Lives are a truly apt group of multi-instrumentalists that exude some of the most beautiful renditions I have ever heard. Playing a gorgeous selection of tunes from their latest and most powerful release, Tamer Animals, Other Lives definitely gained a whole new rack of fans on their tour with Bon Iver. As I headed to the hospitality patio during intermission, it was great to hear new fans praise the undeniable talents and engaging forces that Other Lives hold true to their name.

As the anticipation grew thick for Bon Iver to take the stage, the moment the house lights dimmed an echoing cheer roared through the crowd. Our usual bearded, t-shirt-wearing hero (Justin Vernon) was clad in a babyblue long-sleeved collar shirt and a pair of chinos. A surprised fan whispered, “Whoa. He looks like one of my college professors.”  Square attire or not, Vernon could be suited up in a clown’s outfit and it really wouldn’t matter. The man’s music speaks mountains. 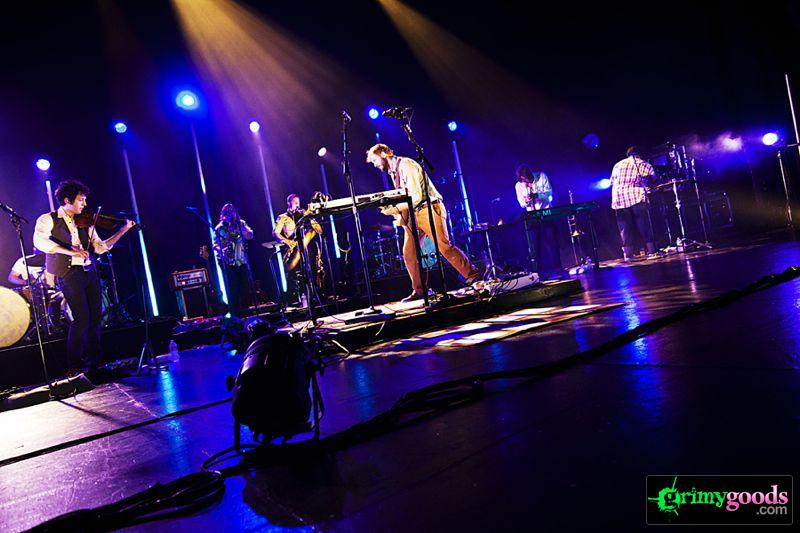 Taking the stage with a large ensemble of strings, brass, winds and percussion, Bon Iver opened up with “Perth” off their new album. The song became large than life on the stage of the Gibson as Vernon’s subtle guitar strings played the prelude to a very emotive song. As soon as the fierce drum rolls came into play, goosebumps immediately took their toll across our arms, necks and backs. This song is absolutely beautiful, yet chilling—and the intense array of percussion only fuels the emotion.

Bon Iver then moved on to play every single song on their latest release with exception to “Lisbon, OH.” Throwing in a few old tracks into the mix to keep early fans pleased and on top of their Emma and Blood Bank fix, “Beach Baby” was a drawn out beauty that involved a sparkling display of smooth instrumentation and Vernon’s endearingly soulful vox.

Alternating between new and old tracks, fans were able to witness Vernon’s tripped-out psychedelic skills when “Creature Fear” came into rotation. The live show on this song was absolutely incredible. It began so soft and sensitive with gospel-like “ooooohs and ahhhhhs” but ended with a wild trip through a black hole. Vernon and his band blasted out some righteous reverb and bubbling effects as the song came to an intense conclusion of free-styling sound. It was one of the best live outros I had ever experienced—completely full of raw life.

Trailing behind “Creature Fear” was “Beth/Rest,” and dare I say it—my least favorite song on their new album—altogether, my least favorite Bon Iver song. From the moment I listened to it on the album it reminded me of  80s softrock, well suited for the soundtrack of an “ABC Afterschool Special.” Although lovely in its own elevator-music way, watching the song performed live gave me a bit of a chuckle.

Closing up with a very high energy, live rendition of “The Wolves (Act I and II),” Bon Iver had many fans fooled that this was their final song of their performance. Yet another skillfully drawn-out of version to their audio track, “Wolves” began to make my eyes water. Its simple beauty, forgiving lyrics and pure intensity with a live band was out of this world. Vernon had the entire crowd sing-along with him during the climatic chorus of, “What might have been lost.” At the song’s close, a few couples made their early traffic-induced departures as they uttered, “This has to be the last song. I don’t think he can top that closer.” What fools …

Bon Iver returned to the stage for a two-song encore performing both “Flume” and “Skinny Love.” To sum it up, it was freakin’ magical. Again, the tears began to accumulate as fans sang along and reached out to the ceiling above to the sweet words of “Flume.” But the real tearjerker came when an acoustic “Skinny Love” ended the entire Bon Iver performance. With all of the band members on stage providing synchronized hand claps and foot stomps, and some soulful back-up vox—”Skinny Love” was the highly anticipated dessert to this magnificent evening. Hearing Vernon croon with so much emotional vigor was like a bittersweet domino effect throughout the crowd. Both men and women were wiping the tears from their faces. It was quite the emotional release.

Listening to Bon Iver on a CD is fulfilling. But hearing them live and watching the marriage of instruments on stage is pure ecstasy. Vernon proved to be on of the best male singers out there, pushing the limits on his soulful chords and harmonic falsetto. As for the band, they are masterful in all of their romantic orchestrations—squeezing every ounce of emotion from your wilted heart. To top it all off, it even sounded better live (something not every musician can master). 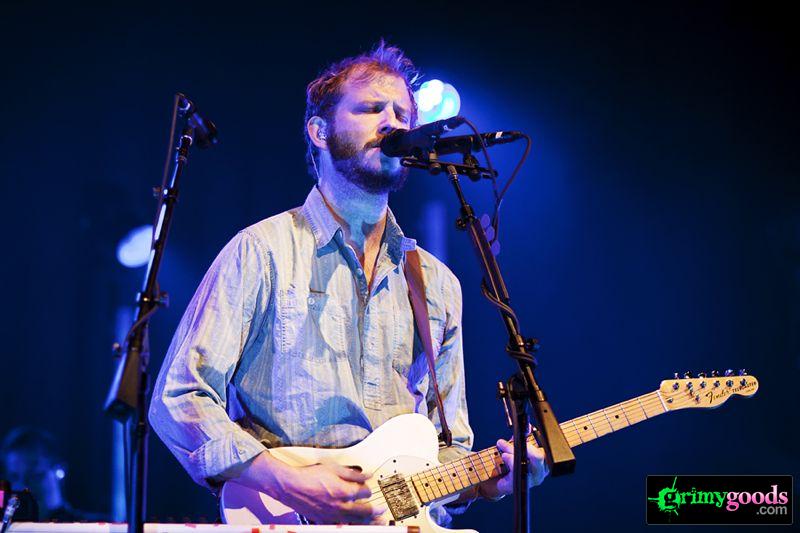 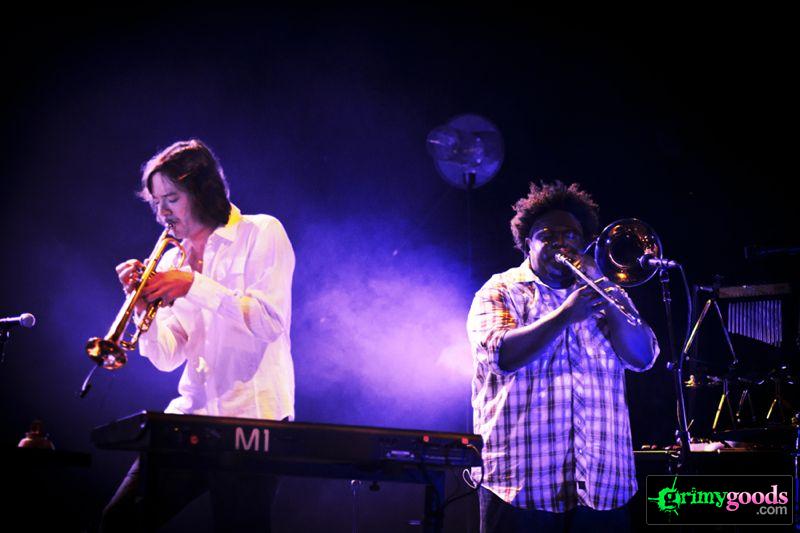 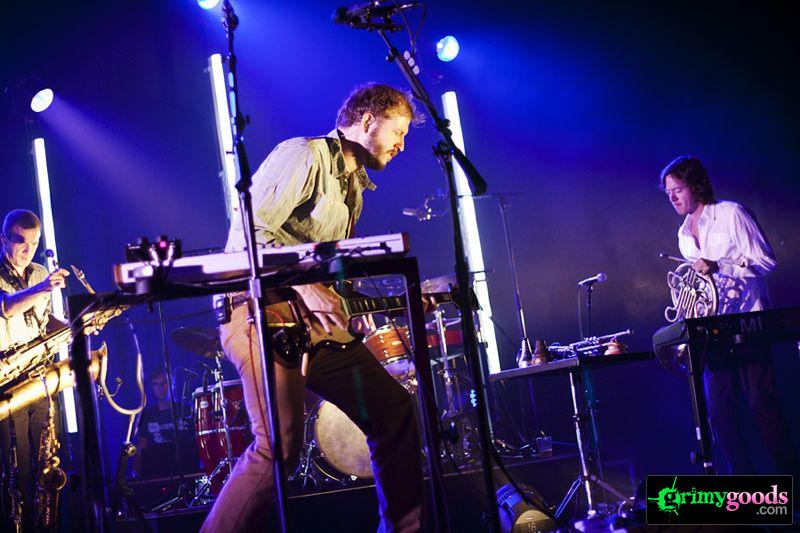 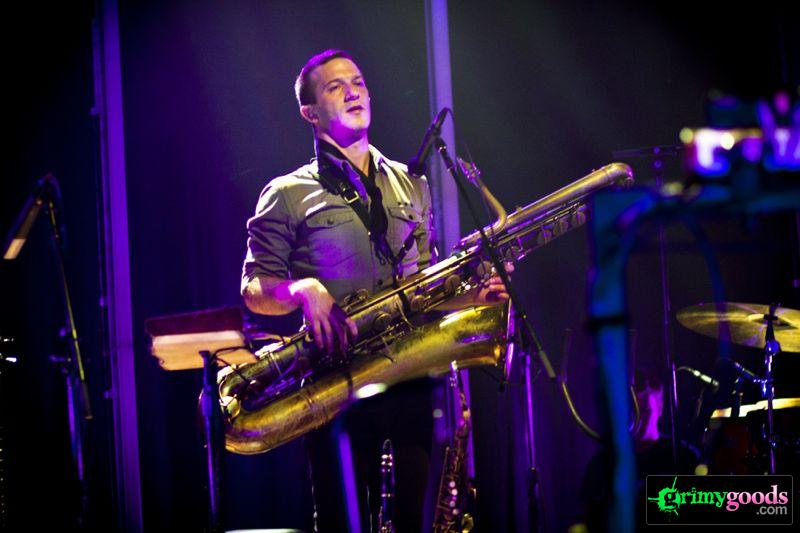 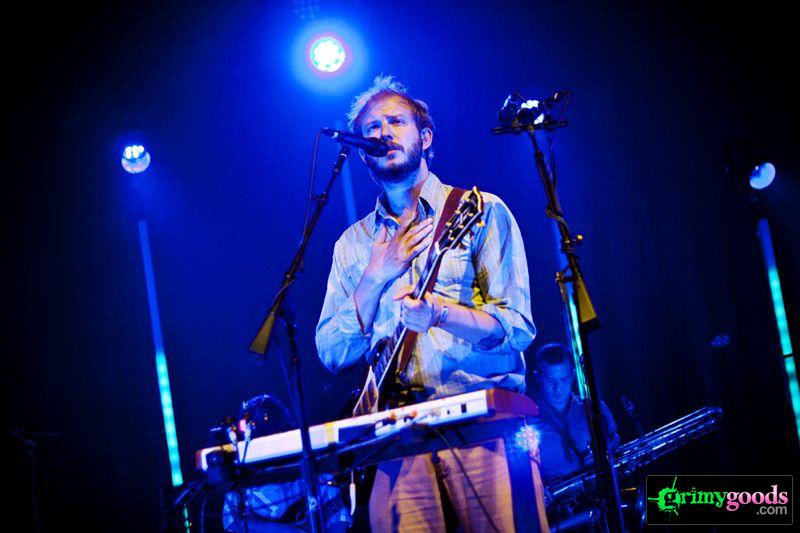 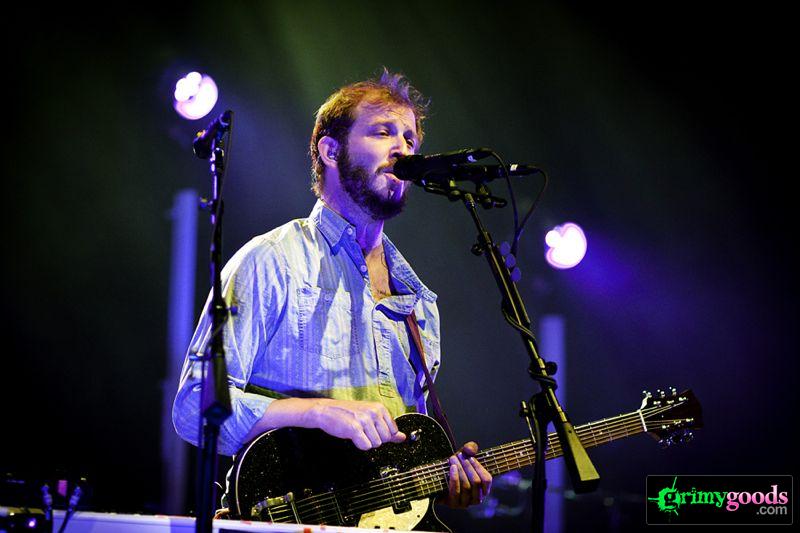 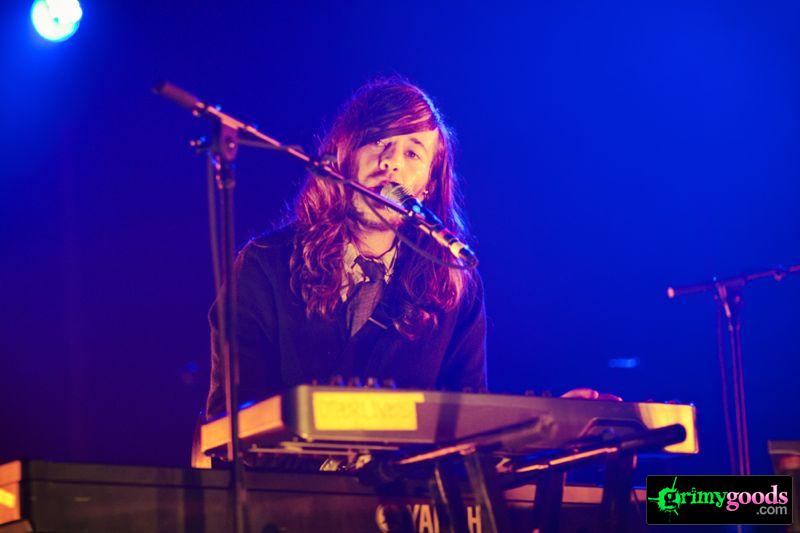 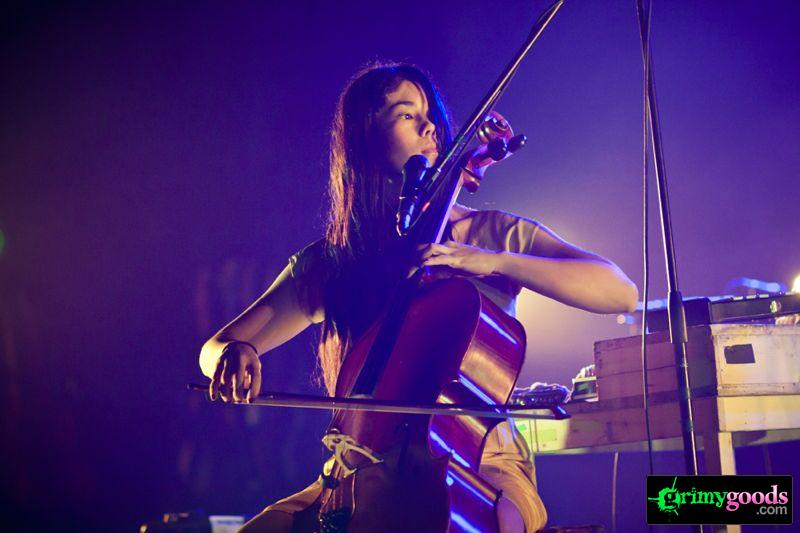 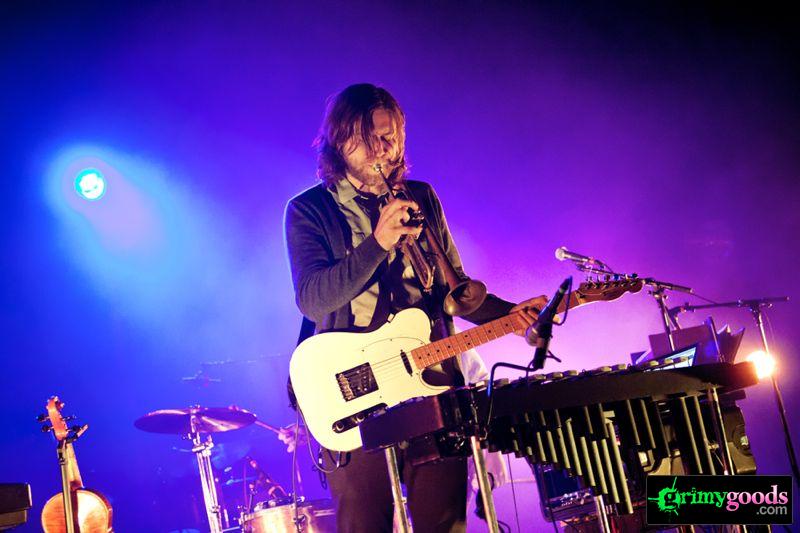 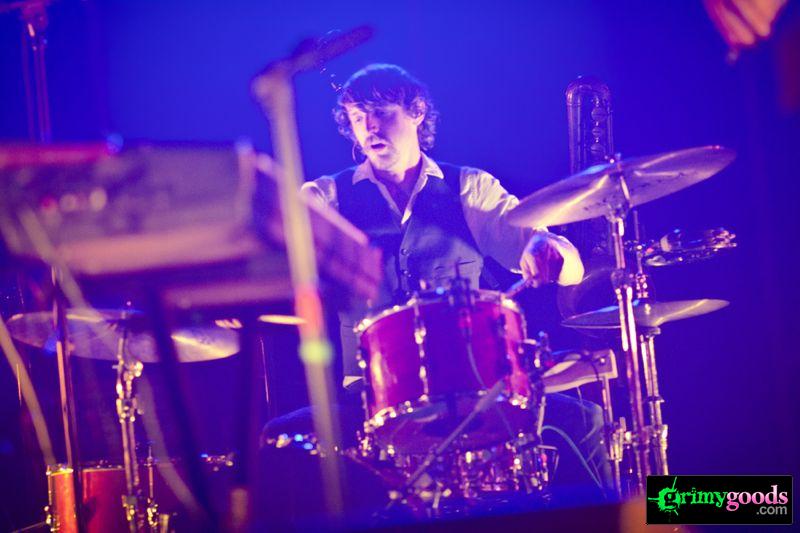 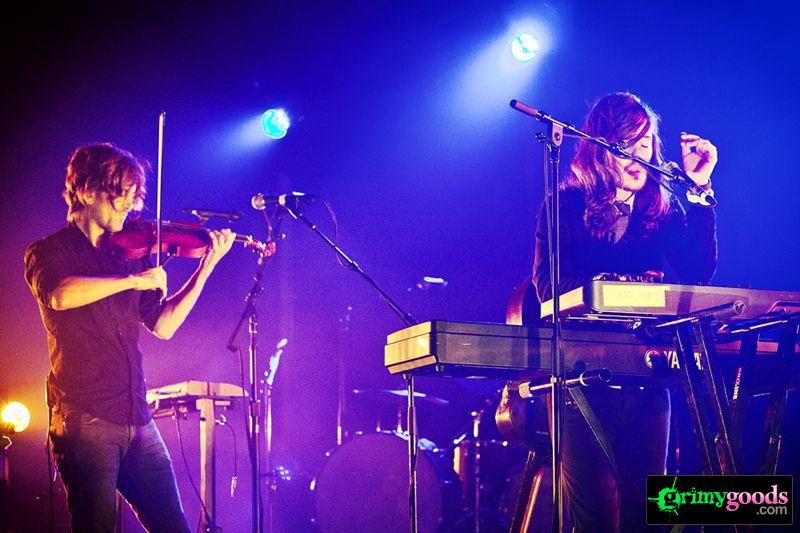 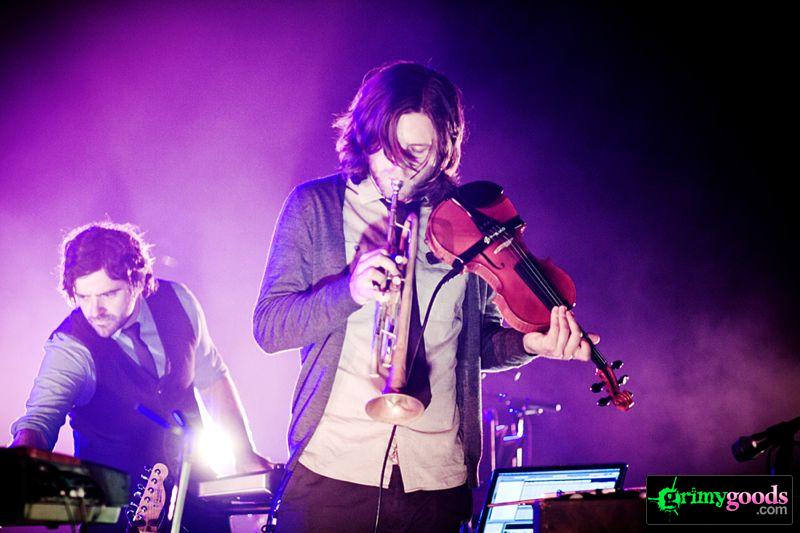 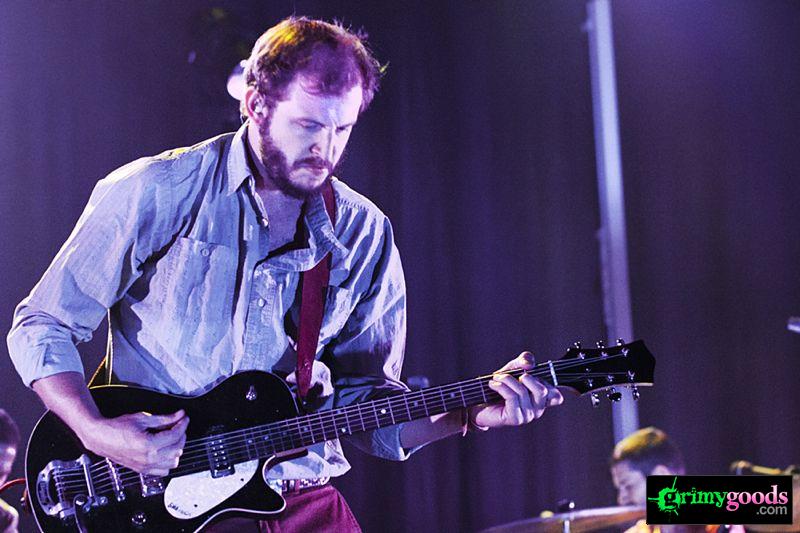