When the hippies all grew up, some people probably noticed that most psychedelic music went with them (not ALL of it, don’t bite my head off in the comments). Then the kids of the hippies remembered their parents’ old records…vaguely. So, amidst a cloud of smoke, some kids blended the old with the new. The mind-numbing tsunami of sound that coated psychedelic and the broody, dark rhythms of stoner rock make pleasant bedfellows. Toss in some gothic industrial, and you might see where Rosenkopf is going with this.

The little info I was able to find online (and there wasn’t much, trust me) told of three members (Soren Roi, Saira Huff and Emil Bognar-Nasdor) who had been operating from Brooklyn, NY since only 2010. Along with the new album, they also self-released two demo tapes; one can say that they’ve been a tad bit busy. And it shows.

Their self-titled album starts off with a song called “Burning Spirits.” It starts off in an industrial tone, creating the overall darkness of the album. The song is almost playful at times: little dribbles on guitar leak out, and weird convoluted sounds that are definitely unearthly. It gets quite trance-y at the same time, with discordant bends that make the wall curve. Midway through the song are some rare vocals for the group. They consist of nothing more than distorted screaming in the background; while some may not like this aspect, I believe it matches the song quite well. Easily one of my favorites on the album.

“Human Love Song” is basically some stoner riffs played over a long monologue that I’m sure is taken out of a movie (though I don’t know which). The song is simple, but overly relaxing and semi-uplifting. Regardless of where it came from, the speech is rousing and the current of music that flows through is a grand companion.

“Heed” features an alienistic robot voice proclaiming what I think is, “Omega!” in between grungy riffs and heavy distortion. This song also has some vocals in it, which are similar to “Burning Spirits.” The beginning of the song is an instrumental treat, with all instruments coming together. Another personal favorite.

“Untitled” is the fourth track on the album. Showcasing an industrial beginning and brief vocals, the song eventually careens into Stonerville once again. Some rockabilly influence comes through in this song as well, almost to the point where it sounds like it should be the background music in a Tarantino movie. Psychedelic is also flung about here, with the last two and a half minutes potentially tripping sober people out.

“Troth” is a song that sounds like a journey. I seriously don’t know how else to describe it. I can imagine flying over desert sands and snow-capped trees with this instrumental blaring all around me. This is their best atmospheric song by far, and the guitar shows off as much as he needs to. Another sweet listen.

The last song is entitled “Light The Way,” and it’s particularly a good album closer. Starting off with some futuristic ambiance, they eventually plunge into the heart of stoner/psychedelic and show the direction they are taking it. The brief vocal bursts are a background accompaniment that is never enough to take away from the music. The ending drifts the listener off to relaxation and then forces them to be upset once they realize the album is over.

As a whole, the album is pretty decent, especially for a debut. The instrumentals are composed quite well, and the mesh of influences creates a soup that is altogether pleasing to the palate. The instrumentation allows musicians access, while the old/new combo will attract listeners from different age and music brackets. Fans of groups like Mastodon and Russian Circles will appreciate Rosenkopf.

The album’s flaws are few, I must admit. I try to be critical of bands, especially up-and-coming groups, simply because criticism only helps one become better. However, on this album, I had to really try to complain. I don’t even listen to this genre of music normally, but I was never bored with this group. Still, I feel that the vocals were kind of awkward. They seemed misplaced, even though they went well with the music. The distortion in general sometimes gets a tad monotonous, and the guitarist, while being good, sticks to what he knows. Not always a bad thing, but when you’re making your first LP, sometimes risks need to be taken.

Rosenkopf, who are playing on the Chaos in Tejas tour 5/31-6/3, will easily find some fans to appreciate their debut album. If they’ve been together only as long as they say, then I think we can expect some good things from these three in the time to come. 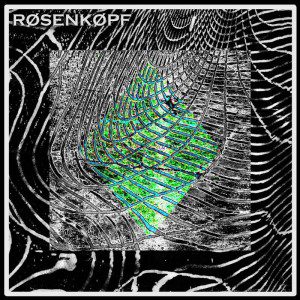