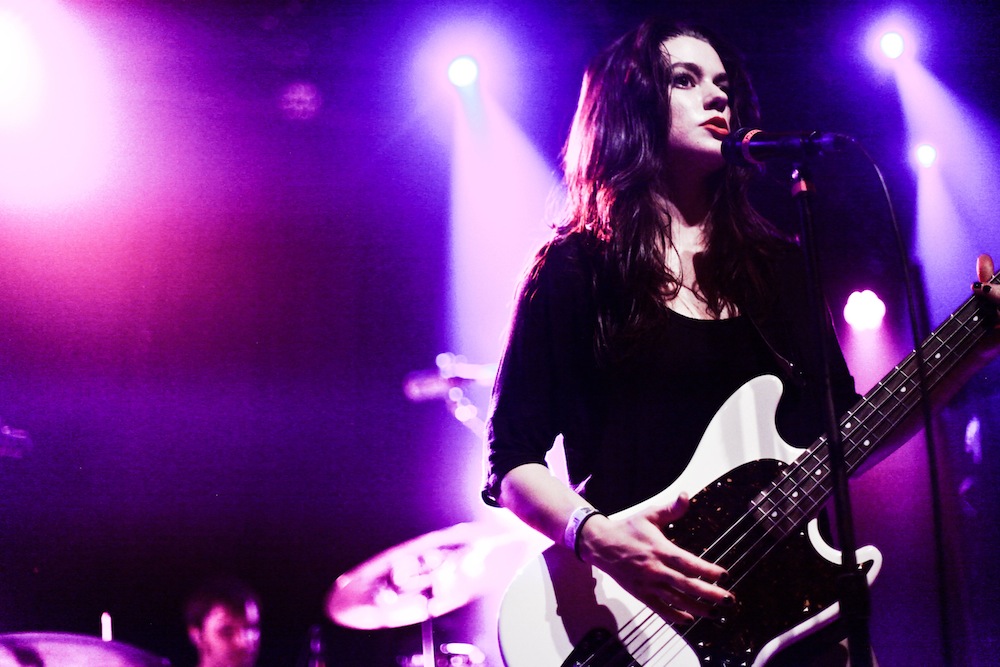 All photos by Pamela Garcia Aguirre

If they ever decide to do a remake of the ’80s cult classic Heathers, about two high school outcasts who plot to kill the popular kids, Los Angeles based singer/songwriter Meg Myers should be tabbed to score the film.

Though those are the artists Myers often gets compared to, it’s acts like Nine Inch Nails and Alice in Chains that Myers was sometimes inspired by. Her song “Desire” is as primal a song about getting laid and comes across as her version of NIN’s breakout hit “Closer”.

“Baby, I wanna f*ck you, I wanna feel you in my bones,” Myers sings. Each time I’ve witnessed the young lyrical temptress live, that line has produced cat calls from male and female members of the crowd alike. Myers sings “f*ck” provocatively, maybe the best use of the word by a female vocalist since Jenny Lewis in the early Rilo Kiley days.

Not many lines later, Myers sings “I wanna kill you, I wanna lay you in the ground,” one of many times she blends eroticism with derangement too perfectly.

Though the lyrical content of her music would suggest her possessing the kind of confidence few people in the world have, Meg Myers the person is much more timid than you’d expect. After talking with her at length, you begin to understand she’s still very much learning things as she goes along. She’s still becoming more and more comfortable on stage without an instrument, something that would have seemed so foreign not very long ago according to the singer yet now comes across as natural instinct. 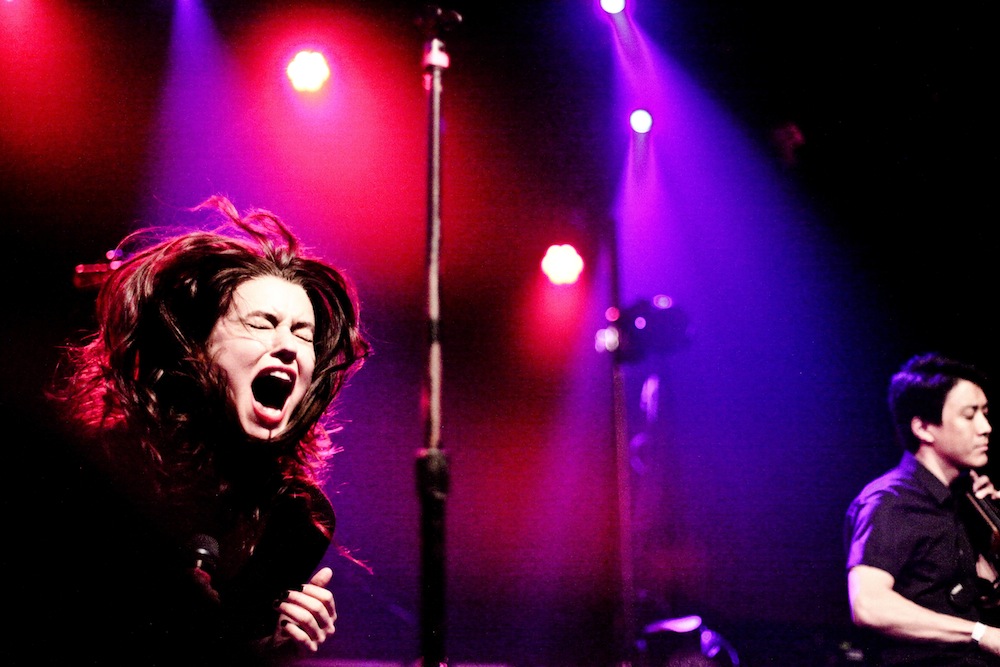 “I think now it has gotten to the point where the less songs I have to play on, the better, and I never thought it would be like that,” explained the singer in a phone interview with Grimy Goods.

“I still, if I pick up a guitar or play bass, those are my babies and I love it so much.”

Having first seen Myers at Bardot’s It’s A School Night in Hollywood in February and then seeing her twice in support of Broods this past May, it was obvious she was still becoming more comfortable not having a guitar or bass in her hands.

Though the Bardot stage may have just been too small and restrictive to her usual routine, at subsequent shows at The Independent in San Francisco and the OC Observatory, Myers really let loose.

“Now that I’ve gone so far out of my comfort zone, I feel like every song I push myself a little more as far as the moving around,” said Myers.

“It definitely is opening up more and more and I feel better and better about it. That has become more comfortable to me because I can focus on singing and what I’m feeling and being physical and I think that’s the best thing for me. It just feels really good to be physical, especially when you’re connected to your emotions.”

These were the final shows of her month-long run with Broods and she was delivering screams like they hadn’t taken their toll. Even further, Myers sold out on every note to the point that she was gasping for air in between verses. At key moments, you wondered if her eyes were rolling back in her head as she somewhat violently flung her arms, almost as though she was the focus of an exorcism.

That description does a terrible job of selling just how sexy Myers looks losing herself in her performance. In those moments, she’s that girl that volunteers the info that she’s crazy, yet you can’t pull away.

It certainly doesn’t hurt that she also looks like a prime Alyssa Milano and often wears short shorts that had members at her Observatory show wondering if she had anything on below her oversized black T-shirt. 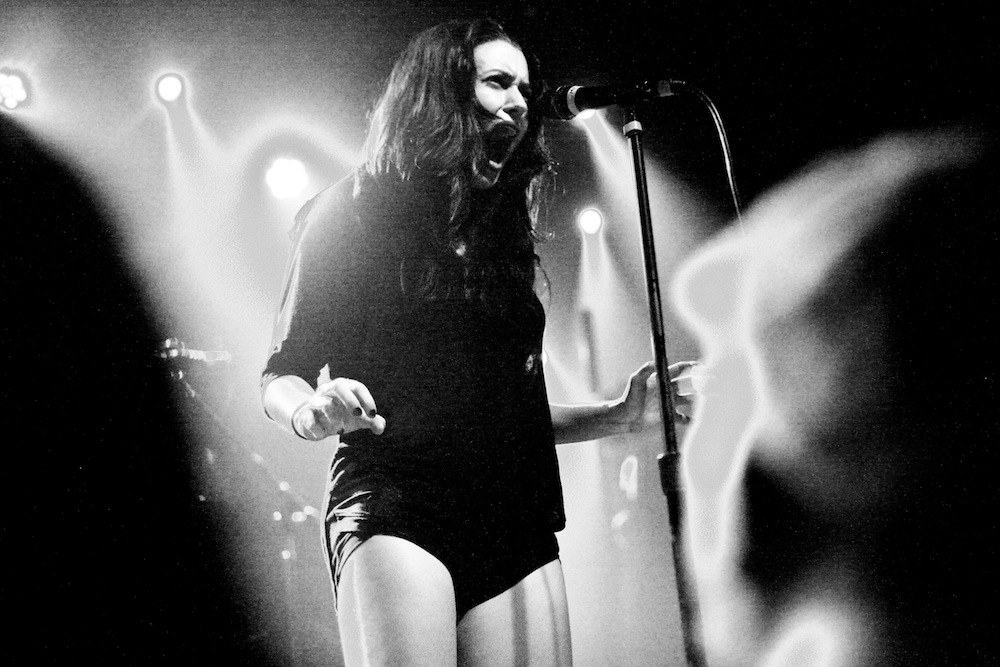 “I don’t wanna cry about it, I don’t wanna fight about it, I just gotta let go, I just gotta let go,” Myers sings on her usual set opener “Adelaide”. Were it not surrounded by words of enduring some sort of real abuse you might confuse those words as being from a radio-friendly Taylor Swift single. This bodes well for Myers’ future potential mainstream success as she’s proven capable of writing songs with broader appeal than wanting to murder someone you’ve been intimate with.

Like fellow budding young female songwriter Sharon Van Etten, a lot of Myers’ material was born out of a previous failed relationship. It feels odd to say this, but perhaps those assholes deserve a thank you from music fans for helping inspire such tragically beautiful music.

In fact, this asshole in particular broke up with Myers over the content of her music video for “Desire” according to the singer.

“I’d been on and off with him for awhile,” Myers explained.

“He could not handle it at all. He didn’t understand. We’d get into arguments all the time about it. I was always trying to defend it, that I was creating and it could be worse. Then when I shot the video for “Desire”, he broke up with me, it was the last straw.”

Fiona Apple had the raunchy video for “Criminal”, Myers has “Desire”. In the video, Myers loses much of what she is wearing while giving the camera her best “f*ck me” eyes (scroll down to watch the video).

Myers was also quick to explain it worked out for the best because she’s now with someone who understands things a lot better.

“Luckily, the guy that I am with now, it is the first relationship I’ve ever had where he does understand my creative side so much,” said Myers.

“He’s also really creative and I think that was really needed to have in a partner for me. I think still though there are probably moments where he hears lyrics and wonders if it is about him. There is still stuff I write that might sound bad sometimes. It’s just feelings that I have that I have to get out. He’s asked me what something is about before but he’s so understanding.”

Myers explains that music has always been an outlet for her to deal with things going on in her life.

“If I have some problems with my boyfriend right now and I get completely absorbed in it and him and start being crazy or jealous or something, I go to the studio and I start writing or I go play a show and all of a sudden, I let all of this out and I feel okay,” said Myers.

“I come back and I feel like it enables me to have more of a healthy relationship with someone because I can let out what I’m feeling in other ways. If I had no way to let that out, maybe there’s other healthy ways I could, but I need that creative outlet.”

Gents, a lesson learned. If your lady is acting too jealous or getting a bit crazy, just go out and get her an instrument to play. Who knows, maybe you’ll be the asshole we can thank if another Meg Myers emerges.

Be sure to check out Meg Myers as she is on the festival circuit playing Cincinnati’s Bunbury Festival on July 1 and Lollapalooza in Chicago on August 2. Her Make A Shadow EP saw a February release and is definitely worth grabbing. You can expect a full-length album either late this year or early 2015.