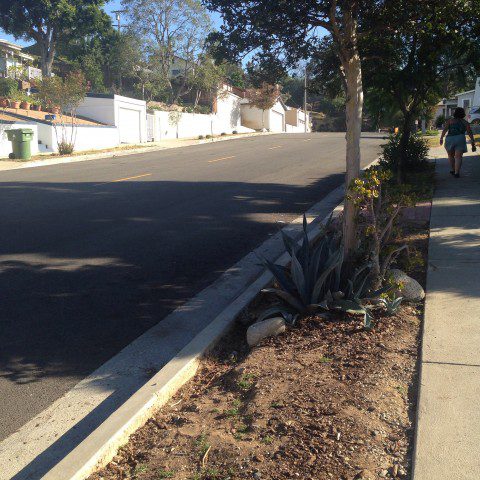 This is where my finance’s truck was parked before being towed.

There’s nothing like waking up on a beautiful Friday morning, to walk out and see that your car has been towed from your own home. Apparently our president, Barack Obama is in town today. And when I say “in town” I literally mean, he’s in OUR town today.

We live in the small town of Highland Park, Los Angeles. It’s a cool semi-suburban area of North East Los Angeles right next to nnyuth Pasadena. It’s not the usual parts of Los Angeles that Obama pays his visits, but apparently he used to live here when he attended Occidental college. Not to mention, his visit to our cozy area is due in part to his interview with comedian Marc Maron who runs his studio in his Highland Park garage. I take it Mr. Maron must live pretty close to our house because our neighborhood was noted as one of the “areas to avoid” from 8am-1pm, Friday, June 19.

My fiancé and I didn’t even know Obama was in town until late yesterday evening when we were surfing our Facbook feeds. Thanks to The Eastsider for giving us the heads up. We both had pretty busy mornings planned for Friday and were figuring the best routes to take to get in-and-out of our street.

It’a about 8 a.m. and my fiancé has a really busy day directing a concert for a certain pop star. He walks out the door to see that his truck is not where it should be. From our bedroom I hear him yell some words that I won’t repeat, and I immediately bolt for the door to see what’s up. Not only was our neighborhood noted as one of the “areas to avoid,” but apparently you can’t even park in front of your own home here. It looks like some “temporary towing” signs magically appeared overnight on our street, and in poor placement. And now there’s a bunch of LAPD police officers hanging out by our house. So Maron must like, be our neighbor. 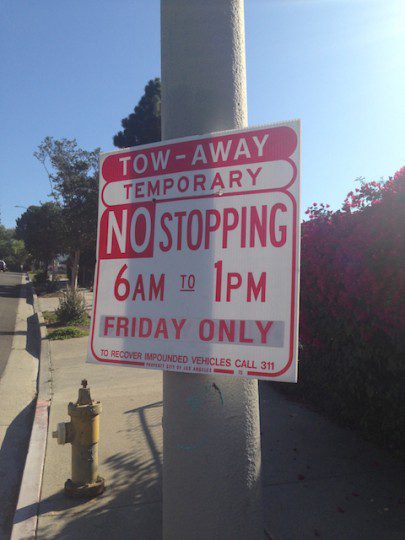 Obama, his secret service, Mayor Garcetti, the City of LA, the city of Highland Park—none of them had the decency to alert residents on my street that our cars could be potentially towed from in front of our own home. There was no notice on our door, no letter in our mailbox, there was nothing. They didn’t even have to say that Obama was in the area, they could have just sent us a letter explaining temporary towing due to an event or some other BS. Even the signage that magically appeared was posted poorly. There is no temporary towing sign in front of our house, nor our nose-y viejita neighbor to the left, or the family that lives to the right of us; there’s not even a sign in front of the house next to them! So how is it okay to tow our truck, along with a few other neighbors? It’s not.

By this time, my fiancé has resorted to plan B and is taking his vintage BMW R90 motorcycle to work (since his truck was towed). While he executes his extremely busy work day, I take the lead on locating his truck and getting more information about this mess. I spoke with a really nice police officer and told him about our problem. He basically told me the secret service can do whatever they want. If they want to post temporary towing signs without notice or even just tow your car even though there is no signage warning you, they can do it.

I get it; the president is in town and that calls for some insane security measures. I totally respect that, but shouldn’t the president and his posse respect those of us that actually live here? Having your car towed is already a stressful matter to deal with, but having your car towed without proper warning from in front of your own home, makes the blood boil. Ain’t nobody got time for that!

After calling a very inept 311 (as directed on the temporary towing sign down my street), I went through an obstacle course of tracking down the correct towing company. It will cost us $77.80 to get the truck out and then we have to pay another $210 in other fees (tow, city release, daily storage). That’s a pretty hefty price tag of almost $300 that could be used on groceries, paying our bills and what not. On top of the monetary headache, now my fiancé has to somehow find the time out of his super busy work day and get to Elysian Park from Burbank to pay these ridiculous fees, bring his car back to our home, and then taxi back to his theater and resume his work day.

Mayor Garcetti or Obama should be footing the bill on this. It would be the right thing to do for those of us that were towed from in front of our own homes without notice or proper signage.

UPDATE: So my fiancé got his truck out of the tow yard this afternoon, not only did he pay $277, but he was greeted by a $97 ticket on his dashboard. Thanks, City of Los Angeles.

12 thoughts on “Editor’s Rant: Highland Park residents wake up to their cars towed — Obama in town”