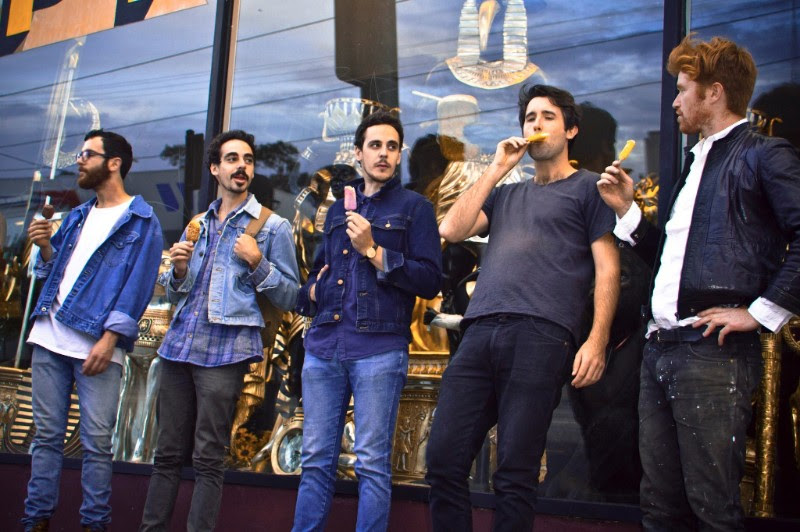 Coining themselves at a “tough pop/soft punk group”, Melbourne’s Rolling Blackouts Coastal Fever (RBCF) are turning on the Aussie charm with their enticing blend of garage rock. Just like Sly and the Family Stone, “it’s a family affair” when it comes to making music with these guys. Composed of of brothers Tom (guitar and vocals) and Joe R (bass), cousins Joe W (guitar and vocals) and Fran (guitar and vocals) and flatmate Marcel (drums), RBCF are gearing up to release their debut full-length record sometimes in the new year, but in the meantime you can give some of their new songs a spin.

With a sound that boasts the yesteryear flavors of Brit pop, RBCF’s latest song reveal “Clean Slate” also has an Americana sound with its jangly guitars. With vocals that are almost a spoken word as opposed to singing, makes the vocal style in “Clean Slate” reminiscent to the classic storytelling technique of Bob Dylan and Billy Bragg. Only difference here, RBCF’s lyrics aren’t quite as meaningful as the aforementioned greats; however, they’re definitely telling us a story that has some depth to their “clean slate”.

Influenced by classic 80s Australian guitar pop bands like Go Betweens and The Triffids, along with Orange Juice and Style Council who manufactured a sophisto-continental vibe despite being from gloomy Thatcher-era Britain, RBCF enjoy creating a similar irony with their music.

“We were listening to a lot of music made by people in cold places idealising hot places. Bands like Orange Juice and Style Council built this aesthetic of imagined continental sophistication.” explains Fran. “They’d paint a picture of black sunglasses, espresso and gelato – which was probably at odds with their actual experience in Glasgow or London.

Showcasing a ripe DIY sound, RBCF have a broad range of vibes. From the previously mentioned sounds of “Clean Slate” to the lo-fi daze that “Tender Neck” tends to put you in, RBCF aren’t just singing one tune. The boys even have a more fuzzed out song titled “Wide Eyes”. With a fun garage punk sound, fans of the Black Lips would dig this tune. RBCF have definitely kept it interesting with the three songs they have shared form their forthcoming debut LP. You can stream them all below.

While Rolling Blackouts Coastal Fever are playing locally in Melbourne, we hope these guys bring their infectious tunes over seas and to the city of angels real soon.