Despite its habit for brewing up freak wind and dust storms, Coachella Weekend One was kicked off to a head-rushing start despite an hour-long delay that left festival attendees stranded outside the main gates. Once those gates opened however, a constant stream of music lovers poured into the festival grounds to catch the first early afternoon acts slated to perform. On the Mojave Stage, British songstress Lapsley filled the massive tent with heart-wrenching croons and alt-R&B beats. Thriving on the intimacy of the shelter of the large tent, Lapsley powered through her short set with all the grace of a veteran performer. Standing immovable on the small stage, with every powerful vocal crescendo the young singer cast deep resemblances to the elegance of the likes of Adele and Lana Del Rey.

Los Angeles-based noise-rockers HEALTH followed up Lapsley’s soulful set with their brand of heady guitar anthems. The trio, fronted by Jake Duzsik, peddled out their haunting, synth-guitar powered explosions of rock for a small but raving crowd. Transforming the Mojave tent into a localized heavy metal meets possessed 80’s synthesizer, HEALTH was an entrancing picture of inane drum antics and fiery electrics. Bassist John Famiglietti, a wild blur of long black hair and fierce shredding, must’ve burned holes into his corner of the stage as he dropped to his knees and leaned dangerously off the stage towards the crowd during one of his solos.

Australian nu-disco outfit Miami Horror set the bar insanely high with their set at the Mojave stage, although vocalist/guitarist Josh Moriarty might’ve taken that attempt a little too seriously. In the middle of their dance party, Moriarty climbed up to the top of the stage’s metal rigging, standing atop a speaker and dancing to keyboardist Aaron Shanahan’s funky bass. In the middle of climbing back down, Moriarty decided to take a slight detour and ended up dangling from a light fixture before safely returning to the ground. As if Miami Horror’s dedication to their synth-pop grooves wasn’t already proven with that spectacle, there was not one moment of silence or down time the entire set. The band kept the music pumping the entire time, edging the crowd closer and closer to some climactic ecstasy. In finale, Shanahan jumped into the crowd and kneeled down, asking everyone to join him, he had nearby fans pounding his back like some human drum before jumping up in time for the onstage explosion of synthesizers and wild electric guitar riffs.

Beyond the tents at the Outdoor Stage, another Los Angeles native Lord Huron brought their indie-folk tales to a festival dominated by new wave EDM acts. As enchanting as the pseudo-spiritual stories he weaves, Ben Schneider brought the soul of 70’s singer-songwriters to Coachella as he did his best Bob Dylan impression, neck harmonica and all. Cutting through the deep electric rumblings of “World Ender,” at one point multi-instrumentalist Miguel Briseño began fiddling with a strange device called a theremin, producing melancholy electronic tones by simply motioning around it. “Fool For Love” was the highlight of their set, and as Schneider’s guitar strummed along to the song’s rollicking melody, the crowd that had gathered around the stage hummed back to him its tale of foolhardy love.

From folk to a brutal concussion of unapologetic rock, Alison Mosshart led her band The Kills in a highly combustible set that drew an ever increasing crowd as their inflamed percussion explosions and guitars rips filled the festival grounds. Her face shielded by her short blonde hair, Mosshart dominated the Outdoor Stage with all the force her hoarse cries and stomps could do short of bringing down the entire structure. Between harrowing riffs and wall-of-sound reverb, The Kills showed no mercy to any ears that were unaccustomed to the savagery of pure rock bombast. Picking up the guitar more than once, Mosshart showcased her chops to a crowd that roared their approval as her fingers thundered across its strings. At home on such a large stage, The Kills made it clear that their punkish-rock wasn’t just meant for the bar or garage and they could set fire to an evening festival slot with just as much ease.

Returning to the Mojave Stage one final time for the reunion of The Last Shadow Puppets, Alex Turner, Miles Kane, and Zach Dawes took the stage looking like cliché symbols of American rock-‘n’-roll. Turner with his greaser slick hair and yellow blazer, Kane in an unbuttoned floral shirt, and Dawes in a white tank-top and shouldering a star-spangled jacket complete with tassels—but the strange visual of seeing all three side-by-side onstage was only the half of it. In his usual suave swagger, Turner cast his spell on the crowd with his deeply lush murmurs and heavy love songs, while Kane held down guitar duties and offered a flurry of delicious hooks and solos. But beyond Turner’s ability to set the tone and have crowds eating out of his eccentric but overwhelmingly smooth hands (at one point picking up a beach ball that had ended up onstage and singing to it in an ironically un-ironic but moving moment), The Last Shadow Puppets have a chemistry that is so palpable that as a fan in the crowd you feel a part of the onstage antics and relationships.

Near the end of their set, as Turner and Kane shredded alongside one another, Kane pressed his face closer and closer to his friend’s lips in a humorous display of their bromance. The Mojave felt more like a crowded bar that you’d gathered at with close friends to listen to—not a super group—but a few heartbroken average Joes sing about love. Moody and blissfully honest, Turner (serenading and pointing at specific individuals in the crowd, eliciting fainting screams from the women and envy from the men) and company cut a swathe of heartbreak and unadulterated passion through the tent.

As another “super group” in the form of Diplo and Skrillex’s collaboration, Jack U, lit their bonfire of salute to EDM’s bass-thumping pop hits, LCD Soundsystem took to the Main Stage. The cultural divide between both the Outdoor and Coachella stage was stark and a brutally honest representation of the festival’s shifting musical tastes—Jack U’s crowd was so large that it threatened to bleed into LCD’s area. But while Diplo and Skrillex were furiously hammering their collection of remixes of borrowed tunes (the sound of Major Lazer’s hit “Lean On,” who is also playing the festival, echoing across the field was a particularly cringe-worthy moment), James Murphy led his reunited pioneers to a different kind of show. For nearly two-hours, Murphy poured out the hits, talking little except to thank the crowd, awkwardly introduce band mates, and say he isn’t allowed to talk too much. Hit after hit, from the revolutionary grooves of “I Can Change,” which pushed the crowd into an early frenzy with its cathartic confessions, to the sublime xylophone clinging and rushing synths of “Someone Great,” LCD shoved us in a time machine and sent us back to the early 2000’s.

In a night full of goose-bump inducing and poignant moments, the quiet assertions of self-importance in “Losing My Edge” struck a deep chord in terms of music’s cultural divide. “I hear that you and your band have sold your guitars and bought turntables,” Murphy sang to a crowd that screamed back their approval of his sentiments, bringing to life the song’s quiet nostalgia that rings with as much truth now as it did back in 2005. The draw of LCD has not been solely their re-imagining of the relationships between rock and early dance music, but also the cultural awareness of their songs often witty lyrcicisms; to say seeing it come to life on the Coachella main stage was breathtaking is an understatement. Avant-garde, legendary, iconic, these are empty adjectives when placed next to the twittering percussions and sweltering harmonies of “Dance Yrself Clean, “and they certainly fall short of describing Murphy and company’s tribute to David Bowie with a cover of “Heroes.” Tears fell, bodies were shaken with uncontrollable love, by the time the glittering gallop of “All My Friends” piano medley began surging across the festival, it was already too late. I was almost one in the morning and much of the crowd had already trickled out, but enough remained to relay Murphy’s self-depreciating hopes. As Nancy Whang’s fingers danced dizzily on her keyboard and Murphy railed against the song’s sad inquisition (“Where are your friends tonight?”) the message seemed clear: if you have to go out, to do it burning brightly at the Empire Polo Fields. 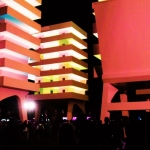 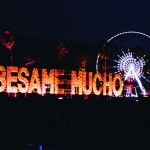 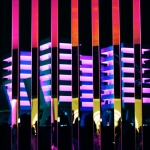 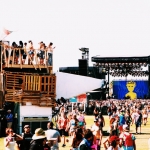 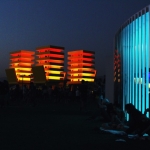 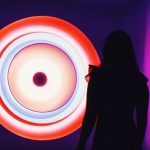 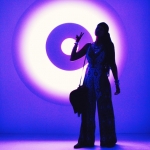 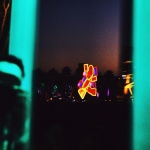 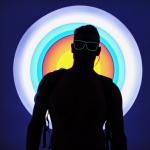 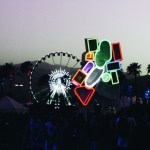 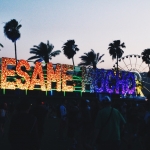 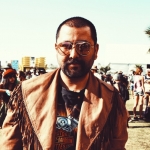 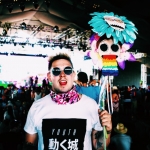