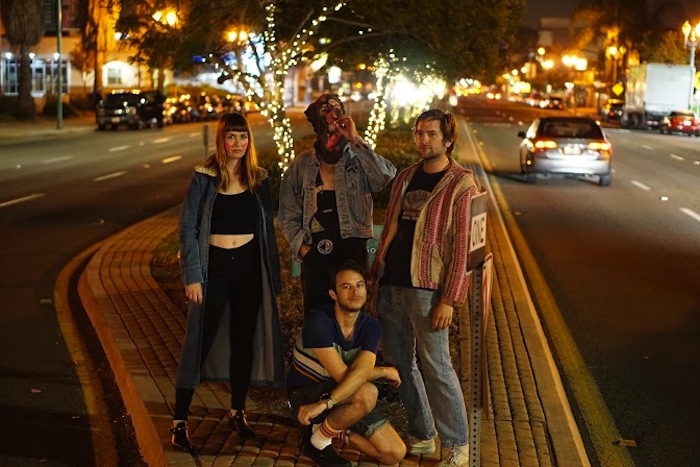 San Diego’s Big Bloom are about to be in full rock n’ roll bloom with the upcoming release of their debut LP Heavy Angel, due out July 7. We here at Grimy Goods are thrilled to premiere the release of their first single off this heavy hitter titled “Punk Song.” According to vocalist Katie Howard, “The essence of ‘Punk Song’ is revenge and recklessness, adult angst in a city full of egos.” Howard’s mighty vocals guide you through this roaring garage punk journey, where every word is stretched as far as it can go, and no lyric is left unturned. Guitarist Alex Packard and drummer Sean Daly team up to create a rhythmic driving force that wills your limbs to loosen and sway, whilst bassist Grant Gilbert provides a backing groove that gives the song real shape. A sprinkling of Space Invaders-like electronic effects add some otherworldly, sci-fi psychedelic appeal. After thoroughly enjoying the “Punk Song” listening experience we had to touch base with Howard and Packard to learn more about working on their debut LP Heavy Angel, personal punk rock experiences, playing in unusual locations, and more. Read on!

“Punk Song” is a great jumping off point for diving into Heavy Angel, which features songs that rip with pure fury (“Step Up To My Face,” “If You Were Cool”) and some tunes that burn slowly, dwelling in deeper, introspective territory (“Heavy Angel,” “Venus,” “Slow Ride”). It’s the kind of album that shakes things up and Howard has high hopes for the experience fans will take away after listening to the album:

“We hope that people connect to the music and have fun with it, that it makes them thrash their head a little at a red light on an otherwise ordinary day.”

On the writing/recording process for Heavy Angel, Packard shares that it “was very easy and fluid. Our writing process has been the same since we started the band.” The only new element in the mix this time? Drummer Sean Daly, “who brought much needed energy to the songs on drums. He also recorded and mastered most of the album for free so yeah…clutch. I have to plug his recording project because it is the shit, get free downloads here and check out his dope ass videos here.”

Because “Punk Song” got me amped up and contemplating punk rock’s great influence in my own life, I had to know what punk rock artists and experiences were memorable for the band, to which Packard divulged:

“Right now I have three bands in rotation while driving: The Misfits, White Zombie (Soul-Crusher) and Motörhead. Is that punk? Anyway, I drive way too fast now…Recently Sean and I saw Agent Orange at Soda Bar in San Diego. The place was packed with all kinds of punks from gutter to the ol’ timers. At one point during the set some girl jumps on stage, takes her panties off under her skirt and hangs them on Mike Palm’s mic while planting a kiss on his cheek. Palm looked more annoyed than flattered, and at the end of the song just tossed the undies to the side of the stage. That struck me as very punk rock…That night ended with a big fight out in the street, that Sean and I successfully sidestepped. Great show.”

When it comes to wild and crazy show experiences, while they may not have gone say as far as performing inside an active volcano such as Chino Moreno’s (Deftones) recent excursion in Iceland, Big Bloom is no stranger to taking a chance on playing in an unconventional location, more specifically, a junkyard in Tijuana. Howard revealed that it was a shockingly fun experience. “Playing in the TJ junkyard was pretty fun and something that couldn’t be replicated, it was real. There were old films being projected on the all above the stage, and the makeshift stage was surrounded by items found in the junk yard like old cars, ladders, lights, scraps and trash. There was a pig being roasted and served, girls serving $1 shots with pickle back chasers. We’d like to play in more unusual environments soon.”

After hearing that, we expect only bigger and better things from Big Bloom as they begin to truly flourish, and turns out they’ve already got several cool things in the works. After releasing a badass wild n’ weird house party video for title track “Heavy Angel” (watch below) the band is brewing up a music video concept for “Punk Song” with local artist Xavier Vasquez, who does production work and film. A late Summer release is planned and Howard hints, “We’d like the next video to be more carefully curated, lo-fi and creepy.” The band is also slated to play the Maui Sugar Mill in Los Angeles on August 13th with Electric Children with New York show dates this Fall. Stay tuned to their website for details. 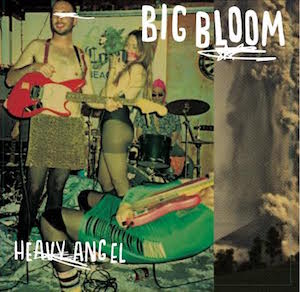 Head down to San Diego on July 7 to catch Big Bloom’s album release show at The Casbah, presented by ListenSD. $5 albums will be available the night of the show and supporting acts Splavendar and The Bad Vibes get the party started. Projections by Xavier Vasquez. Get Tickets!