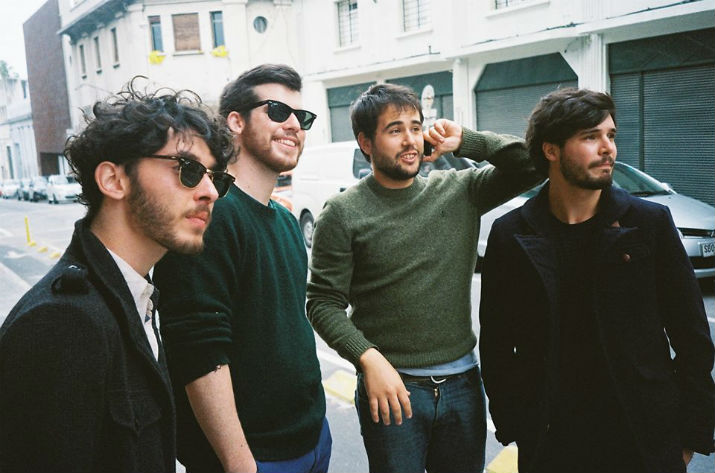 Uruguay’s Delouners have already been making waves in Montevideo, “the capital of South American rock,” but their catchy blues garage sound is just beginning to set off ripples here in Los Angeles. The band recently released a new video for the single, “Family,” which also happens to be the title of their debut 13-song album. You can listen to it in full via their Bandcamp page.

The video for “Family” draws from fast-paced vintage stock footage (circa 1949 and 1973), but the lyrics zero in intently on the protagonist’s look at the woes of their micro-family, featuring a tough grandpa, heavy drinking uncle, and grandmother who: “when she was a young girl she would dance to merry tunes / Well now, God knows when in life she got all sucked up by the blues.” It struck me as curious at first to hear English lyrics instead of Spanish, for a band hailing from Montevideo, but as guitarist/vocalist Patricio Clavijo revealed, “When you make rock music, writing in English is easier than doing it in Spanish. That is why some songs and riffs are meant from the beginning to be written in English (as is done in “Family”) like our songs “Mirtha Legrand” and “Sea Side.”

However, the band does also hit the nail on the head with their Spanish songs such as the fuzzy, limb shakin’ “Los Dormidos” and the deep-seated, murky groove of “Alain Delon.” Per Clavijo, the city of Montevideo itself also influences their sound: “The city has an exotic, gloomy beauty, with old buildings and an overwhelming Atlantic Ocean. Many rock bands come out of that environment and the Montevideo rock scene has a lot of emerging rock bands like Santé les Amis, Oso Polar, Hablan por la Espalda and Vincent Vega, among others.”

Clavijo further divulged on Delouners’ first attraction to blues rock and how that figured into their sound.

“Delouners started rehearing in a garage with cheap music gear. That fact somehow induced the band to have a heavy blues, psych and garage sound. As listeners and musicians, we like it.”

Family was also the first time the band recorded an album which had them anxious, but ultimately they ended up with a prized end product. “The (recording) process was unique because an old tape recorder from the ’70s was used and that provided a whole different sound.” This serves as a reminder that you don’t always need the most high tech equipment or expensive gear in order to achieve a healthy rock ‘n’ roll sound.

All in all, the band hopes listeners come away from the Family experience with “some fun psychedelic rock riffs, a pleasant mind trip, and an actual vintage sound.” I recommend kicking back on your bed, couch, hammock or wherever you like to hunker down and listen to music, and let Delouners take you on a musical trip through Montevideo.

Delouners will technically be on hiatus until 2017 but they’ve got plenty of goodies lined up to keep your garage rock palette satisfied until then. The band have two new soon-to-be-released music videos, a short band documentary, fresh songs, and a forthcoming sophomore album due out in 2017.

While Delouners don’t have any currently scheduled Los Angeles shows, stay tuned to guitarist Patricio Clavijo on Twitter for updates on upcoming solo gigs in Los Angeles this Summer/Fall.

Watch Delouners’ video for “Family” below.