With little fanfare or hurrah, FYF 2016 began without a hitch and under blissfully temperate weather for a Los Angeles summer. No longer contained within the small confines of Exposition Park, the festival has made its home around the Los Angeles Memorial Coliseum quite cozily, utilizing the structures’ bathrooms (no porta-potties, hurray!) and elliptical map for an easy to grasp understanding of the festival’s layout. Packed to the brim with dozens of food vendors, strategically placed beer gardens, and the best VIP area of all time at the Main (henceforth referred to as the Fuck Yeah stage, because duh) stage, FYF rolled out all the stops to ensure its attendees could receive all the necessities that are food and beer.

Bringing his densely packed, lo-fi collection (all the way from his Philadelphia bedroom), multi-instrumentalist Alex G perked early interest at the Trees stage as the first FYF attendees made their way around the Los Angeles Memorial Coliseum. Tucked between a small field of trees and further hidden under the stage’s half-dome ceiling, Alex and his bandmates wasted no time in subduing the already heat-weary crowd with their waxing, melancholic tales. For all the singer/songwriter’s meticulous resemblance towards your typical droning, reverb-heavy fuzziness that stoner’s seem to find themselves drawn to like flies to a light–Alex’s delightful distortions nearly betrayed his songs’ own tense introspections. Tackling everything from mental illness to unrequited loves, Alex’s jagged confessionals are a telling reveal (even when his onstage antics, like telling the crowd how sexy he and his band must look, are borderline adolescent) of his yearning struggle to put into coherence the complex emotions bouncing around somewhere beneath all those wryly fogged-up layers that make up his genre-jumping tracks.

Swedish trio Peter Bjorn and John followed-up Alex G’s lo-fi submission with a heady dose of saccharine-tinged, indie-pop, drawing heavily from their most recent release Breakin’ Point. Playing the part of the “quirky Swedes totally stoked to be in LA,” Bjorn and John, the group’s most vocal members, expressed their sentiment pretty much after every song with prolonged, wonderfully awkward introductions to their background. Relying mostly on the propelled intensity of their synth-backed tunes, the trio did more than just ride the wave of nostalgia the crowd might’ve held for old favorites like “Young Folks” and “Amsterdam.” Instead, Peter (whose Ben Gibbard stylized hairdo and uncontainable glee had us wanting to shove him in our pockets and take him home with us) kept the crowd going throughout their set by jumping into the crowd igniting a dance party during “What Are You Talking About?”

Over at the Fuck Yeah stage (aka the Main stage, because apparently even stage-namers get days off), Vince Staples was tugging on his North Long Beach roots for the benefit of every person losing their shit in the VIP and General Admission pits. Bringing his grimy, urban-strained rhymes to the depths of Los Angeles’ hip-hop scene (the shadow of Kendrick’s headline slot weighed heavy on the stage), Staples drilled the hype of his sharp-toothed mantras into the crowd: “Hey, I’m just a nigga until I fill my pockets/And then I’m Mr. Nigga, they follow me while shoppin.’” The only thing that threatened to overwhelm the hysteria from Staples’ energized lyricisms was the poignant visuals that were thrown up behind him onto the main stage video screens; scenes from Vanilla Sky, which played appropriately during “Jump Off the Roof,” and others from Ghost (Patrick Swayze nearly stole the show, we were swooning) and American Beauty (oh yes, it was the flower petal scene, complete with a half-naked Mena Suvari).

Grimes is a badass–that’s all you really need to know. If you must know more, then know that midway during “Oblivion,” Claire-fucking-Boucher told the crowd she was having “technical difficulties”–aka, her pedal machine and ability to use pre-recorded samples had been cut-out. So Grimes did what she did best, improvising and playing the entirety of the song’s samples on muscle memory alone, not to mention pushing through “World Princess Part II” with the same issues. The first half of her set was a flurry of special guest appearances that included Asian rapper Aristophanes spitting her fiery foreign rhymes on “Scream,” while the common theme throughout her set was pretty clear: Grimes is badass; but her backup dancers are even more so. Accompanied by the same pair who have joined her throughout her tour, Grimes, and her musical partner Hana, tore up her jittery, synth-pop anthems with an almost frightening gusto. Ever the entertainer, Grimes used her signature shock tactics–roaring into her microphone and screaming in voice-cracking yelps while rolling around on the stage floor–to pull the crowd out of any pretense they might’ve had for being shy. On her more pop infused tunes, like “Flesh Without Blood,” and the Godfather inspired track “Kill v. Maim,” which the 28-year-old ended her set with in a head-numbing, insanity ridden finale. As the sole creative fire behind Grimes, Boucher has struggled profoundly in an industry that seeks to categorize, define, and in the process, belittle her efforts to produce meaningful art that entertains and inspires. Her ingenuity and experimentalism is beyond apparent, but live, behind her keyboards and guitars, Grimes remains a solely unique act that harkens back to a time when that word actually meant something.

French synth wizards Air took the Lawn stage to whole other dimension late into the night with their lush, mind-bending soundscapes. The duo, which consists of Nicolas Godin and Jean-Benoît Dunckel, took fans by the hand as they led the massive crowd through the swirling contusions of lights and lasers that jutted from the stage’s fixtures. More than otherworldly, Air’s sets feel deliberately foreign, not in terms of nationality or citizenship, but sound and color. Their sonic worlds are disorienting at times, even benignly austere, but Air has built a devoted following over the years with their slow-burners, and FYF was no different.

“Groovy as fuck,” this is what you would’ve heard entering the area surrounding the Fuck Yeah stage in the aftermath of Tame Impala’s set, but such is the understatement of the flamboyant psychedelia that surrounds the enigma that is Kevin Parker. While dutifully overwhelming as per usual with their swirling fantasias of technicolor light shows, Tame Impala found its crowd-subduing qualities amidst the sheer prowess of their reverberating sonics, which thundered wildly across the massive crowd shockwave after shockwave. Opening with crowd favorites like “The Less I Know The Better” and “Let It Happen,” Parker and company steam-rolled over the mile-long crowd with their dreamy soundscapes, pulsating forward on the sheer force of their heart-pounding percussiveness alone. For better or worse, Parker has crowned himself the psychedelic guru of an entirely new generation, but the singer’s sincerities remain intact and his stage presence is astral to say the least. Like the static transmissions from another planetary plane, Parker’s words drift in on some spacey, estranged signal, echoing that same introversion that many of his listeners have always related to.

Alt-R&B and pop princess Kelela sounded like a counterfeit Jhene Aiko–and while her inspirations list acts like Little Dragon, the singer/songwriter aspect seems to get lost in translation amidst her pop heavy ballads. Dressed in an all white leotard, Kelela managed to dazzle the crowd with the help of the Trees’ stage beaming lights and her somewhat ethereal stage presence kept the crowd dazed just enough to make the reality of their decision to miss out on Tame Impala almost justifiable.

Sheer Mag play like they’ve been playing bars most of their career–and with the knowledge that they’ve been doing just that in mind, it’s understandable that their heavy-handed, metal sound might be crudely shaped for one of their first festival appearances. Channeling their post-punk ethos, Sheer almost echoes a strange parallel with country-folk singers Alabama Shakes–while not demonstrating the same veteran skills as their Alabama counterparts, lead singer Tina Halladay’s sharp vocal dives were enough to momentarily redeem the band’s sonic inexperience. Shredding the skin off their fingers, echoing brash similarities between Blondie and Heart, Halladay ripped through her band’s set like she was on some sort of timer.

King Kunta was poised to close out day one of FYF with a fiery explosion of beefy rhymes and cut-teeth verses long before he took the stage. With an explosion of fire Kendrick Lamar ingrained himself in a bombastic reminder to South L.A. his Compton, rags-to-dope-rhymes story. Embodying all the critical dichotomy of his hometown’s vices, Lamar has always spun a critically satirical tone on the superficial afflictions of today whether it’s during his performance of “Swimming Pools,” or the critical-of-critics hit “King Kunta,” which combines Lamar’s excessive love for outward genres like jazz and R&B with the funky nature of his off-kilter hip-hop. A pro elicitor of crowd dynamics, Lamar kept the crowd hooked from start to finish, pushing them into a wild frenzy of flailing arms and garbled (between a thousand joints of weed) rap lyrics that incoherently sprang themselves across the massive crowd that had formed at Lamar’s feet–yet the rapper seemed to relish in the attention, as he ordered fans around during every song, edging them closer and closer towards his explosive finale of pyrotechnic design.

My first encounter with Explosions in the Sky came in the form of second hand praise from a friend during an M83 show, who compared the two’s orchestral make-up and penchant for soul-surging crescendos, and called them one of the best shows he’d ever been to. With this elevation of hype in my mind, I found myself back at the Trees standing in a small crowd huddled together against the L.A.’s midnight breezes. As expected, Explosions started off small, rumbling forward on carefully strummed guitars and bass (eliciting the soothing hums at one point with a violin bow). When the drop finally came, Michael James, Munaf Rayani, Mark Smith lunged forward with their guitars, swinging their heads in unison as a demolition derby of percussive force thundered out from the Trees stage and swept up those lying on the lawn. From afar they lived up to their namesake, sending burst after brilliant burst into the night sky as their goose-bump shattering instrumentals carried you to some far-flung glory.

Explosions In The Sky at FYF 2016 in Exposition Park, Los Angeles 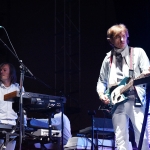 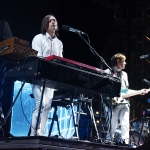 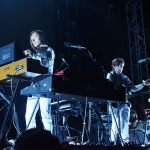 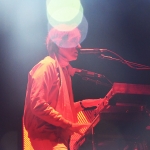 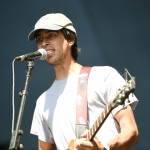 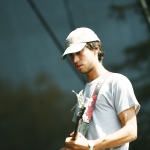 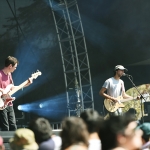 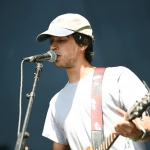 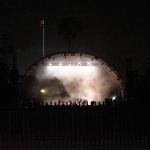 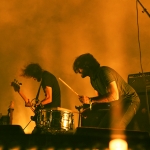 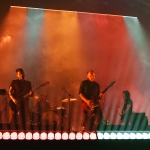 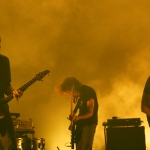 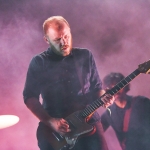 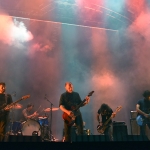 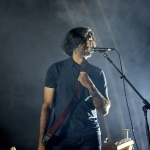 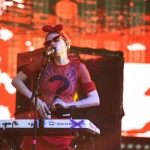 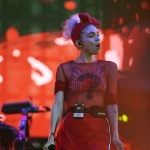 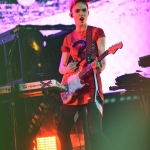 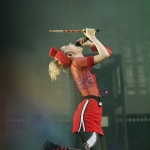 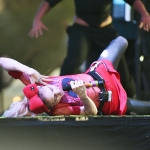