Tents in the desert get warm when the sun rises. Stiflingly so. I awoke Saturday to the convecting heat of the tent, a minor bit of dehydration from the previous evening’s activities, and Wes the photographer’s conversation with our tent neighbor, a guy who worked for the festival parking crew that would also be attending the show that evening. People like Wes and I usually ask others what band they are most interested in seeing that day. If enough people name a band that you are unfamiliar with, you check that band out. This time it backfired as Wes was now stuck listening to an impassioned diatribe about why electronic and pop dance music was superior to the music playing at Desert Daze and then began playing dance music on his phone to hammer home this point. The guy continued to describe a semi-mathematical equation to back up his preference. Roughly, it proposed that all women like to move their bodies, and he too liked to move his body. Dance music makes you move your body. He loves women, so he loves dance music. The premises were a bit more convoluted, but I’ve distilled the essence of the argument and likely missed no nuances. Naturally, Wes made eye contact with me, giving me the look of an ensnared animal desperate for escape. Not wishing to have the same fate, I gave Wes a quick grin, grabbed a beverage, and went off to check out the grounds a bit.

Tents stretched out across the camping grounds, some clustered, others nestled next to cacti and Joshua trees. Some people tried their best to sleep, others socialized. One lone traveler, acoustic guitar in his lap, did his best rendition of a Neil Young song in hopes of gathering listeners and making acquaintances. It was to no avail. He would have had a better chance with songs like that at Desert Trip, I thought to myself as I walked towards the common area. Along the trees that separated the parking lot from the camping grounds there were recycling receptacles, a water station for potable water, a general store, a coffee shop replete with a generously long line, and a few tents for yoga, massage, and reiki. My mission from this point was to find a media tent with Wi-Fi to send out these reviews and the showers to ensure that I wouldn’t smell like hot, wet garbage by the time Desert Daze was over. The media tent was nonexistent; c’set la vie. When I found the showers, the line was long. I noticed that a few people had found a garden hose nearby to wash themselves and forwent the $5 shower charge. Afterwards, I found Wes and we charged our phones and planned our day.

We started at the Moon Stage to catch L.A. Witch. I had to admit that I was worried for the band when they took the stage. Roughly two dozen fans were waiting on them in the hot sun. Within a few bars of their opening song “Kill My Baby Tonight” the crowd swelled to a few hundred and grew quite large mostly filling the area as the set went on. The trio captivated the crowd with songs that sounded like listening to psychedelic Appalachian blues played through a reverb pedal. It was slow, sweet, heavy, and menacing. I had never heard of them before, and they were one of the first bands that I checked out when I returned home.

Strangely, as I moved away from the stage to observe the crowd, I noticed a girl in shorts rocking out to L.A. Witch with a four foot Styrofoam carrot on a six foot stick that was lit with Christmas lights. She gyrated rhythmically to the music as another girl joined her. The original girl passed the carrot like a baton to the new girl who enjoyed the carrot dancing for a song or two before deciding that carrot dancing was simply too great a responsibility and returned the carrot stick. Like dancing panda girl, the carrot stick would be seen throughout the festival.

After hearing several recommendations and having a dim recollection that Dan Auerbach of the Black Keys produced their first album, I headed off to see Radio Moscow. This trio of rockers headed by Parker Griggs was loud and tight. Each member expertly melted the faces off their audience with a sound that can be best described as members of Black Sabbath and Cream growing up in the American South and starting a garage band with amplifiers that only go to eleven. Two grown men dressed in diapers and fanny packs grooved next to each other, kicking up desert sand in stoner rock ecstasy as the band played “Broke Down.”

Next up was the third trio of the day, The Coathangers. I’ve heard that this band started off as a joke, and if you listen to their first album, you might believe it. If you see them live, however, you’ll quickly learn that these ladies are no joke. Dressed in matching sleeveless tanks with “The Coathangers” scrawled in black sharpies, the band launched into a barrage of no nonsense punk. Ok, maybe a little nonsense. “Squeeki Tiki” features a bass, the drums, and a squeaky toy. Make no mistake though, The Coathangers rock hard. The guitarist (Julia Kugel) and drummer (Stephanie Luke) take turns with lead vocals. Luke’s voice is roaring and guttural and almost makes Kugel’s straight ahead punk voice seem sweet by comparison. Quite the pit developed during their show as people enjoyed their catchy, hard rocking songs. The band seems to like to have a bit of fun, too. Towards the end of their set, every member had played drums at least once.

Thee Oh Sees were up next, and when I left my spot on the on the pit rail to grab some food in between sets, a lady almost knocked me over to get my spot. I knew Thee Oh Sees were popular, but I hadn’t expected that. When we returned to catch the band, the Moon Stage had swelled to capacity with the largest crowd of the day. As the band played “Toe Cutter – Thumb Buster,” guitarist John Dwyer leveled his guitar like a rifle and shot chords through his amplifier. The San Franciscan/Los Angeles band had several crowd surfers and yes, a dancing girl in a panda suit. Achieving her first shout out of the festival, Dwyer reminded the crowd, “No one hurt the Panda. They are protected species,” and then launched into another song.

I was tempted to catch another band after Thee Oh Sees, but there was no way that I was giving up my spot to see The Black Angels. It is the tenth anniversary of their album Passover, and they were going to play the album live in its entirety. I’m not sure what band could have dragged me away. The sun had long set and the moon was on the rise as the stage, lit in red, saw the entrance of The Black Angels. And in seconds the opening notes of “Young Dead Men” rang out through the crowd as the crowd responded in kind with a roar. True to their word, the band marched all the way to “Call to Arms” finishing off all ten songs from Passover before playing a few more songs from more recent albums.

As much as I would have liked to remain in the moment after The Black Angels’ set, I rushed to the Block Stage with two new acquaintances to catch another act that I had been eagerly anticipating, The Raveonettes. The Raveonettes started just as we arrived and white strobes illuminated the dozens flowing swaths of canvas hanging from the rafters of the stage. Fuzz erupted through the amplifiers as Sune Rose Wagner and Sharin Foo strummed their guitars. I’ve been a fan of The Raveonettes for years, but as luck would have it, I’ve never gotten the chance to see them live until now. First off, they sound amazing, but they don’t move much. As a result, I think an audience that might not know their music very well might respond in kind. It was a shame, they sounded great. Awash in sonic noise, one of my new friends asked if I had ever heard the Norwegian duo’s cover of The Stone Roses “I Wanna Be Adored.” I hadn’t, and when I admitted that I hated myself for missing The Stone Roses at Coachella a few years ago, I was given a bit of insider information about an impending tour. And just when I had given up hope of The Raveonettes playing any songs from my favorite album, they closed with my favorite song from the album, “Aly, Walk With Me.”

I meandered back to see Primus after I bid my new friends goodnight. As I walked towards the Moon Stage, I noticed two gigantic inflatable astronauts flanking each side of the stage as sonic weirdness screamed through the speakers. Les Claypool is arguably one of the most innovative bassists to ever play the instrument. And his music isn’t for everyone. Damn if he isn’t captivating. I know only five of his songs, and one got me an A in high school as I bullshitted my way out of not finishing a project, so I feel like I owed the man my complete attention. I watched in awe as he played songs that I didn’t know. How could he and his drummer anticipate each other’s timing so well? Sometime later, Claypool left the stage and returned in a pig mask and a stand-up bass stripped of its body. After moving his fingers and bow across the strings for a few moments, Primus began playing “Mr. Krinkle” and it played like the theme of a horror film with Les in his mask. With the song over and the pig mask off, Claypool told the audience that Primus was a “new band on the scene” and that they were “trying to break in.” After a while he dropped the charade and said that he was about to play the song that made him so famous that he “gets recognized in hardware stores” and allowed him to “grab any woman by the vagina.” The latter statement being a joking admonishment to the newly released Billy Bush and Donald Trump tape where Trump made a similar claim. With that, Primus played “Jerry Was a Race Car Driver,” and the crowd went berserk and didn’t stop until the last note of “My Name is Mud.” And with that the earworm was embedded. “My name is Mud- bedum dum dum dum bedum dump….. Dammit.”

When the dust literally settled, Wes and I headed to the last show of the night, Godspeed You! Black Emperor. As we walked to see the band that took their name from a Japanese documentary with the same title, I heard a few guys talking. “Should we see Godspeed the Emperor?” said one of them. The other replied, “Yeah, they flew all the way from their home in Europe to play for us.” Godspeed You! Black Emperor, a band from Montreal, Canada, were on the stage playing an instrumental song that lasted twenty minutes when we arrived. The next song was one that I recognized, but when every song is an instrumental, it gets hard for someone who isn’t a rabid fan to know them by name. Wes and I looked at each other an hour into the set and decided it was time to grab some food. As we walked off, I found myself hoping that those guys appreciated the “European” band that they were still watching. And I tried desperately to get “My Name is Mud” out of my head. I wouldn’t be successful. 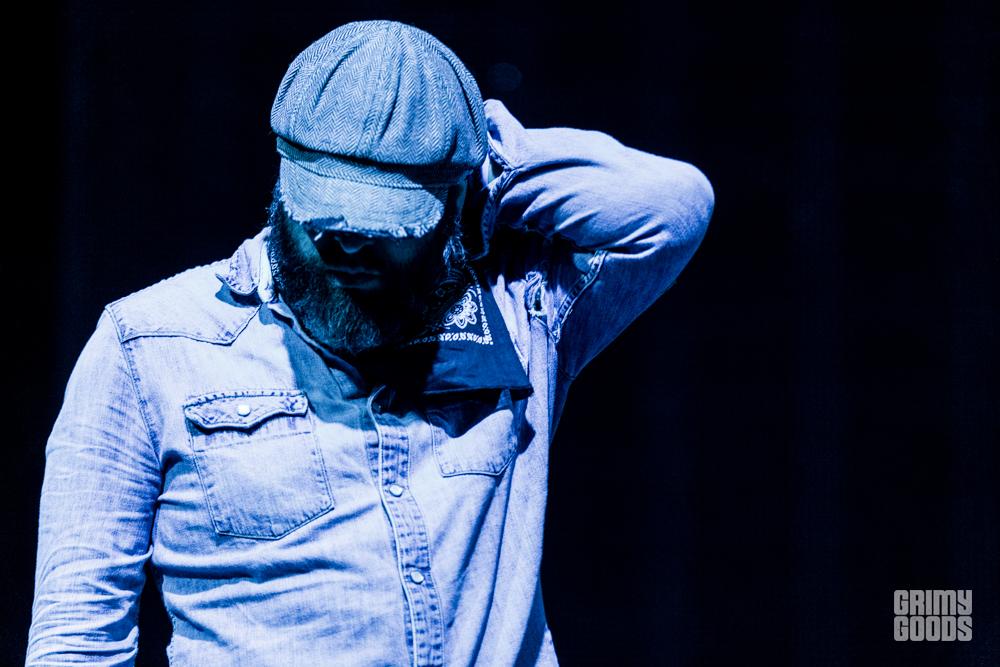 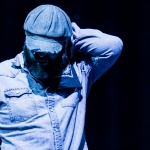 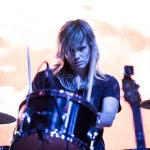 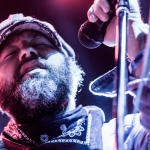 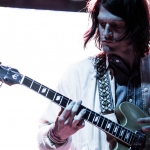 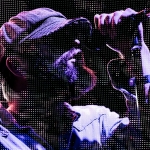 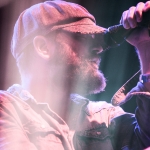 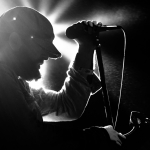 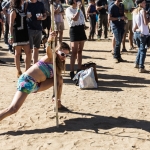 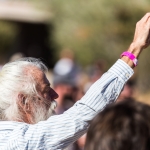 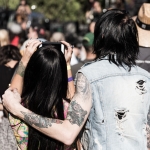 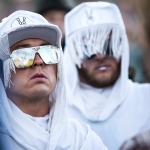 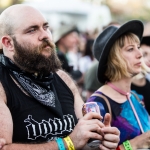 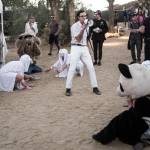 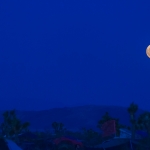 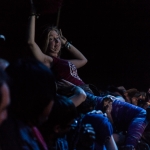 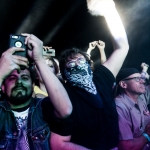 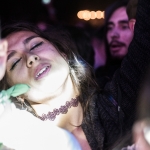 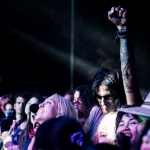 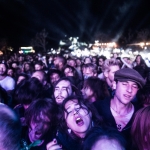 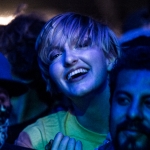 Check out photos from Desert Daze day one!