I awoke on the last day of Desert Daze to several tent neighbors complaining about the night before. Eager to hear the subject matter, I realized that my light bout of tinnitus and proximity were going to make deciphering the conversation difficult. Dedicated to getting the scoop, I stalked my prey like wildebeests on the Serengeti by washing my hair with a bottle of water and some shampoo over a bush near their tent. Two birds, one stone. I didn’t catch their names, so let’s call them Lady Patchouli and the Hacky Sack Kid. Hacky said, “That Primus crowd was weird. And rude. They freaked us out. We didn’t even stay for one song. Lady responded, “Yeah, I thought they might kill us, pick my bones, and eat me alive.” I enjoy hyperbole as much as the next person, but with my hair clean and the bush watered, it was time to get the day started. But damn it if “My Name is Mud” didn’t get stuck in my head again…

It is often reported that guitarist Lindsey Troy and drummer Julie Edwards met in a knitting or crochet class before forming Deap Vally. The story clearly must have been made up. Surely they met in a Whiskey Aficionado class or Explosive Making 101: Dynamite and Fireworks for Everyday Usage. The band played a 45-minute set with a good mixture of older favorites and songs from their new album, Femejism. The last time I saw Deap Vally was with Wes when we covered their show at Basic Flowers in downtown L.A. I bring this up because Julie Edwards was eight months pregnant at that show, and about a year later, her little hitchhiker was rocking a camo onesie, noise cancelling ear muffs, and cheering mommy on from the photo pit. The baby wasn’t the only special guest, either. Along with a friend of the band adding percussion, several familiar mascots joined Deap Vally on stage for a few songs. If you’ve been reading the other days’ coverage of Desert Daze, you’ll have certainly surmised that Panda girl was among the many on stage that danced as the band rocked.

Many walked from the Deap Vally set to the Moon Stage and waded into a hazy drone of music equally dreary and dissonant as Jennylee gripped a bass, bellowing a song that ended before I could place it. After putting the bass down, the music took a turn to something a bit more rhythmic but kept its darkness. With her microphone as dance partner, she swayed and sang “Boom Boom.” Half of her songs were sort of dark wave and the others more post punk, particularly “Never” and “Riot.” Jennylee kept a veneer of intensity as her bandmates seemed to be having a bit more fun playing the music. She broke the character singing the songs and cracked a few smiles at her guitarist and bassist occasionally even when singing, “I’m gonna get her. I’m gonna turn her inside out. I’m not playing around. Better watch out” during the song “Bully.” It was entertaining to watch someone enjoy themselves so much while singing unhappy songs.

METZ took the stage with a crash and a roar. Almost on cue, moments into their set, the desert winds kicked up. The wind could not muster the ferocity and intensity of METZ or the mosh pit that they created. The sun began to set behind the mountains, and still METZ did not let up. If they have a song that was less than a hundred miles per hour, they didn’t bother playing it. If high energy, hardcore punk is your jam, do yourself a favor, and check METZ out.

While I’d have loved to finished the METZ set, there was a tribute to Suicide frontman, Alan Vega. Suicide was set to play Desert Daze 2016 until Vega died on July 16, 2016. Many were saddened by his passing and were looking forward to the first Suicide performance in California in many, many years. Though Suicide’s performance at Desert Daze wasn’t meant to be, it was fitting there would be a tribute where their songs could be heard. When we reached the Wright Tent, the sound problems were in full swing and pushed the tribute back twenty minutes. I had stepped out of the tent to figure out whether we should just head out to see the next band or continue to wait. I heard the familiar keyboard notes of “Ghost Rider” and ran for the tent. The guy singing couldn’t be heard until the end of the song because of mic problems. Luckily, when Ariel Pink took the stage to sing “Cheree” his microphone worked. While I considered riding out the rest of the set, we were running out time to get to the Moon Stage.

Pond was already a few songs into their set when we arrived. Hailing from Perth, Australia, Pond shares members with Tame Impala and usually ends up at the same festivals. Pond were on their own this time, and played a very entertaining show. The band members bantered back and forth about going out to see the real Joshua tree or maybe just seeing a Joshua tree. It was decided that regardless of which it was, it had some “powerful vibes.” Vocalist and guitarist Nick Allbrook was quite the gracious performer as a fan yelled thanks and he responded sincerely, “Not at all. It is our pleasure.” At some point during the show, one of the bandmembers had said, “Carrots are good for your eyes. Where’d that carrot go? I’ve got shit eyes.” Sure enough, out in the crowd, left stage stood the dancing girl with the ten foot carrot stick. Pond went on to play “Sweep Me Off My Feet” and got the crowd dancing and singing along.

Next we were off to Foxygen. Sound issues had the band running a little late on their start time. A few minutes in, everyone in the band held one finger in the sky as the drummer kicked the bass drum. The crowd was energized and whistling, howling, and clapping as they awaited what the band would do next. I thought, “Is this a political statement? A protest? What are they doing?” This went on for several minutes and it eventually became clear that Foxygen wasn’t starting the show or making a point. They were just trying to tell the sound operator to turn up the bass drum. Thirty minutes later, the set began. Wes ran around frantically snapping every photo he could. He wasn’t about to miss the next act. I stuck around a bit longer, because Foxygen had put together a five-piece brass band and were playing “San Francisco” and “Shuggie.” Watching Sam France twirl, dance, and sing is always interesting. Every performance is a bit different. You can never quite tell if he is serious or having a laugh. Sometimes he would attack a song like it sounded on the album, other times like it was a Broadway musical numbers. One moment he is buttoned down and serious, the next euphorically unhinged. It is like watching Mick Jagger perform after he saw James Brown the first time and decided to throw a little Johnny Rotten in for good measure. By the time the set was over, there had been a costume change and a huge medley. Say what you will about their performances, but Foxygen is rarely boring.

In the middle of the Foxygen set, I ran to the Moon Stage to catch the legendary Television. They began to play before they stopped and told the audience that they were told that they couldn’t start for another thirty minutes. With that, after seeing over two hundred performers and bands in my life, my eyes witnessed the first band that ever went on too early. I ran back to watch the rest of the Foxygen’s set and returned before Television had started. The temperature had dropped considerably by this point, but no one wanted to miss seeing Tom Verlaine and his band play. Verlaine apologized for not coming out on time, and the band proceeded to play most of their great songs like “Elevation,” “Prove It,” and “Marquee Moon.” The performance was almost note for note perfection. I can’t imagine that the same could be said of Television in 1973, but it hadn’t lost its vitality either.

The Brian Jonestown Massacre were already on stage before Television ended their set. The crowd was beyond capacity at the Block Stage. Never during the three days did that many people squeeze into the area. Anton Newcombe was dressed all in white more like a cult leader than a Rolling Stone. He played old and new songs from “Anemone” to “Government Beard” from his forth coming album Third World Pyramid. At one point, someone was shouting requests and he replied, “We don’t take requests. Spotify takes requests.” Newcombe told the crowd that his grandmother’s house wasn’t far from the venue. He said that when he was ten years old, he would drive a dirt bike around, shirtless, with a gun strapped to his back, and walk into the local general store to buy some ammunition. “No one batted an eye. My how things change,” he mused. Then his band played us off into the night as we all made the decision to pack up and head home or sleep in the desert one more night.

As we drove back to Los Angeles, I reflected on my Desert Daze experience. The lineup was fantastic, and the festival organization was unobtrusive. Sound issues arose, as they do at nearly any show, and it is frustrating for all parties involved. In the end, everyone played their full set, and the crowd got exactly what they came for. I wouldn’t have traded the experience at all. I mostly just wanted to get home to wash the sand off. Oh, the Primus fans were fine. 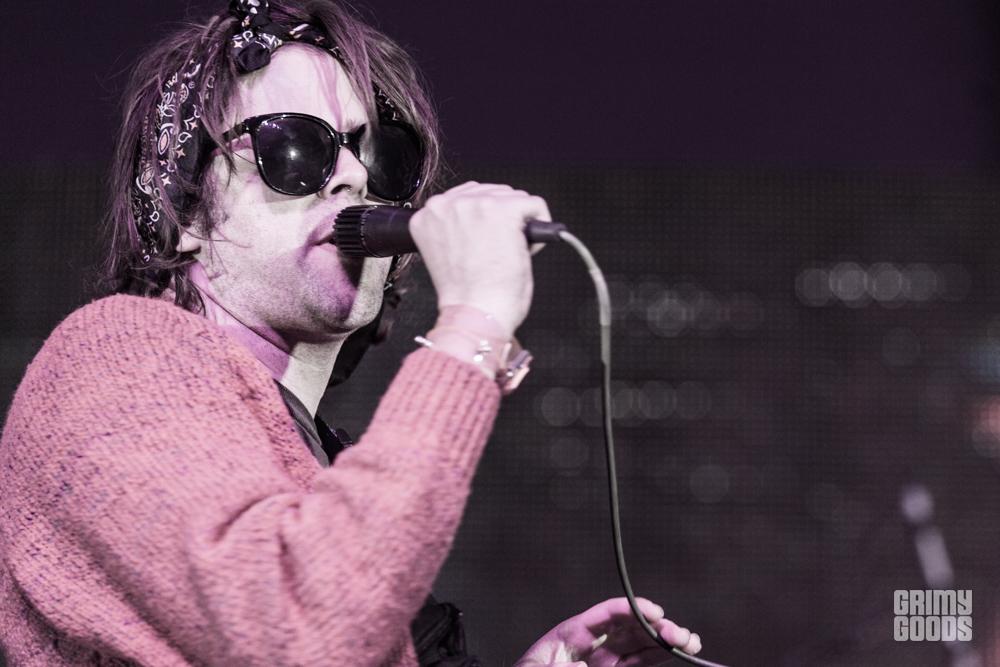 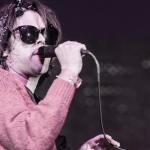 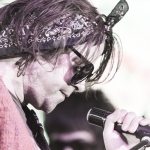 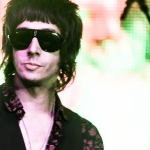 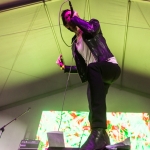 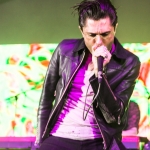 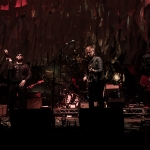 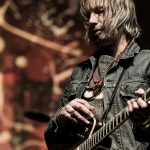 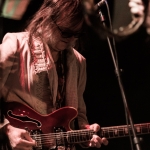 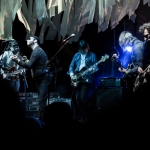 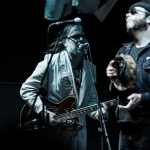 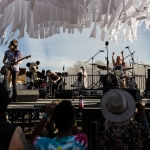 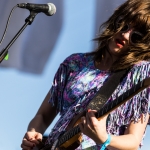 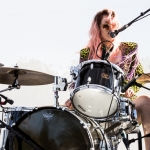 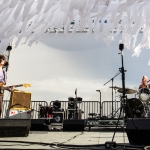 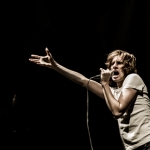 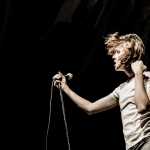 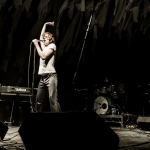 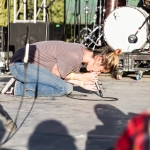 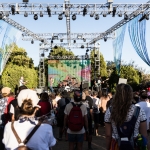 Despite a Recurring Theme of Sound difficulties, Desert Daze Kicked Out the Jams on Day 1 with Great bands, Great Vibes, and… Pandas