Monstrous. Larger than life. Titanic bordering on the mythical. Hip-hop duo Run the Jewels have done in two years what most rappers hope to achieve in a lifetime: since their self-titled debut in 2014, they’ve managed to gain ahold of near iconic status–and they just refuse to let go. With the release of RTJ3 last December, done without the backing of a record label, Killer Mike and El-P have launched the bold confidences of their chest-pounding, deviantly wicked poetry into the outer-atmosphere. If the sky was the limit, Run the Jewels never got the memo. Making one of their first stops on their Run the World tour, the two rappers left the Shrine Expo Hall a ruinous wreck–tossing combustive lyricisms and concussive beats like molotov cocktails filled with dynamite.

The duo’s personas alone can make any stage feel woefully small, and the shadows they cast when they’re looming over the crowd are ones filled with the frenetic roar of hundreds of delirious fans hanging on the end of every rhyme. The veritable authors of the anarchist cookbook, any RTJ show is stooped in a self-aware insanity and the duo have become masters at commandeering that madness into sharp critiques of race and politics. The timing of RTJ3‘s early release wasn’t an accident, and the album’s undertones of political fury at times become overtones; but the appeal of RTJ lies in their inability to appear as if they’re shouting from a soapbox, or to even exhaust their subversive niche. “I kill my masters/I mentor none,” Killer Mike spits feverishly on “Angel Dust,” and at their shows, for all their colossal emblematic resistance, RTJ makes it a point to do just that by emphasizing that you should only swallow whatever you can chew out of their lyrics.

For Killer Mike and El-P, their emphatic power is in the delivery of their ferocious lines. Rarely do the duo’s lines intersect (and even when they do, the cohesion is not without suave criminality), instead they hand-off turns on the mic in lightning quick transitions that have you whipping your head back and forth between the two. But the movements are fluid, the switch-footing eventually becoming a single voice, a punishing one-two punch from the beastly machine that is Run The Jewels. Borrowing no small angst and anger from the current climate–and devoting a majority of their show to RTJ3–the overall sentiments of inflammatory mischief and biting digs had a less than ambiguous target.

“Went to war with the devil and shaytan/He wore a bad toupee and a spray tan,” Killer Mike huffs on “Talk to Me,” making a not so subtle reference to the sentient cheeto that is now President (as well as a wonderful commentary that he’s an enemy across the religious spectrum).

It might be a moot and obvious point, and regressive to the point being made in pointing it out, but RTJ is the collaboration of two men from different worlds (and yes, with different skin tones and the experiences that come with them), but the solidarity between them is implied and the necessity for it gushes from their lines.

“Hey, not from the same part of town, but we both hear the same sound coming/And it sounds like war/And it breaks our hearts,” El-P spits out on “A Report to the Shareholders,” gauging the roots of his and Mike’s friendship and work together as a bond of interest, but also need. RTJ sees what’s coming, and every rhyme–for all their fiery velocity and violently coated appeals–are cautionary tales worth heeding. But their warnings are not without glimmers of hope, Killer Mike punctuates

Whether it’s the visceral, biracial points of perspective that get dissected on, “Don’t Get Captured,” rapped over a haunting choir, dismal piano twinkles, and disorienting record scratches, or the futuristic electronica that buzzes in on, “Thursday in the Danger Room,” over transmissions of El-P’s poignant self-reflections; RTJ has little trouble balancing the gaudy weight of its impishness with caustic emotionality. For the loaded narrative of “Early,” the duo brought out Boots, one of many guests to join them onstage, to help them navigate the track’s cutting documentation of injustice. Immediately afterwards, Travis Barker of Blink-182 accompanied RTJ for “All Due Respect,” and for their encore they brought back Zack de la Rocha for two songs.

“The world surges, the nation’s nervous/The crowds awaken, they can’t disperse us/We ain’t at your service, won’t stay sedated/Won’t state our numbers for names and remain faceless/We dignified, they can’t erase us,” Rocha let loose on “Kill Your Masters,” and he might as well have been breathing fire. Taking whatever was left of the Shrine and pulling it apart at the foundations, RTJ took their monumental swagger back to RTJ2 one last time with “Close Your Eyes (And Count to Fuck),” ripping through their lines with possessed barbarity. If there ever was a rap duo that was both a reaction and reflection of the times, RTJ would be it.

More Photos of Run The Jewels at Shrine Expo Hall 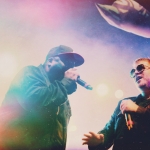 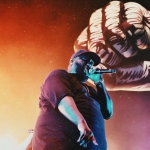 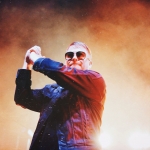 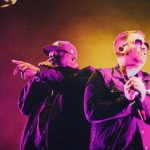 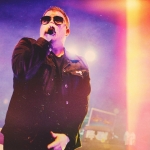 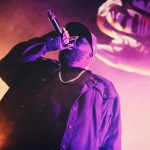 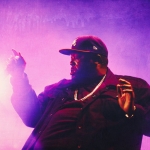 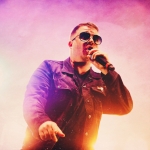 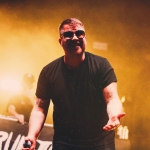 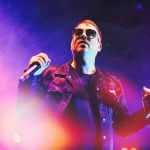 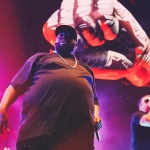 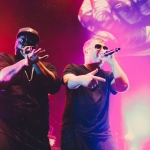