Kicking off much earlier than the first day and baking its attendees in the process, FYF day two kept the heat at bay with a stellar lineup of afternoon acts that allowed fans the chance to shake off the sweat to some groovy tunes. Opening up the afternoon on the Trees stage Homeshake sprinkled their lo-fi rock across the field as lead singer Peter Sagar smoothed over the fidgeting crowd with his prettily polished crooning. Caught in that vein of glazed-over, DIY indie-rock that bubbles dually at the underbelly and as the foundation of FYF, Homeshake rocked slow-and-steady in an attempt to beat the heat–and we all were happy to follow suit. With a smiling Mac Demarco standing off to the side of the stage, their set was truly the quintessential FYF aesthetic and was reminiscent of (Sandy) Alex G’s early afternoon set on the same stage last year.

Over at the Club stage Big Thief got off to a late start due to complications during their soundcheck, but once they got going the acoustics of the entire venue went angelic as Adrianne Lenker dripped in measured breaths her soft murmurs. Onstage with her band but spread out so that she might as well have been alone, Lenker’s vulnerability is as organic as it is so effortlessly spellbinding. Once again this year’s sets had some echoes of the past in them, as when the large crowd and even Lenker’s own band mates were hushed to silence as she pushed out an acoustic tune with heartbreakingly gentle sighs. Not unlike Julien Baker’s set at the Club last year, the stage’s construction makes it the most intimate venue at the festival and allows its performers soncics to pretty much saturate your clothes and skin. For Big Thief, that meant an unassailable oozing of emotional sleekness as they fiddled casually on their instruments to the beautiful meanderings of their vocalist.

LA’s bass-fingering queen of sad-beats Mitski took to the Trees stage just as the heat reached its peak, but even a burning bright sun could evaporate the singer’s sparsely populated rock tunes. Embracing the heat and almost disappearing against the black canopy behind her in a black dress, Mitski was a melancholic wraith caught in the daylight. Waning back and forth on her bass guitar between a reserved depression and hopeless romanticism, there was something so delightful in losing oneself to music that you didn’t feel compelled to dance to. Besides it being just way too hot for any kind of movement besides raising your arm to dump water on your head, Mitski let the crowd lose themselves in the winding grooves of her buoyant riffs and its accompanying deeply pulsing permissiveness.

In direct contrast to the mellow emotionality of Mitski was Thundercat’s funk party over on the Lawn stage. Sweating under his hot pink locks and adorned as the funk master supreme ina purple robe, Stephen Bruner opened his set with a ten minute bass solo that was both bonkers improvisation and an unabashed baptizing for any even vaguely unafamiliar with the man’s electric instrumentation. Shooting hot fire from his fingertips and losing his own mind with every riff, Thundercat paid homage to his namesake by refusing to be anything except a ferocious lightning rod of insane grooves.

As one of the last big acts before sunset, MGMT had the task of closing out a day that had left fans hot and tired. But seeing as how their performance was end to a long hiatus by the band, the moment the opening synth ripples of “Time To Pretend” started to make their way through the crowd, MGMT had FYF bathing in the affectionate nostalgia of their flash delirium. The sun might’ve been up when they started but it wasn’t long before the only light hitting the bodies swaying in the crowd were the ones being emitted from the stage. Never ones to shy away from the organic psychedelia that is the lifeblood of their music–often imitated but never replicated in their absence–MGMT let loose the weirdness with the mind-boggling animations that swirled behind them. Andrew VanWyngarden’s croons are a whirlpool of drowned beauty and pining wonder. No synthetic or artificial aid required, the guy just opens his mouth and that euphonious trill leaps and bounds over you, shooting neon and rainbow-soaked melancholy into your chest. Sublimely nostalgic, most MGMT songs are a lot like rewatching home video tapes of your childhood while tripping on LSD–blow that up onto a festival setting at the main stage at FYF and the comiseration gushes aongside the bliss.

Thundercat at FYF 2017 by Steven Ward

Homeshake at FYF 2017 by Steven Ward 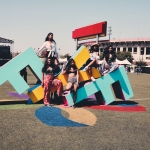 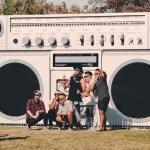 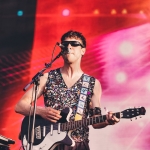 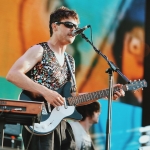 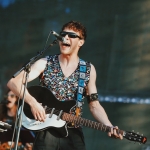 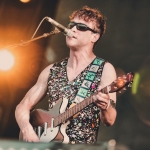 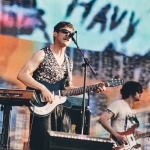 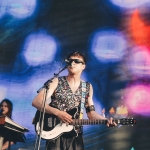 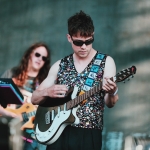 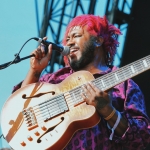 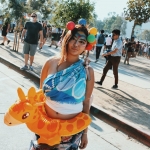 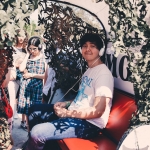 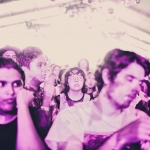 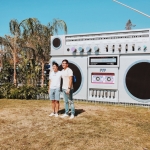 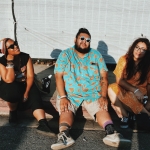 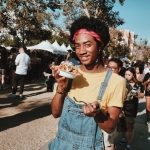 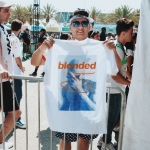 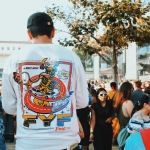 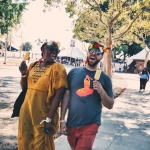 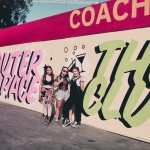