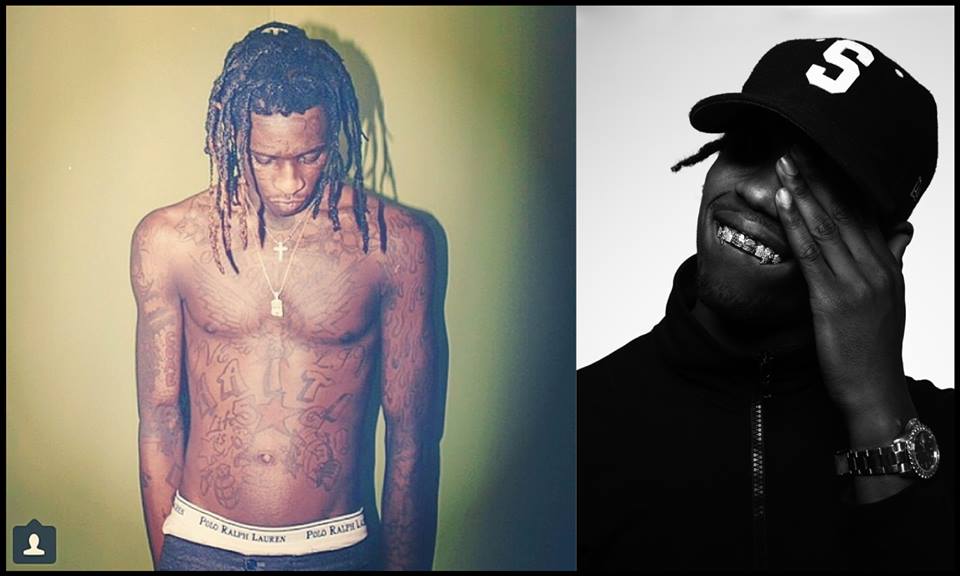 What makes the genre of rap compelling is the one-upmanship of artist’s egos. This is most obviously noted in lyrics, but can also be a form of bravado associated with being the first to corner a sound or a theme. On the stage this is no different. Wu Tang, D-12, Watch The Throne, have all accomplished their best performances when the artists therein were at their most competitive. Hell, Drake and Wayne went on an entire App-Oriented “Versus” tour based on the sort of head-butting power shifts that play out on stage.

So, it is to be expected that there was a palpable tension on the first night of the Rodeo Tour at the Observatory in Santa Ana. The bill, fronted by Travi$ Scott and Young Thug with DJ assistance from Metro Boomin’, was set to be explosive, but the lack of chemistry between all involved made it damn near volatile.

It must be mentioned though that this was the Rodeo Tour’s first night. Whether or not it is fair to assess the next stops based on this review is up to scrutiny. But, considering what I witnessed Sunday night, this tour needs to figure itself out quickly.

It started off innocently enough. A couple unknown rappers came out early for some practice. They mostly caught their own bars on occasion via playback. More like Karaoke than a performance. But, as Anna-Marie Schiefer pointed out in her GZA review, The Observatory is prone to showcasing new talent in need of some stage rehearsal. It has become a testing ground of sorts.

And, like Schiefer, I was also enjoying the DJ more than those opening acts. Boomin’ was playing Gucci Mane tracks that got the blood pounding. He must have played like four Drake songs from that new mixtape. Seeing an auditorium full of kids yelling ‘WITH MY WOES!’ is proof enough of how effective Drizzy’s latest nestled into the market. Sure enough, OG Maco’s ‘U Guessed It’ set the keg to bursting; everyone was cooking up a buffet.

By the time Young Thug came out to perform, we had warmed up our trap-arms. But, when he started in on the explosive “2 Cups Stuffed” something felt off. The bite wasn’t there. The track sounded smaller in that live setting than on record; it wasn’t nearly as impactful.

Not to say the tracks weren’t loud. In fact, the playback was so loud that you couldn’t hear Thugga’s mic at all. On what infrequent occasion he got heard, he sounded strained, like he was trying to yell over the track. It was bizarre, and really took away from Young Thug’s wild, eccentric flow.

This was not the case for Travi$ Scott. His sound and performance were gigantic. Huge bass, detailed vocal delivery, his set was more thought out, more explicit than Thug’s. It surprised me but, than again, Yeezy taught him and you can’t get a much better mentor than that.

Young Thug, on the other hand, has had very little in the way of mentoring. Considering the current sinking ship that is Cash Money it’s fair to assume that Wayne hasn’t accepted Thug, he hasn’t been much endorsed by Nicki and he hasn’t received the all-important Drake cosign. In retrospect it’s a testament to Thug’s incredible talent that he has gotten as far as he has. Scott hasn’t made anything nearly as socially ubiquitous as “Lifestyle,” but the crowd was still easily on his side.

Thug felt it too, and here is where things started to get weird.

Thug came out with ‘Imma Ride’ (one of the best songs on the Rich Gang Mixtape IMO.) For a brief moment as Thug began the TI collab “About The Money” it seemed that the crowd balanced out. But all of a sudden the sound cut out and Travi$ came back on stage to a confused Thug.

There was a noticeable reluctance as Thug walked off the stage.

If anyone was still in the dark regarding the ego clash occurring on stage, Thug made sure we knew. At one point he refused to come out. The stage was empty and darkened and there was no music for at least two minutes, two whole concert minutes.

Metro Boomin’ started a chant of ‘Thugga, Thugga, Thugga” but he was the worst hype man ever. Seriously it sounded like he was yawning or something.

“Shut the fuck up, Metro,” Thug said as he walked out “No body want to hear that shit. Don’t talk no more.”

Thug performed two more songs. And by perform I mean he stood out there as the track played.

When the track cut out Thugga yelled, “put one hand up if you wanna see this pussy ass n*&&a Travi$ Scott!” Everyone was confused.

Thankfully, Scott came out and turned it back into a show, “I need more sweat,” he coaxed, “I need more blood! And I need whole lot more titties.” Suddenly it was an event again.

This went on and on for the better part of an hour. It was fucking weird, man. The only time that Scott and Thug got along was when they were bitching out ‘James.’

If you, like the 500 in attendance, don’t know James, he is the guy who takes care of the visuals. During the encore (if you could call it that) Thug and Scott performed their collaborative track “Mamacita.” Scott, in disdain, yelled, “James, where the fuck is our Mamacita visual on the damn screen?!”

Eventually the ‘Mamacita Visual’ and the encore continued. At some point Birdman showed up on stage smoking in sunglasses. Just standing there. Just smoking, in sunglasses. He was the calmest person in the fucking world.

As I left, there was another line of fans waiting for the late show. It was set to start about an hour after the first. I sincerely hope that was enough time for everyone to get their egos ironed out. This Rodeo Tour has a full month left to it.

Watch Young Thug and Travi$ Scott performing at the Observatory in Santa Ana: