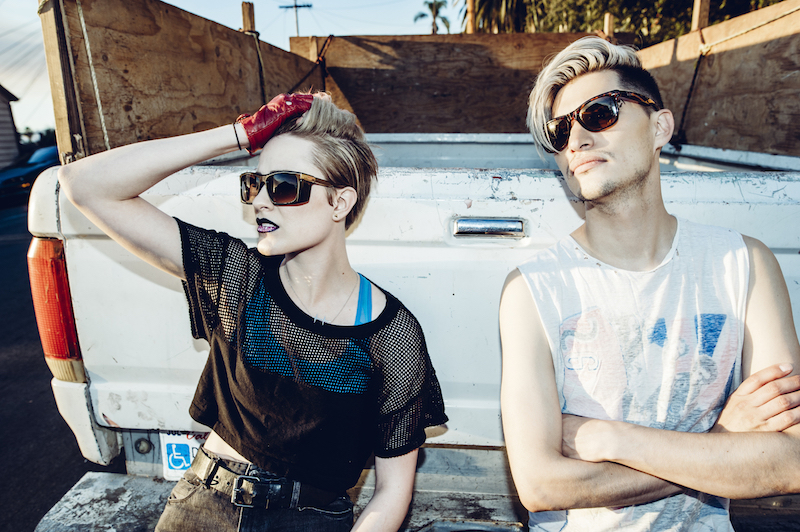 The new band composed of Evan Rachel Wood and Zach Villa are hot-on-the-heels of a full-length record. In early June, Rebel and a Basketcase made their debut with their deliciously catchy “Oh Yeah.” Like flies on honey, the track will pleasantly get stuck in your head. I can’t tell you how many times I’ve gone to bed, or woke up to the tune playing in my head. I’ve even found myself just randomly saying “Oh yeah.” With meaningful lyrics and a playful self-awareness, “Oh Yeah” is a brilliant 80s electro explosion (watch the video below).

But it doesn’t stop there. Over this past weekend, Rebel and a Basketcase shared their debut EP featuring three songs: the aforementioned “Oh Yeah” along with “Girl On The Wire” and “Lightning Look.” With “Girl On The Wire,” Wood’s vocal prowess dominates with strength and power. What starts almost like a soft ballad, quickly hurricanes into a bold anthemic number powered by Wood’s operatic vocal sheen. It’s truly a stunning number, even more so live.

Flipping the switch with “Lightning Look” — the rebel – aka Zach Villa, takes the lead on this sexy song. Alluring not only because of Villa’s soft and smooth vocals, the song has a sensational crescendo. It kicks at the perfect moment, then lulls you back into dreamland with the cuddly coos emanating from Wood’s vocal wonderland.

With just three songs and a slamming performance last night (stay tuned for full show review and photos), Rebel and a Basketcase are on their way to stardom. Their music is robust with various titillating flavors of the musical rainbow, and their lyrics are both personal and inspiring. Not to mention, the duo wrote and self-produced every inch of their forthcoming album. Don’t be surprised if these two play Coachella next year, and embark on a tour sooner than later.

Rebel and a Basketcase have a second Los Angeles show date at the Bootleg Theater on Thursday, July 21. Grab your tickets here before they sell out!

Watch Rebel and a Basketcase’s new video for “Oh Yeah” and stream their new EP below!