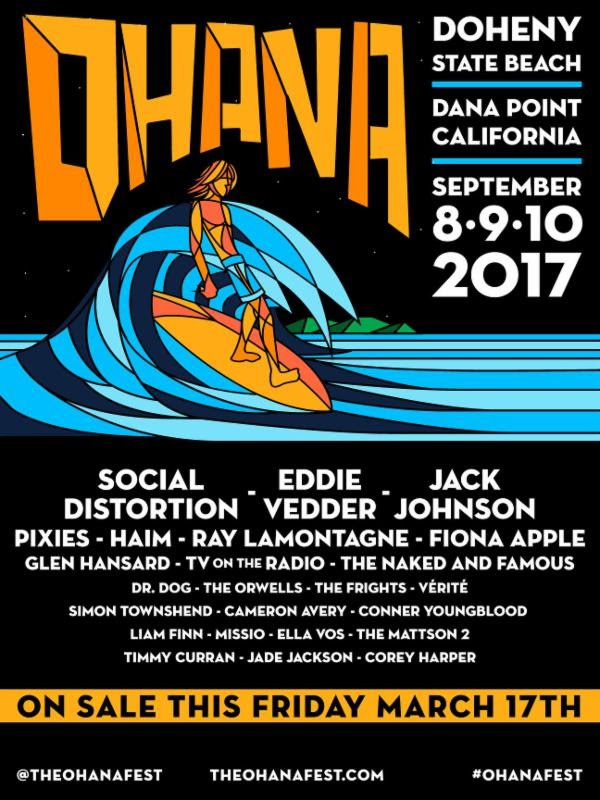 With the kind of picturesque, coastal views Southern California boasts, it’s pretty surprising that Ohana Fest remains the first and only beach-side music festival to emerge in recent memory. Placing stages and fans about as close to the water as possible without jumping on surfboards and rafts, the festival will be returning in early September with a lineup that tops last year’s bill. With Eddie Vedder coming back as one of the three-day festival’s headliners, along with local favorites Social Distortion and soothing crooner Jack Johnson, Ohana Fest promises the kind of rock-‘n’-chill the south coast finds synonymous to itself.

Rounding out the rest of the lineup are indie rock’s favorite sisterhood Haim, as well as the Pixies, Fiona Apple, Ray LaMontagne, Glen Hansard, The Naked And Famous, TV On The Radio, and more.

Taking place September 8-10, even if Ohana doesn’t escape the inevitable heat wave that will swelter Souther California, what better place to endure it than at Doheny State Park. Where else will you be able to sit on a board in turquoise waters or on a sandy beach listening to the folk ditties of Hansard or the rock anthems of the Pixies?

Tickets for Ohana Fest are now on sale and can be purchased here. GA single day tickets are $99.50 and 3-day passes are $275.00. VIP passes start at $499 for single day and a weekend pass is $1200. Portions of the proceeds from the festival will go to the San Onofre Parks Foundation, a California non-profit that works with the California State Parks to preserve out state’s coastal parks.