For the past month, Red Bull Music Academy creatively executed a music festival in Los Angeles in which all kinds of experiences took place. From underground to the sublime, the festival had it all.  On this occasion, I headed to celebrate the life and music of Alice Coltrane, the iconic harpist, pianist, composer, and wife of John Coltrane in a tribute night co-presented by world music record label Luaka Bop.

The event took place on the 11th floor of the Cooper Design Center in Downtown LA. If you missed the time to get the elevator, as I did, you had to go up the 11 floors taking the stairs.  Once you caught your breathe and got up there, you were requested to remove your shoes to enter the space set up as a temple.  Long gold and red curtains were placed by the large windows facing the city, and gold cushions were provided to some as seats. The performance featured the music that Alice Coltrane Turiyasangitananda wrote while living in her ashram / retreat outside of LA in the 80s, recently reissued by Luaka Bop. The Sai Anantam Singers, who lived with Alice in the ashram, accompanied by musicians led by Miguel Atwood Ferguson — reached that ecstatic feel proper of her world.

The crowd had been quite expected and attendance did not disappoint. It was a sublime, solemn and intense all at the same time; and as many people in the audience stated, the spirit was felt. 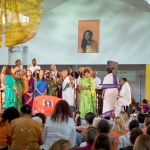 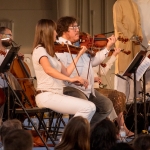 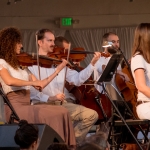 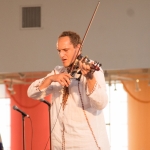 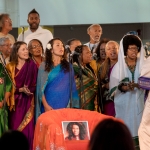 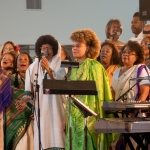 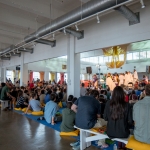 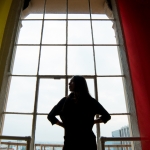 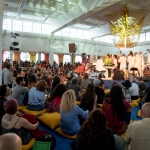 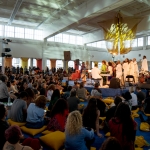 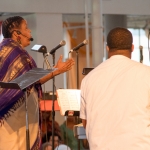 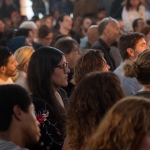