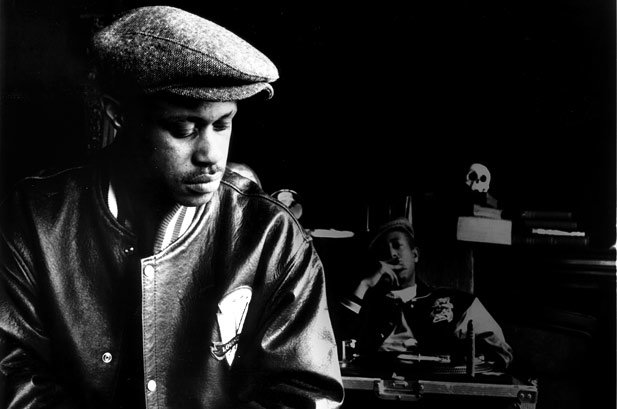 Known best for fuzing Jazz and Hip Hop in a revolutionary, yet copacetic way, Keith Elam AKA Guru (Gifted Unlimited Rhymes Universal) had a knack for combining different styles of music as well as mastering socially conscious songwriting. Guru, who passed away in 2010, left a discography spanning decades that continues to inspire and entertain music connoisseurs of all ages.

Guru’s first solo work came in the form of Jazzmatazz, Vol. 1; Vol. 2 would follow and hit just as hard). In Jazzmatazz, Guru blended together Urban fueled lyrics and a Hip Hop style with a live jazz sound. While others were sampling from the great Jazz players of earlier decades, Guru went a step further to be the first to combine a live jazz band with a hip hop production; jazz legends including trumpeter Donald Byrd and pianist Lonnie Liston can be heard on the first album.

Guru’s talent not only as a producer, but a rapper, comes to life in these two albums, the first of which turned 25 last year. Both albums, the first in particular, capture a sincerity and true appreciation of music from a musician to musicians. Guru does not just take inspiration from his predecessors, he utilizes their talents in the present moment and revitalizes their work. The artistic collaboration from generation to generation is captured beautifully in the musical love letter, “Respectful Dedications,” a clear example of the sentiment and respect woven into the experimental fusion album. The less than a minute  long song breaks apart the album, but is just a palate cleanser in the midst of a very flavorful album. Songs such as “Trust Me” exemplify the masterful collaboration that takes place within Jazzmatazz Vol. 1.

Before Jazzmatazz Vol. 1, Guru formed Gang Starr, a group that initially fell flat after just a few releases. Guru persisted though, and eventually came across musician DJ Premier. Together the two released several acclaimed albums under Gang Starr that were immediate underground hits and have since become essential hip hop listens. Throughout their career, Guru played with his style of conscious rap and even adopted a brasher style from time to time to match DJ Premier’s energy. Unfortunately the two had differences in opinions and split for good in 2003.

While Guru continued to make music into the mid 2000s, nothing hit as hard as his earlier work. In 2010, he fell into cardiac arrest and died post surgery after he slipped into a coma. His death was a loss to the music community, but it was also shrouded in confusion because of a mysterious online message that defamed Guru’s former partner, DJ Premier. Both Guru’s family and DJ Premier deny the tweet was written by the late musician and firmly claim that the rapper was in a coma at the time the message was posted, and at no time did he wake up from his coma to be able to write the post.

Still, even with a strange ending to the messenger, Guru’s message of positivity and peace live on through his inventive music, and it will continue to inspire musicians and fans for decades to come.