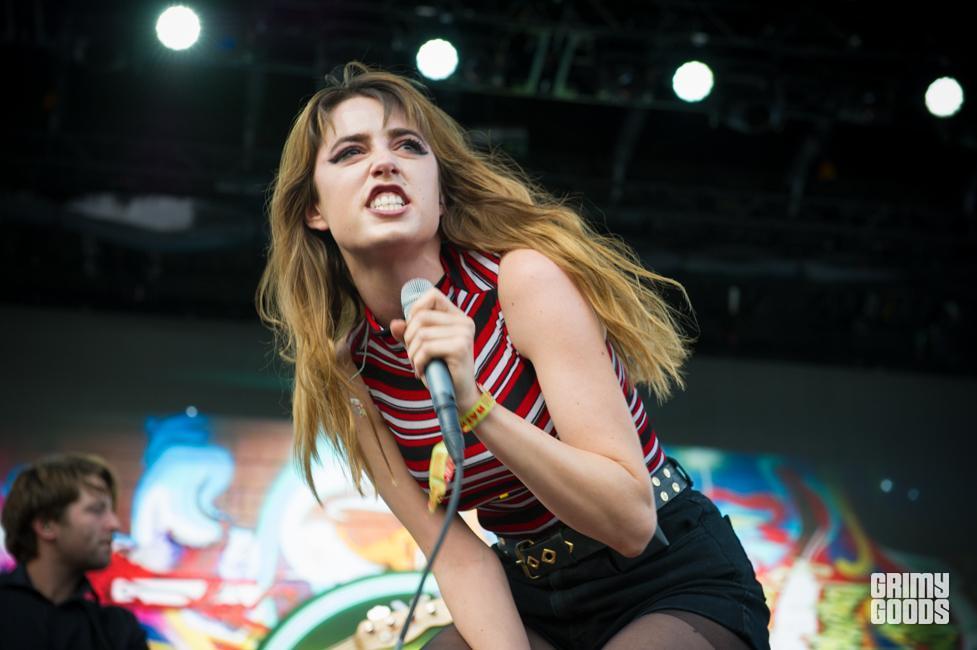 Last June, a song exploded in the music blogosphere that had tons of people asking one question: Who the f*ck is Ryn Weaver?

When the wildly addictive “OctaHate” arrived on the scene last year, there was very little information out there on the talented singer-songwriter behind the track. Now almost a year-and-a-half later, the 23-year-old pop star has performed at many major music festivals (from SXSW to Coachella to Bonnaroo and many in between) as well as appearances on late-night TV.

I’ve been lucky enough to see Weaver perform a whopping eight times, starting with a handful of sets in Austin at SXSW and more recently at Life is Beautiful in downtown Las Vegas. Due to all the publicity that has accompanied her brief time in the spotlight, you don’t have to have been there in person to see just how much progress she’s made in such a short amount of time.

I spoke with Weaver over the phone as she gears up for her Misfit Toys Tour — which stops at the Belasco Theater on Saturday, November 7 and includes openers ASTR and HOLYCHILD. It is Weaver’s largest headlining stop in LA so far. Just a few months ago she killed it atop a sold-out gig at the El Rey.

Weaver performed on Letterman before she’d even reached double-digits in terms of live performances. Though she tweeted afterwards that it was “kinda shaky at times,” she performed admirably given the pressure that came along with it.

“I was soooo scared,” Weaver said about performing on Letterman.

“I wish it happened like a year later, because I feel like I could do it now in a different way than I could then, but it’s so cool because it marked such an interesting – it chronicles my growth. It’s literally all kind of been out there from the beginning, which is a joy and also something that’s kind of marvelous and really honest. I think a lot of people do a lot of their growing behind the scenes and I feel like mine was out in the open and I think that’s pretty cool.”

In speaking about the experience, Ryn related it to when Lana del Rey performed on SNL before her feet were fully wet.

“The weird thing about the digital age I think is that you’re naturally under the microscope,” Weaver said. “I had an online presence but no one had seen me perform live.”

“People thought – there was a conspiracy for a minute. Kids were being like, ‘Is she a hologram?’ Obviously not like a real one but like a funny online trolling sort of situation. So there’s always a lot to prove coming from something like that, especially after – I think Lana is kind of the script that we go by for that. Lana was torn apart, which is sad because now you look at it – I saw her at Hollywood Bowl just a little while ago — phenomenal. People don’t cut you any slack when you’re starting out. It can be daunting especially when people expect so much so quickly.”

Though “OctaHate” seemingly came out of nowhere, Weaver’s journey hasn’t been easy. She went to school in New York with a primary focus in acting, though she notes that music has always been high on her list of pursuits. 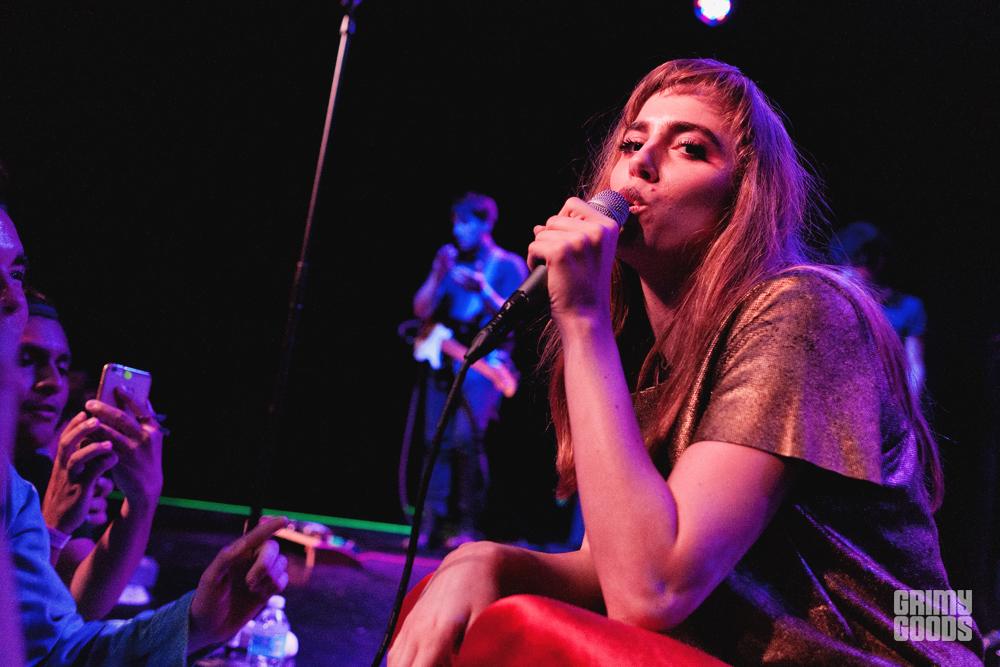 “Living on couches, living off a thousand bucks for like months,” Weaver said of some of her days before everything clicked.

“It’s a struggle – but showing people music, also being around a lot of musicians helped me. I spent a lot of my college years just being around that scene and getting excited by it and trying to show people my stuff. It’s always a journey, whether you’re on the outskirts trying to get in, it takes time.

“My first thing came out when I was 21 or 22 and that’s a lot of years from when I assumed it would happen to when it did. That’s a lot of time trying to hone in on where you’re going instead of throwing shit at the wall and see what sticks. I don’t think anyone is fully ready for viral success. Kind of like a funny crazy thing.”

Weaver has more than lived up to the viral success of her debut track, particularly in sharpening up her live performances. When I first saw her at SXSW back in March, you could tell she was still building confidence in her performance.

“It all kind of happened within a very small amount of time,” Weaver said of what her life had become so quickly.

“People wanted to make it pop radio first, so I did some performing for radio stations but it was so bizarre and I hadn’t really gotten my feet wet on stage. It was a very different experience. Radio promo is kind of a nightmare. I was so confused, like, ‘what is this job?’ Then I started playing live and it all started making sense, like this is what I give a f*ck about. It was all in a very small amount of time. I went from SXSW, and that was when I literally just started figuring out my live shows, my EP and a couple other songs – to then Coachella, which was like the first time I ever played all of my songs together, ever.”

Weaver’s Coachella sets came early in the day Saturday, yet the Mojave tent was pretty packed both weekends. On the second weekend, I was close to the front of the stage and actually talked a bit with one of her uncles, who was obviously very proud.

“That was my dad’s side,” Weaver said. “I had just lost my grandfather, he was from Coachella Valley, Indio area. Their whole family lives there so it was a really beautiful thing, we got them all tickets.”

“They did a lot of shit for me, you know what I mean?” Weaver said, when talking about sharing her experience in the limelight with her family. “I feel like it’s kind of important, to be able to at least give them a little taste of the life, because it’s fun for them. When you’re doing it every night of the week, sometimes you get kind of exhausted and you stop appreciating it. It’s truly fun to bring family and bring people around that don’t get the opportunity to do it all the time and make them think your life is more grandiose than it is.”

One thing that sets Weaver’s shows apart from other performers is her ability to engage her audience. At one point in almost every show of hers I’ve attended, she asks people in the crowd to turn to the people next to them and introduce themselves. Despite many people being absorbed by their phones, they seem to always embrace this request from Weaver. As someone who attends countless concerts, many by myself, it’s a welcome thing to see. 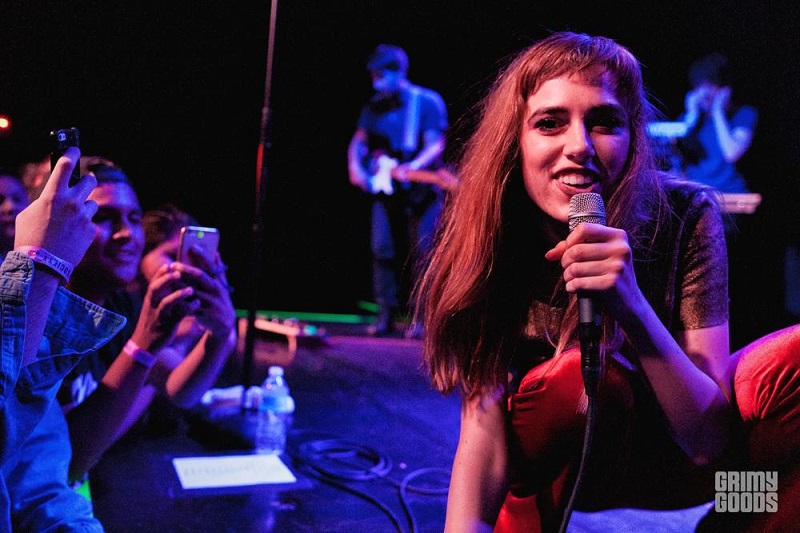 “I think I was at a show when I decided [to do] that. I always had that thought when I’m at a show. Because I’m always people watching and you’re always next to someone – especially when you’re at festivals.”

“I think there’s a communal element to engaging in music when everyone likes the music that’s playing. Then also everyone always films everything now instead of just observing it. I actually get really upset when I’m at shows and all my friends all they’re doing is filming every song because you’re making sure you’re shooting it right and that your hand’s not moving too much. It’s living in the future — what you’ll be able to show people — versus the present. I want anyone that’s there to experience the story and enjoy it and make new friends because depending on what kind of music you listen to, don’t you want to find like-minded people? I feel like that’s important. We live in a world now where everyone’s online but no one knows who to call, how to even engage and talk. I’m even more socially awkward than I used to be because I’m so – we become so reliant on our phones and things we forget that awkward silence isn’t awkward, it’s just silence. I think it’s important to these kids – especially I have a lot of younger fans, I want them to engage and not just post these things on Twitter and then go home, and have the kids that were there too they didn’t meet but they’re all tweeting each other photos from it – meet, goddammit! Make friends.”

Weaver’s ability to communicate with her fans doesn’t just come in the form of her live shows — she’s one of the more engaged musicians I know of on social media, particularly on Twitter.

“I think it’s really important to stay in touch with your fans and to make new ones and to understand them and engage,” Weaver said.

“I also enjoy their tweets, I have a lot of really, really funny kids who follow me. It’s entertainment for me and it also brings me back down to earth and sometimes I think our problems can seem so much bigger than they are in this industry because you kind of feel alienated and you have a very different schedule than a lot of people. I think I need them as much as they need me.”

Having seen her perform at a multitude of music festivals and earlier this year at the El Rey, one thing is pretty clear to me: pop music is much more intriguing and entertaining with Ryn Weaver in the mix.