They were just one of the openers, but nobody seemed to have relayed that message to dynamic duo Rebel and a Basketcase as they hit the stage at the Satellite Thursday night. Comprised around the talents of Evan Rachel Wood and Zach Villa, everything about the two screams 80’s rock and glam; from their very name (a homage to The Breakfast Club characters), to the wild serenades they throw at the crowd that are equal parts bleeding-heart howlers and moody atmospheric bass thumpers. But the decade-fixation by Woods and Villa is not so much a rambling nostalgia that they’ve copied and pasted as their aesthetic–the whole reason behind the band’s very creation was the two’s desire to continue pretending they were living in a John Hughes flick–and their tact is much more genuine.

Wood is a natural onstage, breathing in the crowd’s rabid enthusiasm and roaring it back to them, whether its in a deadpan, monotone delivery over twinkling synths (“Escondido”) or twirling her sharp vocals around Villa’s glittery guitar lines. Rebel and a Basketcase effectively bridge the gap between head-rushing rock and danceable body-ragers, infusing a self-aware sense of melancholy and hope–a feat that Wood has little trouble accomplishing. Strutting and spinning onstage, she dazzles in the ways most 80’s artists might’ve, hypnotizing not with hyperbolic passion, but an almost restrained inner-conflict. It’s easy to see that both Wood and Villa wear the inspirations of their songs not just on their sleeves, but have them painted all over their bodies and then they dump them on the crowd as if to say, “We know you’re feeling these things too, so just let it out.”

At one point, Wood questioned the crowd if anyone present had ever fallen in love while on absinthe–there were a few laughs and even some yells of affirmation–to which she replied, “Then you’re going to love this next song.” Every song was a similarly personal narration that sounded a lot like Wood and Villa singing the soundtrack to your life to a crowd of strangers, like the bittersweet ending to an 80’s film that fades out before the song ends.

More Photos of Rebel and a Basketcase at The Satellite 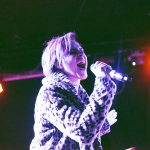 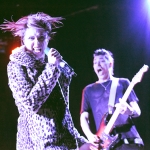 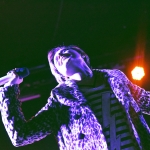 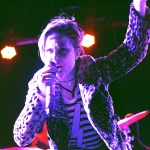 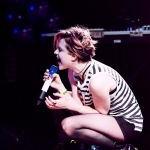 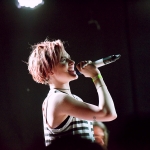 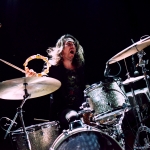 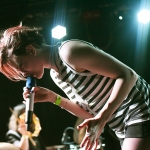 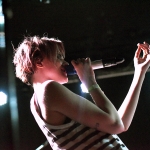 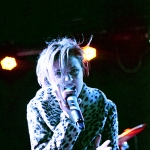 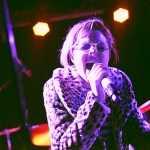 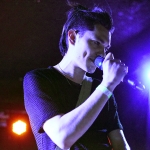