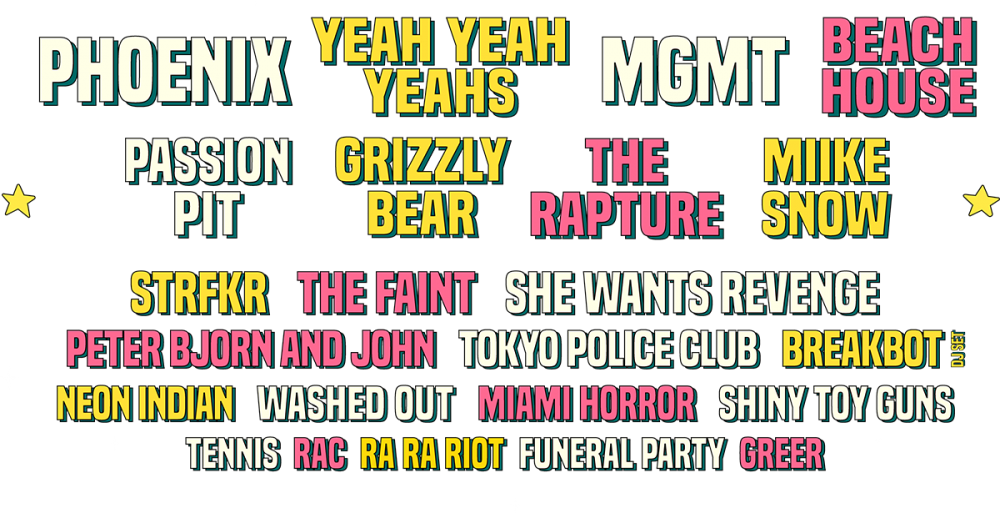 Seemingly out of the blue Just Like Heaven Fest has emerged to offer-up one of the biggest throwbacks of indie-rock of the year with a lineup that lays on the nostalgia rather thick. With synth-pop outfit Passion Pit celebrating the ten-year anniversary of their debut album Manners it appears that other late 00s artists have decided to get onboard this wistful train back to a decade ago. Back then, this lineup would’ve been the kind to decorate a pre-teen or teenager’s dream Fuck Yeah Fest poster—we know it would’ve been ours. With likes of Phoenix, Yeah Yeah Yeahs, MGMT, and Beach House—just to name a few—filling out as headliners to the festival, Just Like Heaven Fest has wrangled together all those indie bands you might’ve filled a mixed-CD with to give to your crush. And if you still find yourself on the fence about JLH Fest, here are five reasons why it is such a sentimental throwback makes it one of the best lineups of 2019 so far.

You might’ve missed it—but if you’ve seen the lineup and are reading this then that’s three times already you’ve been told the Yeah Yeah Yeahs are headlining an actual festival. You haven’t slipped into some alternate reality or had a stroke. Karen O and company will be performing in all their glittery, rabid-rock glory at Just Like Heaven Fest and we don’t think it’s too dramatic to say that passing up on a chance to see them would be insane. Ten years ago “Heads Will Roll” first graced us on their 2009 album It’s Blitz! and the world—and us—haven’t been the same since. And don’t even get me started on 2003’s “Maps.”

Yes. Again, you read that correctly—although if you’re like us you probably needed to pinch or slam a door on your finger to make sure you weren’t dreaming. Like many of the bands on this lineup, The Rapture gifted us with something as beautiful as In the Grace of Your Love a little less than ten years ago and then drifted off the map and was thought to be in a near permanent state of hiatus. As one of the first groups to really breakthrough with the post-punk revival of the early 00s there’s a lot of us who our first taste of—and our continued love of—that odd but deliriously blend of multigenre rock to The Rapture. I once overheard the comment at a Mac DeMarco set to the effect of: “If I hadn’t liked The Rapture, I wouldn’t know what to do with this fucking guy.” And we kind of get that.

3. The Holy Trinity of Synth-Pop.

Well, maybe not exactly a trinity but when you have MGMT, Passion Pit, Miike Snow, STRFKR, and Neon Indian on the same bill together, it’s basically like the second coming. Without a doubt, you had at least two if not all of these artists bumping around on your iTunes as burns from YouTube. While all of us can appreciate the extent of these bands’ discographies—many of them continuing to make music just as synth-giddy as they did back then—it’s safe to say most of us hold onto those first hits that really introduced us to the bands. I can tell you exactly where I was when “Sleepyhead” first popped-up on some Pandora playlist or the welled-up feeling of adolescence that broke through when someone played “Kids” for me for the first time. Or maybe for you, it was “Animal” or good old “Rawnald Gregory Erickson the Second,” or the disco-fever of “Polish Girl.” All veritable classics by now and the moment they were released—you’d have to be a madman to not want to overdose on such poignant nostalgia at Just Like Heaven Fest.

4. Phoenix. Do We Really Need to Say Anymore?

Okay then, how about for starters that Phoenix is still somehow managing to reinvent itself with every new album. This is a band at the top of their game and as festival performers they really stand-alone. Wolfgang Amadeus Phoenix was released—you guessed it—back in 2009 and that album was less an album as it was a collection of bonafide hits. “Lisztomania” to “Armistice,” the lyrics to those songs have been engraved into my soul to the point that even when I think I’ve forgotten them, their melodies have me involuntarily shouting them out whenever they pop on. So yeah, if you go to JLH—you go to see Phoenix.

And lastly—and this is more of a logistics point but that doesn’t make it any less important—but the festival is one day. Now, a schedule has yet to be announced but probably won’t be for some time and neither has a map of the event so it’s unknown how many stages there will be. This might be some cause for alarm and mean some egregious time conflicts—but it also might not. With such a stacked lineup and the way the festival has been billed, it’s hard to imagine festival organizers wanting to force fans to make any hard decisions about who they want to see. One day festivals have a ton of appeal—for one, you don’t have to worry about coming back the next day. But it also offers a more cohesive experience that—if done right—means fans can see most if not all the acts they paid to see. So call up your crush from ten years ago and ask them if they have any plans the weekend of May 4. Because we all know where we’re going to be.