It was a very beautiful Friday night over at the Orpheum Theatre in downtown Los Angeles. The beloved rock band, The National took over the evening for a very intimate and special event. As the last of five, unique shows, Los Angeles received the grand finale.

With obviously high anticipation for this one-of-a-kind show, you can imagine that the tickets sold-out in under a minute. Let me just say there was absolutely no disappointment from the evening as we got to hear almost all of The National’s eighth studio album, I Am Easy To Find, due out May 17th via 4AD.

The evening began with a screening of the film appropriately titled, I am Easy To Find, which is a beautiful collaboration with director, Mike Mills.

Frontman of The National, Matt Berninger casually made center stage and greeted fans and thanked them for coming. He briefly explained the creation of the film which is backed by beautiful music off the upcoming record. Mills actually reached out to The National in late 2017 when they had just released Sleep Well Beast and hoped to collaborate by doing a video or anything! The creative process sounded so beautiful and organic as the two artists worked together cohesively and ultimately Mills produced the 24-minute film which reflects the life of a young woman, played by Swedish actress, Alicia Vikander. Filmed in black and white, but broken up by colorful screen cards which later re-appeared during the band’s performance, the film was emotional as ever.

Following the screening, director Mike Mills thanked the audience for our attentiveness and the band for the amazing opportunity to work with them. Then there was a lovely Q&A with Berninger, guitarist, Bryce Dessner, Mike Mills, and actress Alicia Vikander. As if it couldn’t get more exciting, the Q&A was curated by the wildly talented, Carrie Brownstein. The questions were awesome and Berninger even took a few from the audience.

Following the Q&A was a brief intermission where Berninger insisted that we all “drink a lot” in the lobby.

Then it was time for the grand finale.

The special arrangement took stage for a performance we won’t soon forget. Joined by a beautiful orchestra, The National went straight into the opening track off the upcoming album, “You Had Your Soul With You,” featuring very special guest, Feist! The new record is known to have a lot of female vocals incorporated which is pretty new for the band. Berninger has explained that it’s a collaboration with no true intention of representing “female vocals” but to express that the general idea of the creation isn’t about one single person at all. He jokingly says that he would’ve loved having more male vocals but his ego wouldn’t allow it.

The band was joined on this tour by French vocalist, Mina Tindle, and British musician, Kate Stables. The stage was filled with The National’s large band, those additional vocalists, and a beautiful string orchestra.

It couldn’t get any better … BUT IT DID!

The National continued with new songs from the upcoming record. Berninger rambled with his alcohol-induced banter we all know and love, and then welcomed Phoebe Bridgers to the stage! We are no strangers to the Los Angeles native. It was so rad to see her join the band once again since she last toured with them in September of last year. She joined the other female vocalists in the new song, “Where Is Her Head.” A few more songs came and went, when Berninger welcomed Bridgers back for a special duet of the new song, “Rylan,” which was absolutely beautiful.

The National ended their set with the released single off the upcoming record, Light Years. The video to the song was released earlier this month which pulls scenes from the short film. The song is just gorgeous, tied together with emotionally heavy piano and Berninger’s crooning, achy voice.

The audience sprung to their feet with a roaring applause for an encore. We didn’t want the night to end! Inevitably, the band came back, happily joined by Feist again to perform another new song, “Not in Kansas.”

The room fell silent as the song was so gripping and struck cords throughout the crowd. The energy hit a high as Berninger orchestrated the band as he does, (even handing the front few rows two bottles of wine to share amongst themselves) for four more fan favorites: “The System Only Dreams in Total Darkness,” “I Need My Girl,” “Fake Empire,” and “Bloodbuzz Ohio” when he welcomed guitarist, Richard Reed Parry of the band Arcade Fire to the stage!

The well-known “The National fandom” ensued as fans left their seats and squeezed in between the theatre aisles to get closer to the stage! Again, it was a beautiful evening and we couldn’t have asked for more. If you weren’t able to make it, you can still catch a screening of “I am Easy To Find” followed by a Q&A with Mike Mills and an early listen of the new album on May 7th at the Ace Theatre! Tickets are only $10! After that we will just anxiously await the release of the new record on May 17th and hope to catch the band at the Greek Theatre this September! 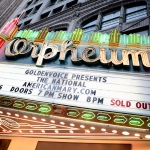 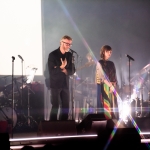 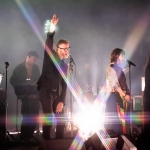 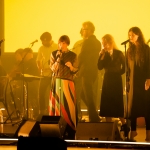 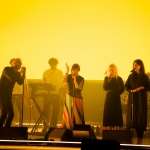 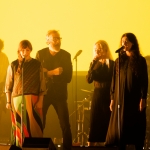 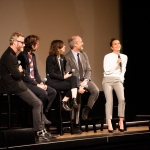 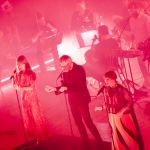 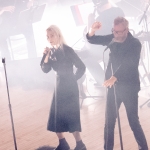 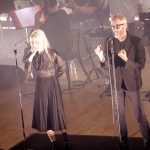 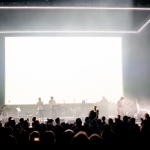 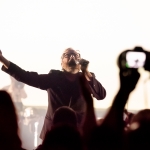 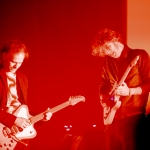 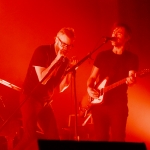 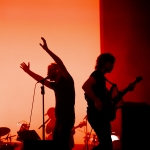 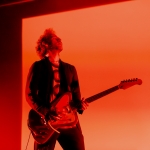 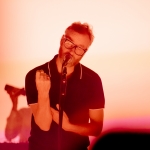 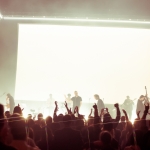 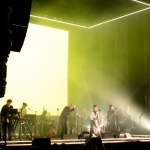 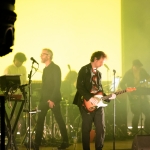