The tiny, disco-ball-flickered stage was packed with instruments, cables weaving intricate webs between piles of amps and stands and rigs. I didn’t envy the untangling the sound guys would have to do later.

April + VISTA took their places behind their respective instruments. April George’s ethereal crooning bloomed, filling the space. She delivered a beautifully controlled performance on her keyboard and violin while MATTVISTA, tweaked and built the complex layers of sonic samples from behind his Moog.

As the duo played, they would look to each other wide-eyed, gauging their cues. The energy was sweet and honest and collaborative. Like a jam band with less patchouli.

April’s lyrical wit feels like a lofi Janelle Monae ballad combined with Solange’s moody melodies, relaxed on thick, trembling bass lines. The intense violin bled into psychedelic sampling, and wild, experimental howling. One of the songs consisted of April scatting and playing with her vocals. Her range is absolutely incredible. I could listen to her babble and belt into a microphone for hours.

I had absolutely no expectation for Little Simz’s vibe before this show. I mean, I did a little bit of sampling off her top played on Spotify. No MP3 could prepare you for the experience that is seeing this feisty, firey soul share her story with the world through the angry, powerful medium of North London rap.

The band wore all white matching overalls and hypebeast-y running shoes with thick orange soles. The first song erupted a funky thunder of wubby bass while Little Simz paced around on the stage rapping through a loud speaker. The sound is totally it’s own thing, like Skepta with a Rootsy backing band and a little bit NWA “fuck it” anarchy.

“STOP FUCKING WITH MY HEART” she screamed at us.

Little Simz’s doesn’t want you to read between the lines. She’s happy to spell it out for you:

As a twenty-something in Trump’s America, we have plenty to be angry about, and Little Simz is here to support the rebellion and the healing that comes with standing our ground as a generation. Her sharp, snappy dug straight into the bloody heart of a topic, the ska-influenced Wounds refrained, “gunman, where you get your gun from? I wonder if in America or inna England.”

Little Simz took up a bass to allow her DJ, OTG, some beautiful backup. The band whipped up a groovy little instrumental bubbling with familiar samples from the 90s and early 2000s for a final jam that delt like a solid summer kickoff. 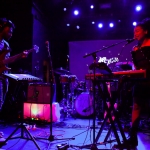 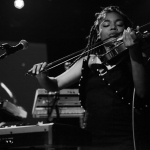 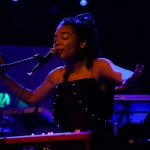 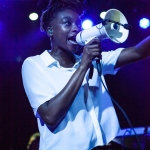 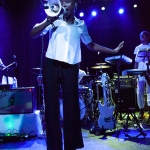 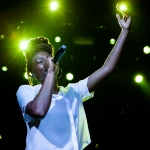 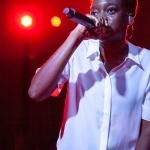 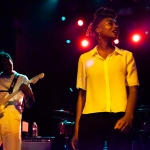 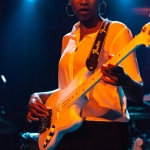 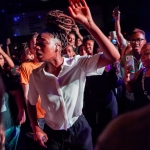 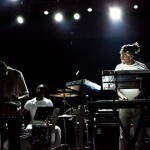