Cal Jam ’17, the lovingly curated festival put on by Foo Fighters, made its debut in San Bernadino, CA this past weekend as it unleashed its wildly anticipated lineup of some of rock’s biggest ambassadors. It was a night of giants, with Dave Grohl and company closing out the night with the likes of Queens of the Stone Age and Cage the Elephant, while day-time acts on the Sun and Mountain stages sated early arrivers’ palates for the inflamed rock bombast to come.

Starcrawler and Fireball Ministry both reinvigorated those rock sentiments in the middle of the afternoon heat, while the gothic blues of Adia Victoria opened up the crowd to the talents playing on the Mountain stage. On the main stage in the Glen Helen Amphitheatre, the English rock-band The Struts introduced their wildly passionate glam-rock sheen with plenty of gusto as lead-singer Luke Spiller strutted his stuff onstage. A true student of performers like Queen and Aerosmith, Spiller and his band dazzled away, playing their collection of reimagined rock anthems with a stringent pop-flare for the crowd who absolutely ate it up as an appetizer of what was to come.

Over on the Sun stage American garage-punk band White Reaper tore it up and pieced it back together again with their virulent brand of unhinged rock sentiments. UK rock favorites Royal Blood kept the anthemic noise going on the main stage, where every band’s performance seemed to further build the anticipation and throne from which Foo Fighters would eventually take the stage that night. The duo from Brighton subdued the crowd with the affecting potency of their bluesy-psychedelic rock tastes, while Wolf Alice followed-up their set with the sublimely rapturous performance helmed by the furious Ellie Rowsell. A force of nature onstage, Wolf Alice was one of the first acts of the day to tap into that crowd-igniting energy that just bleeds a glorious rock purity. Matt Schultz of Cage the Elephant was another to truly dig past the skin and get into the gleefully primal emotions of rock’s kinetic powers, one owed to the singer’s singularly wild onstage antics. A Cage the Elephant show is not the same without Schultz ritualistic losing an article of clothing with every song–the man sings and performs like his actual life depends on it and the crowd never fails to absolutely lose their minds as he loses his. Schultz then punctuated the recent loss of Tom Petty, a cloud that hung over the festival and the rock community at large along with the recent Vegas shooting, with a purposefully impassioned cover of “Mary Jane’s Last Dance.”

One of the defining if slightly overlooked statements made by Cal Jam’s lineup of artists was the apparent emphasis on the relationship between the American and British rock scenes, as it featured some of the biggest and forward-thinking names in both. No other artist was more a testament to this than Liam Gallagher, whose appearance at the festival greatly bridged the two biggest spheres of influence in the rock world. The brunt of Gallagher’s performance really lies in the weight of his music and its intense resonance with the crowd, as well as a voice that is dually icy and tender.

Canadian rockers Japandroids mixture of classic rock and punk made immediate fans over on the Sun stage, barraging the crowd until they were won over by duo Brian King’s and David Prowse’s unrelenting vigor. The night continued to culminate towards what would be a sonically epic finale, with the last few hurrahs leading up to it including performances by Bob Mould and The Kills. Another great dichotomy at the fest was this seamless placement of rock vets alongside it’s newer manifestations, with both Mould and The Kills capturing two very different images of both. Alison Mosshart and Jamie Hince never fail to put on a killer show, preferring to wear the passions behind their saucy blues-rock burners on their sleeves, chest, and tongue, spitting them into the crowd along with a ton of sweat. Swirling with an aggressively sexual and viscerally honest fervor, the dynamics between the duo seeped into the crowd as Mosshart’s smoky vocals melted fans. As one of the more vocal forces of rock in the 2000s, The Kills have a legacy of bridging the generational gaps of rock–and Cal Jam was if anything besides a stunning spectacle, a testament to rock’s unifying nature.

In an echoing of this sentiment, there was a moment during Queens of the Stone Age’s set in which Josh Homme lifted up a fan’s sign that said “Vegas Strong,” before flipping it over to reveal the handwritten names of all 58 of the victims’ names from last week’s shooting. It was a quiet moment of recognition, both of what the festival was trying to help fans escape from and also reminding in tender chastisement that we could truly never leave it behind. Queens of the Stone Age then proceeded to begin the demolition of the Glen Helen Amphitheatre, playing a variety of hits that both galvanized and enlivened the crowd like a live wire. Whatever weariness from the heat was completely eradicated–hell, pretty much everyone in the crowd would’ve come to just see QOTSA and Foo perform back to back, so the moment the former started it was like being born again.

Grohl, the unofficial ambassador and steward of rock, gave the crowd a few surprises throughout the night, including Aerosmith guitarist Joe Perry and then Gallagher for a cover of the Beatle’s “Come Together.” Between the laundry list of anthems that Foo Fighter’s emptied into the crowd, the amped-up message of solidarity amongst artists and their fans that Cal Jam hinged itself on started to surge rather manically between songs like “Times Like These” and “Learn to Fly.” Free of the leg injury that plagued him on Foo Fighters’ previous tour, Grohl joined his band in acting out the emphatically colossal sound that they generate, ripping into guitar solos and articulating every hammer-on with his contorted expressions. Hot and heavy, Foo Fighters take their position seriously and have no qualm in spending their time at every show cementing themselves as one of the biggest forces in rock today. One minute they’re dissolving faces with their configurations of dueling electric guitars and Taylor Hawkins madcap drumming, and the next they’re soaring through lofty anthems that weep of classic rock nostalgia. With a maddeningly large discography, Grohl promised a long night of rock-‘n’-roll and that’s just what they gave fans, somehow managing to find that elusive moment between head-banging escapism and lucidly emotional tenderness that was so desperately needed by those in attendance–both those on and off the stage. 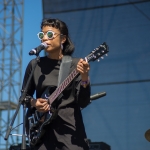 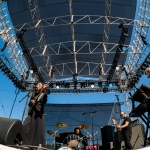 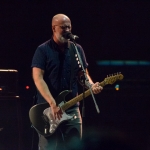 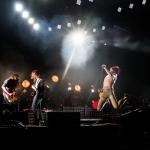 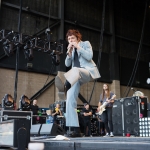 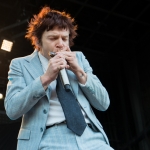 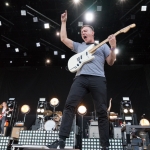 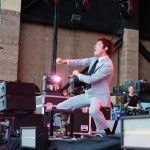 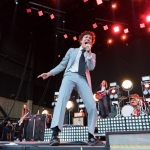 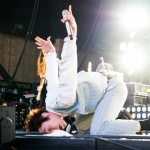 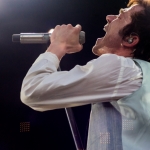 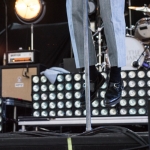 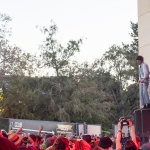 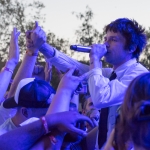 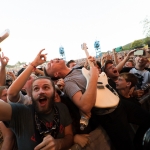 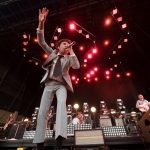 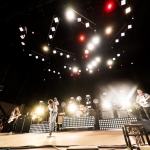 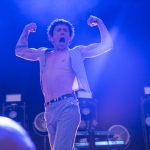 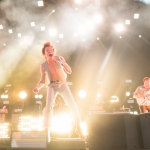 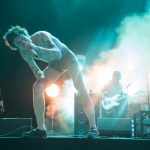