This Sunday was a good day for audiophiles. While Drake was busy getting booed off stage over at Camp Flog Gnaw, fans of progressive electronic were gathered at the Hollywood Forever’s Masonic Lodge to watch a string of visionaries perform: TEEBS, Anna Wise and YUK. YUK delivered an impressive DJ set. The crowd vibes with […]

This past Tuesday was legendary! Hozier finally got the chance to perform at Hollywood Forever after literally being blown out by winds. This past April Hozier was scheduled to perform a sold-out show at the Hollywood Forever Cemetery. It was a beautiful but windy day and when I picked up photo-pass the list blew out […]

What better way to bring in the weekend than with some of our favorite alt-rockers, Death Cab For Cutie? The correct answer is no better way. We were lucky enough to catch the Washington-natives’ special show at the Hollywood Forever Cemetery right here in Los Angeles. The intimate lawn setup can be creepy at times but […]

We’ve said it once and we’ll say it again: the ethereal concerts that are held at the Hollywood Forever Cemetery never cease to disappoint. This time around the guests of honor at the evening soirée amongst the tombstones was dream-pop duo Beach House—and a more perfect marriage of sound and atmosphere could never have been […]

There was something wistfully poetic about the Arctic Monkeys making their return to Hollywood via a blistering sunset serenade amidst a collection of stone mausoleums in one of the city’s oldest cemeteries. Fronted by the irrefutably suave Alex Turner, the band has always exuded a certain melancholic sexiness, yet their performance at the Hollywood Forever Cemetery […]

Los Angeles just can’t seem to get enough of Ty Segall. The multi-faceted human is pretty much in high demand, always. Whether with the Muggers, GØGGS or solo, there isn’t a show Segall doesn’t sell out. Just a couple weeks ago he headlined The Smell’s benefit show at the Teragram Ballroom and it quickly sold-out. […]

Nestled in the Hollywood Forever Cemetery, the very quaint Masonic Lodge flooded in with listeners of all ages on an extraordinary Tuesday evening. Better known by his stage name, Passenger, Mike Rosenberg was back in Los Angeles. This being my fourth or fifth time seeing this musician, you could say I was pretty excited. I’ll […]

CHVRCHES are back in Los Angeles with an outdoor show at the Hollywood Forever Cemetery on Monday, October 3. If you missed any of CHVRCHES recent April gigs, here’s your chance to see the Glasgow indie pop stars once again in L.A. In addition to CHVRCHES new L.A. date, the band has also announced new […] 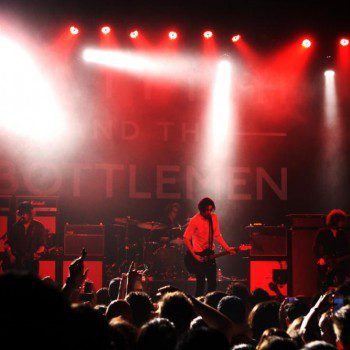 Catfish and the Bottlemen announce intimate May date at Hollywood Forever

Rising British rockers Catfish and the Bottlemen are returning to Los Angeles for an intimate date at the Masonic Lodge at Hollywood Forever Cemetery on Monday, May 3. The show comes a little more than three weeks before they drop the follow-up to their esteemed 2014 full-length debut The Balcony. Titled The Ride, the album drops May […]

It’s been three years since his critically-acclaimed debut album Long Way Down was released, but singer-songwriter Tom Odell has finally put together the follow-up. Wrong Crowd will be released June 10 via Columbia Records, and with that announcement, Odell has also booked a number of intimate gigs, including one May 6 at the Masonic Lodge […]